After World War One the enforced setting of design and testing work had an impact on all German ship constructions of WW2 . The German warship designers had been denied not only to evaluate the lessons from warship construction of World War One, they lacked also of the indispensable for new concepts by practice. In addition, they could not carry out comparative tests, reviews and leading to the trial destruction of foreign ships of trials like the Allies did in the early 1920s.

In the late 1920s the German shipbuilders therefore started with a considerable backlog compared with their colleagues in other major powers. When designing the Gneisenau and Scharnhorst they could still fall back on the design for the Mackensen class dating from the World War One. But for a modern, sufficiently fast ship of the desired size there was no suitable design from World War One. While the Gneisenau class comparable foreign ships were either smaller (as the French Dunkerque class) or had been built in World War One, the new battleship should be superior to any rival, of which most were the result of decades of research and development work, the Germans simply missing. They had not even the time to catch up this lead. Theoretical Studies on a battleship had been recorded in 1933.

The Anglo-German Naval Agreement of June 18, 1935, gave the Germans plenty of still available battleship tonnage to construct three battleships each of 35,000 tons standard displacement. The construction contracts for two units were awarded in early 1936. Under the pressure of time the German shipbuilders used as the basis for the new ships the draft of the Baden class from World War One. The plan had to be increased to meet the demand for increased speed by 6 knots, the enormous strength of the anti-aircraft weaponry and an improved torpedo protection. In the last-mentioned property the planners came in good stead, because they had to keep the draft as low as possible because of the flat German coastal waters. As with the Japanese Yamato class they therefore widened the hull, so that an excellent torpedo protection could be incorporated into the ships. 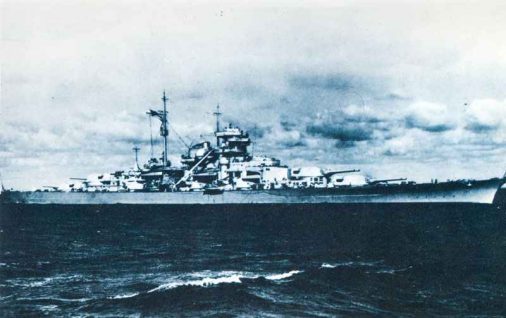 The battleship Bismarck, launched on Februray 14, 1939, is seen here during her extensive trials, which were carried out from Kiel, in the Baltic, between August 1940 and May 1941. 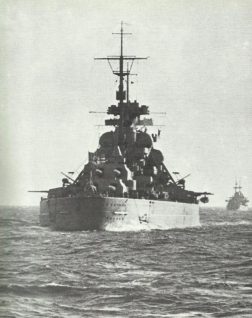 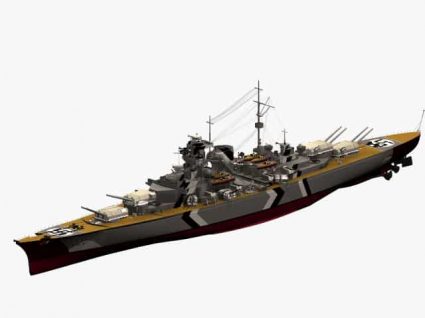 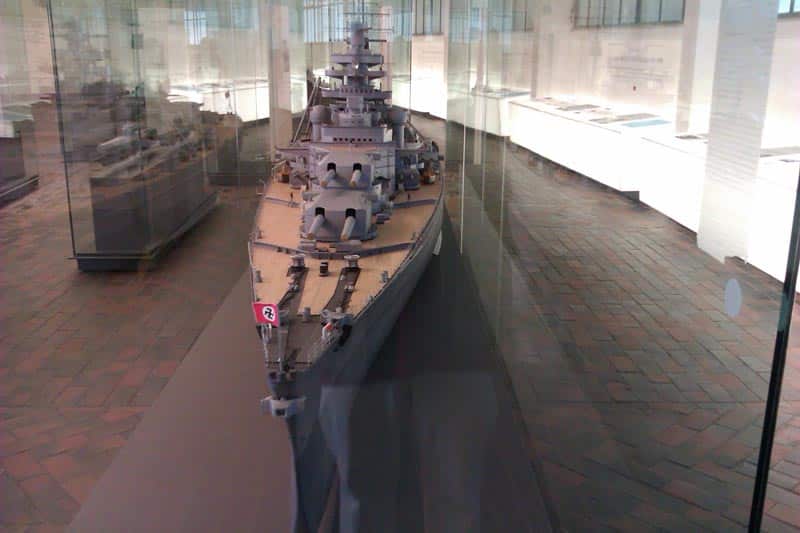 Although the result was an undisputed strong war ship, the battleship Bismarck could have to be even more powerful. The lack of research on protection systems meant that contrary to foreign rivals, in which the main armored deck sat directly or close to the armored belt and thus the telecommunications equipment protected, it was at Bismarck near the ship’s bottom. This means, her communications were literally unprotected, a fact that contributed to their quick and easy destruction by the British battleships Rodney and King George V.

Just as it had been felt at the German ships 25 years before during the Battle of Jutland, the Bismarck was missing the necessary protection of the rudder system, which made her the escape impossible. Inadequate research in the field of multi-purpose medium caliber weapons meant that the Bismarck received separate medium and heavy anti-aircraft batteries, which in turn made her much too large for her armament. Not carried out research work also meant that the German armor could not compete with the British or American standards. Her armored conning tower, which was theoretically protected against by battleship artillery, was switched off at an early stage of the battle by a British 8-in-shell. Like most heavy German units of WW2 the Bismarck had – considering to her size – poor sea-going properties. Finally, there were within the German shells too many duds: just one of the shells, which hit HMS Prince of Wales, detonated as planned.

But the draft of the Bismarck had also some good points, however. The fire control system was quite good, especially that for the anti-aircraft guns. She also had a radar for her artillery. It proved extremely difficult to bring her to sinking (although this was much less important than the ease with which she could be put out of action). Only after the crew detonated explosive charges and the cruiser HMS Devonshire achieved torpedo hits, she finally sank.

Bismarck launched on February 14, 1939, at the Blohm & Voss shipyard in Hamburg and entered service on August 24, 1940. She started immediately thereafter with intensive sea trials in the Baltic Sea until May 1941.

Seven sinking and last minute victory with the battleship Bismarck in the F2P game World of Warships (WoWs):

(7)
$979.90
PROVEN-PERFORMANCE – Made for the modern family, the HP Pavilion Desktop PC brings the latest technology and reliability from a trusted brand that protects what matters to you most. DURABLE AND STYLISH – Ditch the dull black box with a polished silve... read more
(as of November 29, 2021 23:02 GMT +02:00 - More infoProduct prices and availability are accurate as of the date/time indicated and are subject to change. Any price and availability information displayed on [relevant Amazon Site(s), as applicable] at the time of purchase will apply to the purchase of this product.)

(738)
$319.99 $196.89
Get high performance when you need it - the Chromebook Flex 3 boots up in seconds and features easy-to-use Chrome OS, plenty of memory and storage, and so much more Sleek, stylish, and secure, this 360⁰ convertible laptop is less than 1-inch thin and... read more
(as of November 29, 2021 22:59 GMT +02:00 - More infoProduct prices and availability are accurate as of the date/time indicated and are subject to change. Any price and availability information displayed on [relevant Amazon Site(s), as applicable] at the time of purchase will apply to the purchase of this product.)

Among Us: Crewmate Edition - Nintendo Switch

$29.99
Crewmate Edition Includes: See description below for complete details Life as a Crewmate: Complete all your tasks on the ship to win but watch out for Impostors! Report dead bodies and call emergency meetings to vote the Impostors out. Hope you chose... read more
(as of November 29, 2021 23:14 GMT +02:00 - More infoProduct prices and availability are accurate as of the date/time indicated and are subject to change. Any price and availability information displayed on [relevant Amazon Site(s), as applicable] at the time of purchase will apply to the purchase of this product.) 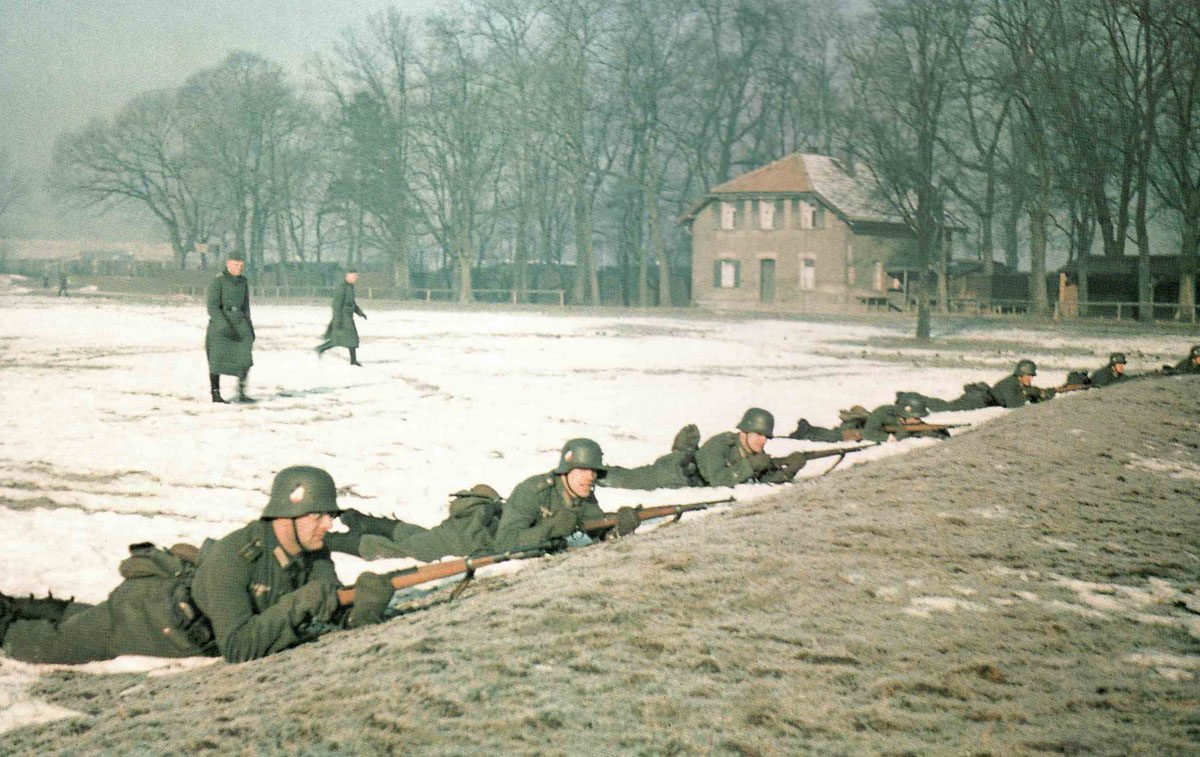