The US Carbine M1 has its origins in the year 1938 due to a demand of the American infantry for a light rifle, comparable to the carbine of the cavalry of yesteryear. This weapon was intended to replace the standard rifle and pistol used by drivers, machine-gunners, mortar teams, officers, artillerymen, telecommunications soldiers, specialists, vehicle crews, cooks, field priests and other members of the armed forces whose primary action was not as rifle men. Because the standard M1 Garand rifle was too heavy and too big and the Colt M1911 pistol did not have sufficient range and effectiveness.

However, this claim was rejected, undoubtedly for financial reasons. After the outbreak of World War II, however, the application was resubmitted in 1940 and this time was received more favorably, as the US Army was now expanded and production of the standard M1 Garand rifle was already strained to the extreme.

By October 1940, the design specifications had been prepared and passed around to numerous gunsmiths. In addition, Winchester received an order to design a special ammunition cartridge to shoot a 110-grain (7.128 gram) bullet at a speed of 1,860 feet (567 meters) per second. This was officially called the ‘.30 Short Rifle Cartridge’ and was largely based on an older commercial cartridge, the ‘Winchester .32 Automatic Sporting Rifle Cartridge’.
It was a pistol-like .30 caliber cartridges, but with increased power, which allowed shooting up to 330 yards (300 meters).

Eleven companies submitted weapons for testing. Some were immediately rejected. Others, which looked promising, were sent back for further development work and finally seven were admitted to the tests.
From these, the Winchester design was accepted, which used a modification of the bolt of the Garand rifle with a gas piston with a short stop, originally developed for a potential military rifle. The Garand design was perfected by David M Williams.

The gas pressure function used a captive piston which covered a distance of one-third of an inch (about 85 mm). The piston strikes an operating slide, which provides enough energy to push the slide back against the force of the return spring. The backward movement of the bolt also cocks a hammer before the spring pulls it back, loading a new cartridge and locking the bolt.

The self-loading carbine M1 was introduced in October 1941 and in the spring of 1942 it began mass production in nine factories. Almost 6 million carbines were produced there by the end of the Second World War, more than the standard M1 Garand rifle in the American armed forces.
During the war, the design was further perfected, including a simpler visor and bayonet holder.

The opinions about the carbine M1 in use differed. It was undoubtedly a very easy weapon to handle, light and easy to use and to store everywhere, e.g. in vehicles or airplanes. However, the bullets were more like a pistol than a rifle, so as a result the accuracy was not satisfactory at longer range distances. The weapon was only effective up to about 110 yards (100 meters). The effectiveness of the projectiles after a hit was also somewhat lacking.

Nevertheless, the German Wehrmacht was sufficiently convinced of the weapon that it would use the numerous captured specimens under the designation ‘Selbstladekarabiner 455a’ in the last phase of the war in Europe.

Also, the US Marines in the Pacific took over more and more the US carbine M1 also with the combat troops, because it represented a smaller load in the jungle war than the standard rifle and here the relatively short range was not a too big disadvantage.

Despite the mass production during the war, the M1 was hardly used afterwards. Many police units used it later, but mainly because of the weak bullet, which was safer in most situations than more powerful cartridges. Typical for this was the Royal Ulster Constabulary in Northern Ireland, which used the M1 carbine against the IRA.
Another problem is the spread of the .30 cartridges. During the war the cartridges were produced in millions, but since it was hardly used for any important weapon system afterwards, there is hardly any supply of it.

M1A1: Like the M1, but with a pistol grip and a folding skeleton stock. This version was intended for the parachute troops and was built from May 1942 until the end of the war in a number of approx. 140,000 pieces. 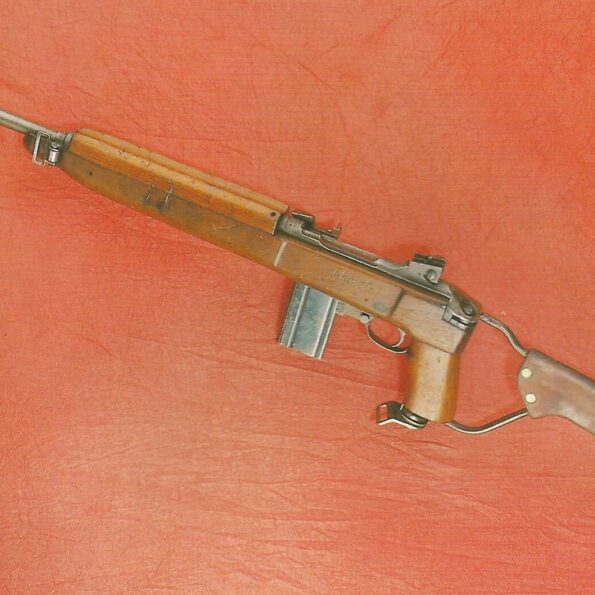 US carbine M1A1 for paratroopers. 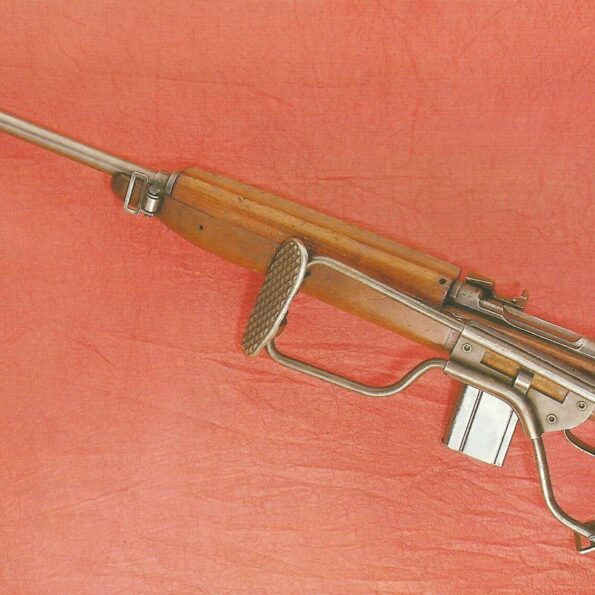 M2: Version with fully automatic fire. It corresponded to the M1 except for an additional selector lever on the left side for the fire mode. Standardized in September 1944 and a special 30-round magazine was developed for it. The cyclic fire rate was about 750 rounds per minute. The weapon did not appear with the troops until the end of the war, and a total of 550,000 of them were built, most of them after the Second World War.

M3: An M2 to which the open sights was removed and instead an infrared telescopic sight ‘Sniperscope’ was attached. Standardized in August 1945, only 2,100 were built.

T3: The development model for the standard M3.

T4: The development model for the standard M2.

Specifications for US carbine cal.30 M1