The B-17 Flying Fortress was already legendary in its time. This Boeing aircraft represented more than any other the power of American aviation and that already in the years when Europe was overrun by the Axis Forces.
A total of 12,731 Flying Fortresses were produced during the Second World War. During the war, they made aviation history when they began daylight attacks on targets in Western Europe on 17 August 1942. Then, on 27 January 1943, the daylight attacks on Germany itself began, while the Avro Lancaster, Handley Page Halifax and Stirling bombers of the RAF appeared during the night. Among the targets of the B-17 bombers were Wilhelmshaven, Schweinfurt, Wiener Neustadt, Regensburg and Berlin. Over these cities the sky was filled with several hundred bombers in formation flight, together with the burning wrecks of crashing flying fortresses. Thousands of people died and cities were razed to the ground.

Boeing engineers had an advantage from their previous experiments in the construction of the Model 247 civil transport aircraft and the development of the Model 294 bomber. Therefore, they took the high financial risk for the company and selected four 750 HP Pratt & Whitney Hornet engines for the aircraft. This enabled the aircraft to fly faster and higher with the specified bomb load. The crew consisted of eight men and the bomb load consisted of up to eight 500 lb (227 kg) bombs, so in total even 4,000 lb (2,176 kg).

The prototype first took to the skies on 28 July 1935. Less than a month later, during a transfer flight, the new aircraft showed what it could do. The prototype of the B-17 flew thereby over a distance of more than 2,100 miles (3,400 kilometers) non-stop within nine hours. This flight of the Flying Fortress at a cruising speed of 230 mph (374 km/hr) to Wright Field was the beginning of a new era in aviation history.
However, the aircraft was destroyed in an accident during take-off on 30 October.

Thirteen pre-series aircraft were built for tests. The first of these YB-17 flew for the first time on December 2, 1936 and the others were delivered to the 2nd Bomber Group for testing between March 1 and August 5, 1937. These planes were fitted with Wright Cyclone engines.
Another airframe, originally intended for static tests, was equipped with four Wright engines equipped with compressors and designated as YB-17A. The performance of this aircraft was so promising that the compressors became standard on later production models. The static tests had been cancelled because a YB-17 had flown through a heavy storm without the slightest damage. So all YB-17 were retrofitted with exhaust gas turbochargers to achieve better flight characteristics at high altitudes.

The first order for serial production was received in 1938, when 39 B-17B were ordered. These series aircraft had a new nose, larger rudders and larger landing flaps. Nevertheless, the wing loading remained moderate and the outstanding characteristic of all B-17 was the calm flight attitude.

A second order in 1939 included 38 B-17Cs with stronger armament by machine guns in the sides, armor protection for crew positions, self-sealing fuel tanks and a lower hull.
To gain combat experience with the aircraft, 20 aircraft of this model were handed over to the British Royal Air Force. The 90th Squadron of the Bomber Command used them in only one day attack from high altitude, with the Norden target device prone to failure, the Browning machine guns frozen at high altitude and the German fighter planes could not be engaged from the rear during their attack. So these bombers, called Flying Fortress I by the British, were subsequently only used by the Coastal Command and in the Middle East.

In 1940 a further 42 B-17D were ordered, which were similar to the previous model, but improved.
These last two versions of the Flying Fortress were also the first to see combat missions. The B-17s were used by the British from May 1941 without great success and after the Japanese attack on Pearl Harbor by the Americans. However, most B-17s in Hawaii were completely destroyed in the Japanese attack in December 1941. But the surviving bombers flew the first American air offensive of World War II when they attacked Japanese shipping on December 10, 1941.

The version of 1941 was the B-17E, which was extensively modified due to British combat experience. The entire rear section was radically modified to achieve greater stability, especially at high altitudes. In addition, space was made for a defensive armament in the rear. The armament was strengthened by the addition of two mechanically driven machine gun turrets, one on the upper fuselage and one under the belly. Both turrets had twin 12.7 mm machine guns, and another machine gun was installed on each side of the hull. Two manually operated light 7.62 mm machine guns were installed on each side of the transparent nose.
The aircraft also had larger rudders to drop bombs with sufficient accuracy even from high altitudes, and improved armor protection and equipment.
Altogether 512 B-17E were built. They appeared first over the Pacific in early 1942 and in July of the same year over Europe with the units of the 8th US Air Force stationed in Great Britain. On August 17, 1942, these planes made the first attack on a European target and bombed Rouen in France by daylight.
This model was also the first to be built at Lockheed-Vega and Douglas-Tulsa in addition to Boeing.

The next model was the B-17F, which appeared in 1942. This bomber, of which 3,405 were built, had an even heavier armament and some other modifications. These included a long Plexiglas nose, paddle-shaped propellers and devices for underwing loads.
The companies Lockheed and Douglas helped with the production of this model and built 500 and 605 pieces respectively. The rest was produced in the Boeing factory in Seattle.

Some B-17F were equipped with additional machine guns and flew as protection for the bombers. They received the designation YB-40 Flying Fortress.

The most common and last variant of the Flying Fortress was the B-17G. This final model of the bomber was built since the end of 1942.
Boeing built 4,305 of them, Douglas at Long Beach 2,395 and Lockheed in Burbank 2,250 copies. The Boeing factory in Seattle produced up to 16 pieces of this bomber daily and most of these aircraft were sent to Europe from 1943 on.
The B-17G had a stronger defensive armament with an electrically powered turret under the nose, directly under the Navigator bombardier’s seat. In addition, well-positioned side machine guns were added.

At least 25 of the bombers were equipped as BQ-7 with remote-controlled Aphrodite missiles with 12,000 lb (5,500 kg) of highly explosive material to fight against German U-boat bunkers. Many aircraft of the F- and G-series were also equipped with HX-radar, whereby the radar head could be retracted into the bow or the rear part of the fuselage.

The crews preferred the older B-17 Flying Fortress over the newer and more modern B-24 Liberator, because the former was much more pleasant and easier to fly and could take more battle damage.

Operations of the B-17

One of the most important and significant attacks of the B-17 Flying Fortresses was directed on August 17, 1943, against the German ball bearing industry in Schweinfurt and the Messerschmitt factories in Regensburg. Due to the two targets, the effect of the 376 Flying Fortresses launched in total was fragmented.
The 146 B-17 with the goal Regensburg should fly the first pendulum mission with additional fuel tanks on the route via Italy to Bone in Tunisia. However, the escort fighters of the type P-47 Thunderbolt could only fly up to Aachen because of their limited range. In addition, the coordination of the departure time of both units was not correct, so that the German fighters could refuel after fighting the first group and then attack the second one.

Despite the strong defensive power of a combat box of 18 Flying Fortresses, the German fighters soon found that the B-17 was the easiest to attack directly from the front. From about 650 yards (600 meters) they opened fire for two seconds before they had to pull up. For this the German Luftwaffe used Ju 88, Do 217 and He 111 armed with air-to-air missiles against the bombers for the first time.

During this Operation ‘Double Strike’, 59 Flying fortresses were shot down and 100 heavily damaged, while 25 German fighters were lost. This was the heaviest defeat of the American bomber units in Europe and made it clear that despite the strong armament of the B-17 and its robustness, deep daytime operations over Germany were hardly feasible without sufficient fighter protection.
For the next five weeks no more American bombers appeared over the German territory and only the appearance of the P-51 Mustang at the end of the year changed the situation fundamentally.

Various experimental versions were also built, as well as an F-9 photo reconnaissance aircraft, the PB-1G search and rescue aircraft with dinghies, the CB-17 transport aircraft, the XC-108 command transporter, the PB-1W early warning aircraft, and the OB-17 target drone.

The United States was not the only country using the Flying Fortress. During World War II, the British RAF received just over 200 Flying Fortresses, 20 of which were B-17Cs and the rest B-17E, F and G models. These planes were used by Bomber and Coastal Command and remained in service until the end of the war.

The Germans captured about 20 Flying fortresses, some of them intact and some damaged. They were assigned to the ‘Ghost Squadrons’ of the Kampfgeschwader 200 and used to test improved attack tactics for fighter planes. Some planes were also used on secret missions, either without national insignia or with fake USAAF markings.

After World War II, some surviving B-17Gs were used by Israel, as well as by the air forces of Brazil and the Dominican Republic, while other Flying fortresses were converted into fire-fighting aircraft for fighting forest fires. 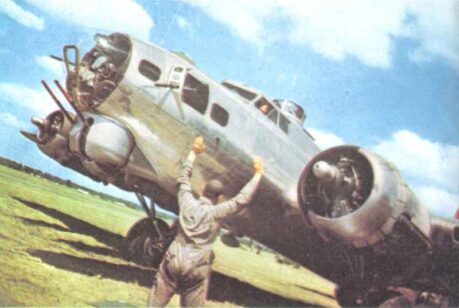 ‘Stop’ waves a ground-crewman to the skipper of a red-tailed G-model on the green grass of a British base. 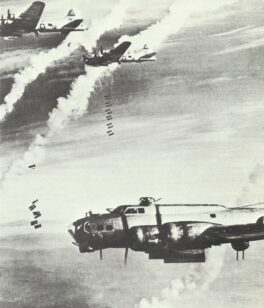 B-17 Flying Fortresses in the large-scale attack around noon on the city center of Berlin. The smoke bombs have marked the objectives. 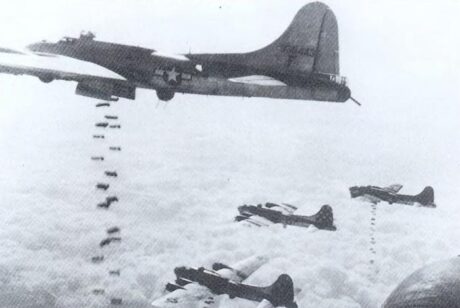 B-17 Fyling Fortress dropping bombs on a target in February 1945. 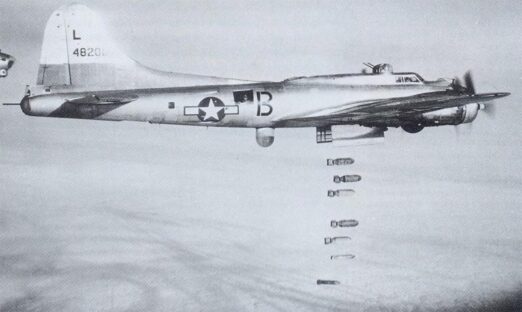 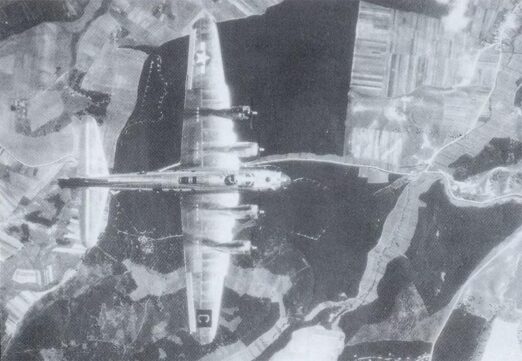 An overhead view of a 96th BG B-17G Fortress en route to its target. 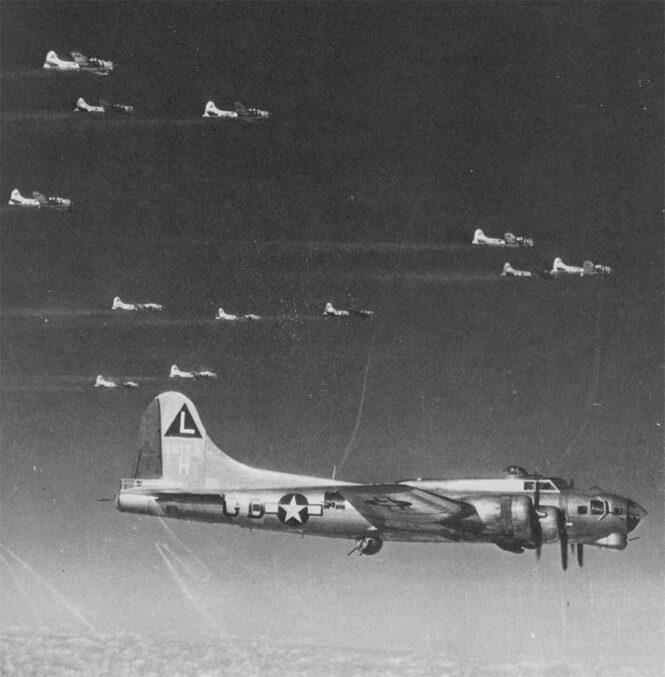 Boeing B-17G Fortress of the 381st BG heading for their target. 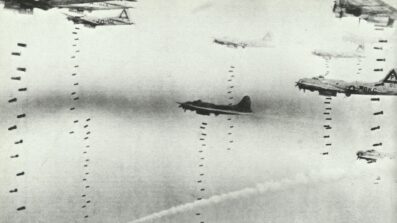 An entire air armada of B-17 Flying Fortress and B-24 Liberator bombers, which were making emergency landings during the war in Switzerland. In total, there are 186 four-engined US bombers that are given free by Switzerland only after the surrender of Japan. 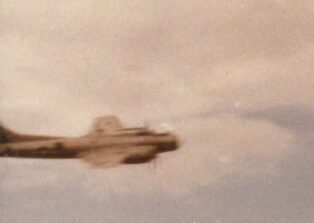 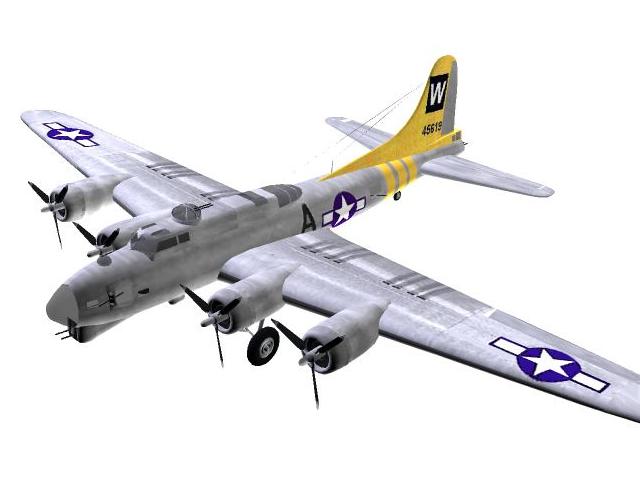 Specification for Boeing B-17 G Fortress