Strength and organization of the Armed Forces of Greece 1940-41.
Divisions and equipment, aircraft of the Air Force and ships of the Navy.

From 1938 until the German invasion, Greece was a constitutional monarchy under King George II, but the actual power was in the hands of her right-wing dictator-President General Metaxas.

The Greek armed forces, like most of those of the smaller nations, suffered from a shortage of modern weapons and motor transport. However, the mountainous frontier with Albania was ideal for defensive fighting, and the natural sturdiness of her soldiers proved too much for the Italian forces which invaded on 28 October 1940.

The initially outnumbered Greek forces were able not only to contain the Italian attack, but force the invaders back into Albania, where, with the British aid in men and material, they were able to hold them until the Germans invaded from Yugoslavia and Bulgaria on 6 April 1941. This attack, by the best army in Europe, overwhelmed the Greek defenses, and despite bitter resistance the Germans forced the Greek Army in eastern Macedonia to capitulate and the Allies to retreat. On 20 April the Greek Epirus Army surrendered and on 22 April the Allies began their evacuation of Greece.

The Commander-in-Chief of the Greek Armed Forces was General Papagos and the control of the Army was exercised by a General Headquarters and five Army Corps areas.
In 1940, just before the Italian attack, Greece mobilized her armed forces. The field army was organized in two Army Groups, six general headquarters, six infantry and nine mountain divisions, four mountain brigades and one cavalry division.
At the outbreak of war the Army numbered 430,000 men, but losses were heavy and some 60,000 men were killed, wounded or missing after the winter fighting.

Divisions of the Greek Army:

The crack infantry of the Greek Army were the Evzones. Originally formed as light infantry during the war for independence at the beginning of the 19th century, these highlanders became part of the regular army in 1833. In 1940, they served in light regiments and in the Royal Guard.
In addition to the line infantry and mountain regiments there were a number of battalions and companies for island and land frontier defense, as well as a number of mobile and static machine gun units.

In March 1941, total strength was 540,000 men, but this included 50,000 recruits with only one month’s training. The German invasion cost the Greeks 15,700 battle casualties; about 220,000 Greek soldiers were taken prisoner, but released soon after. 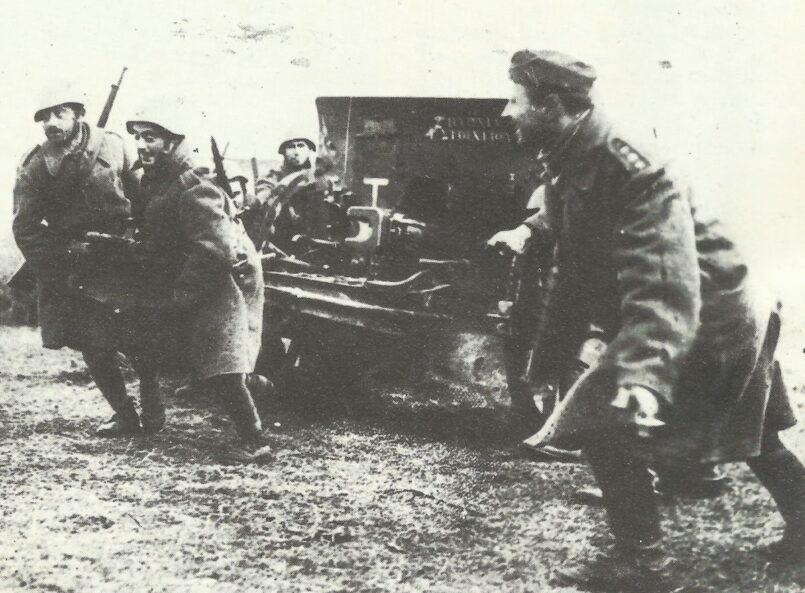 A Greek captain urges on his men as they shift a field gin in Epirus. 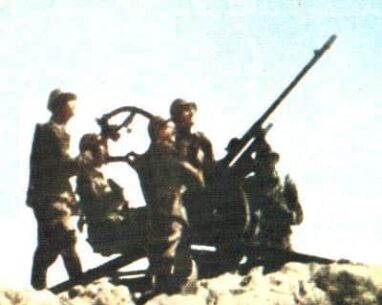 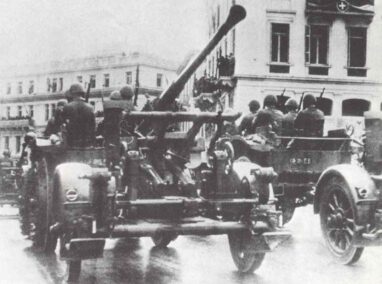 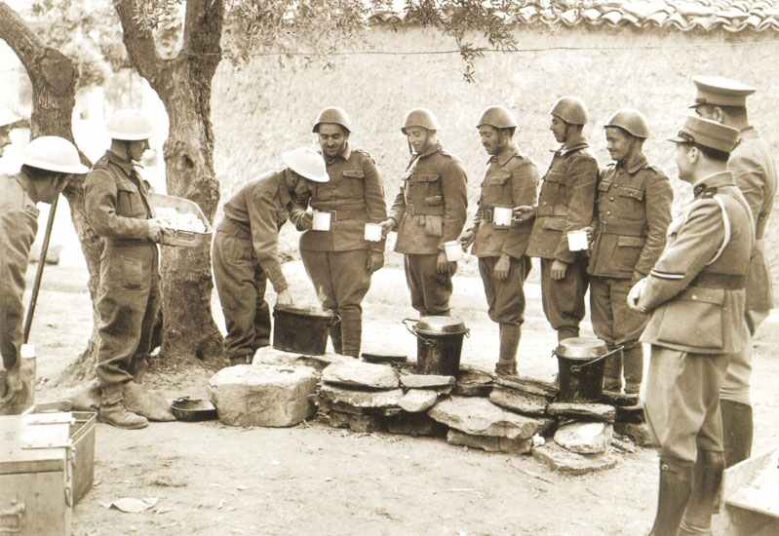 British artillerymen (left) handing out tea and bread to Greek soldiers at Canea, Crete in November, 1940. A Greek officer and a policemen were watching on the right. 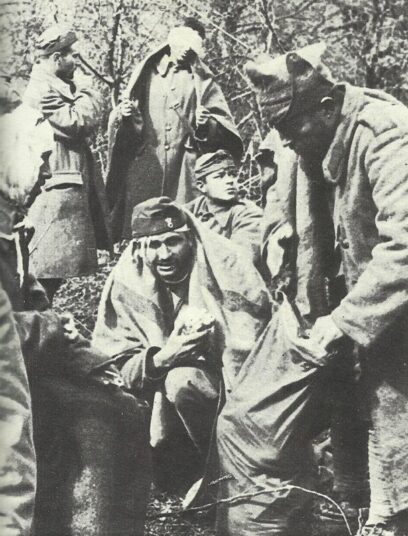 Since the artillery was equipped with either French, German or Czech guns Britain was unable to supply ammunition, and stocks in America were soon exhausted, so all the British could do was supply the Greeks with Italian material captured in Libya.

When the British landed in Greece in March 1941 they were dismayed to find that many divisions existed in name only. One division of recently assembled troops had a strength of just six battalions, and its transport was limited to the commander’s motor car and five trucks.

The Greek Air Ministry was responsible for the air services maintained by the Greek Army and Navy. There was no independent Air Force as such. The Army air service was small with just 250 officers and 3,000 men. Many of the pilots had undergone their training in England, and although outnumbered first by the Italians and then by the Germans, the air service put up a stubborn resistance in the campaigns of 1940-41.

In 1940 the combined strength of the Army and Navy air services was as follows:

When the Germans invaded in April 1941 only 41 combat aircraft were still operational.

The Army air service was organized in three flying regiments each of two squadrons, based on rather primitive airfields in Athens, Candia, Drama, Joannina, Larissa, Salonica, Tanagra and Thebes.
Its primary role was to provide air support for ground operations, but by January 1941 casualties and lack of spares had practically grounded it, and so the Greek command had to appeal to the RAF to switch its emphasis from bombing Italian lines of communication to providing air support to ground forces.

The executive commander of the Navy was the Chief of the Admiralty, Admiral A. Sakellariou.
Under him were 6,300 regular naval officers and men and 11,000 reservists and the following vessels:

The Greek Navy suffered its first loss on 15 August 1940, before the opening of hostilities, when the minelaying cruiser Helli was alleged to have been sunk by an Italian submarine.
On the outbreak of the war two months later the Navy’s first task was to ensure the safe passage of thousands of Army reservists recalled to the colors from the numerous Greek isles. At the same time the Navy patrolled the coast of Albania and provided artillery support.

German entry into the Greco-Italian war was heralded by aerial attacks which destroyed a number of Greek warships. On 21 April 1941 the Greek government decided to evacuate the mainland, and the port of Salamis was blown up as the last ship carrying Allied troops left.
29 warships and auxiliary vessels were sunk – a very high proportion of the prewar Navy.