With production totaling 18,482 units, the B-24 Liberator was the most numerous U.S. combat type of WW2. The B-24 served in the thick of the fighting on every front and in a variety of roles, including bombing, maritime reconnaissance, anti-submarine warfare and transport. But the type’s major contribution was as a bomber, especially in the Pacific. In three years of operations B-24s dropped some 635,000 tons of bombs and downed 4,189 enemy aircraft. Although crews preferred the B-17 Fortress because it was less vulnerable, the Liberator proved to be an excellent and versatile combat aircraft. Apart from Consolidated, several other companies built Liberators. A total of 1,694 were delivered directly to the Royal Air Force for service with Coastal and Bomber Commands.

The preliminary studies which gave rise to the B-24 began early in 1939, when the Consolidated Aircraft Corporation was asked by the U.S. Army Air Corps for a new heavy bomber. What was required was a more modern aircraft with better speed, range and altitude performance than the Boeing B-17 Fortress, which was already in production.

Head designer Isaac M. Laddon settled on a high-wing monoplane with twin fins and rudders. The wing was certainly the most original and advanced feature of the Laddon design. Consolidated had recently begun to incorporate Davis laminar-flow contours into its designs, and did not hesitate to apply these advances to the new bomber. The Liberator’s high-aspect-ratio wing conferred an impressive payload, climb and range performance.

A contract signed on March 30, 1939, called for a full-size model and a prototype; the latter first took to the air on December 29 of that year. The new bomber had a deep fuselage and a large bomb bay with sliding doors. The under­carriage was unusual for the time: a tricycle arrangement in which the main gear retracted into the wing. The type was originally powered by four Pratt & Whitney R-1830-33 engines with two-­stage mechanical superchargers, subsequently replaced by exhaust-driven turbo-superchargers.

Seven pre-production examples were built, followed in 1940 by a first order for 36 aircraft. Only nine of these were built, the rest being produced as B-24Cs. The B-24C had turbo-super­charged Pratt&Whitney R-1830s, which necessitated structural modifications to the engine nacelles. The armament was also increased. The first significant version, however, was the B-24D, for which large orders were received in 1940. Further orders brought total production of this variant up to 2,738 units. Such was the demand for the B-24 that the original production facilities had to be expanded.

Consolidated built B-24s at San Diego and then added a second assembly line at Fort Worth, Texas. Beginning with the B-24D, Douglas, Ford and North American also built Liberators.
Beginning in April 1942, the B-24D was the first Liberator to go into combat. Most of the Liberator’s early combat career centered in the Middle East and Pacific theaters. The next version was the B-24E, which bad different engines and propellers. Then came the B-24G. Beginning with the 26th B-24G, a substantial modification was introduced. A mechanically operated nose turret was installed, thus providing extra defense against frontal attack, to which the B-24 had been particularly vulnerable. This arrangement was standard in all subsequent versions.

To help them form up into their vital formations the 8th AAF bombardement groups used gaudilly painted lead-ships, visible from a distance. Here the war-weary B-24 H lead-ship of the 458th BG orbits the Norfolk coast as the whole group climbs out of Horsham St Faith, Norwich (England), and formus up behind it. 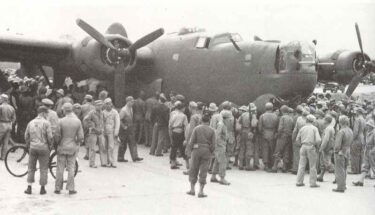 Army Air Force men around one of the first B-24 Liberator to arrive in Great Britain. 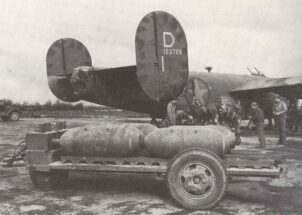 B-24 Liberator train the Ploesti raid in low-level flight over the North African desert. 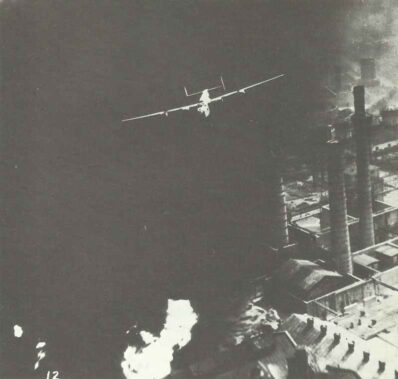 B-24 Liberator at roof height over the Ploesti Oilfields. 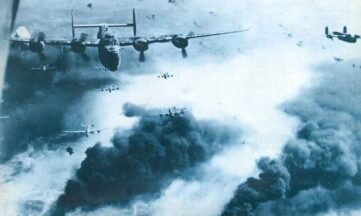 B-24 Liberator above the Condordia Vega oil refinery near Ploesti. 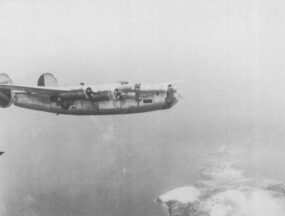 B-24J Liberator on a mission over the Pacific.

B-24 Liberators of the Far East Air Force command taxy out at the start of a mission.

A B-24 Liberator pulls away from a burning oil refinery at Balikpapan. 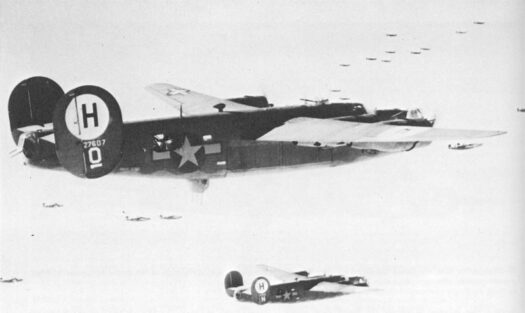 Against a sky full of friends, B-24H Liberators are flying in a 24-ship formation en route for Germany on this day.

An entire air armada of B-17 Flying Fortress and B-24 Liberator bombers, which were making emergency landings during the war in Switzerland. In total, there are 186 four-engined US bombers that are given free by Switzerland only after the surrender of Japan.

Among the more important experimental variants and conversions of the B-24 were the photographic-reconnaissance F-7; the C-87 transport; the AT­22, a flying classroom for navigator training; and the C-1O9 transport/tanker. The Liberator XB-41, a B-24D modified in 1942 for service as a heavy bomber escort, never got beyond the prototype stage. It carried fourteen 12.7 mm machine guns.

Specifications for Consolidated B-24 D Liberator