The operational analysis carried out by German war planners during the 1920s indicated that in future conflicts a 105-mm (4.13-in) projectile would be far more effective than the 75-mm (2.95-in) equivalent for no great cost in delivery system weight, that is the artillery piece involved. Thus, they plumped for a new 105-mm (4.13-in) howitzer, and design work started as early as 1928-1929. Rheinmetall was the project leader, and the result of its efforts was ready for service in 1935.

The new weapon was the 105-mm leFH 18, a conventional and sound howitzer with a useful projectile weight and adequate range. If there was a fault with the leFH 18 it was that it was so soundly constructed that it was rather heavy, but as motor traction was expected to provide the bulk of the pulling power that was no great disadvantage, at least in theory.

The leFH 18 became a valuable export item, and numbers were sold to Spain, Hungary, Portugal and some South American nations; large numbers also came off the production lines to equip the expanding German forces.

As ever the gunners were soon asking for more range, and as a result an increased propellant charge was introduced for the leFH 18. This dictated the introduction of a muzzle brake which meant a change of designation to 105-mm leFH 18(M), the suffix denoting ‘Mündungbremse’ (muzzle brake). The introduction of this muzzle attachment meant that a special sabot sub-calibre 88-mm (3.46-in) projectile could not be fired until a new revised design was introduced slightly later.

Thus, the leFH 18 series went to war and proved itself efficient enough until the winter campaign in Russia took its toll in 1941-1942. During the thaws involved in that campaign large numbers of 105-mm (4.13-in) howitzers were lost because the weights involved were too great for the available towing vehicles to drag weapons clear of the all-prevailing mud. Thus the overweight howitzers showed their disadvantage with a vengeance, and a hurried search for some form of alternative carriage then began.

The result was an unsatisfactory improvisation, The carriage of the 7.5-cm Pak 40 anti-tank gun was simply taken as the new mount for the leFH 18(M) gun, its associated cradle and the large shield. The result was slightly lighter than the original (but not by very much), and the improvised arrangement gave constant problems that were never properly eradicated. It was intended that the new howitzer/carriage combination, designated 105-mm leFH 18/40, would become the standard field howitzer for all the German army, but this never happened and in 1945 even the old FH 16 was still in the line. 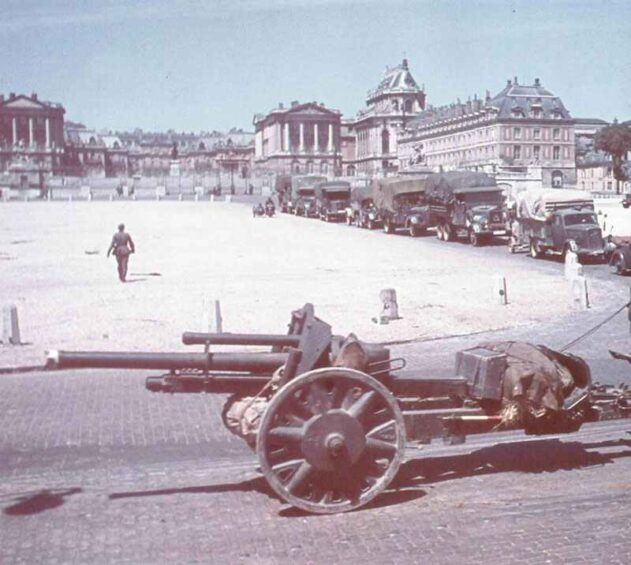 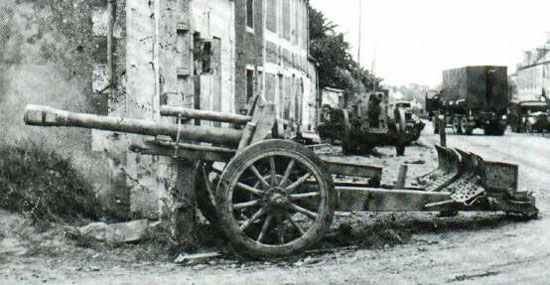 Abandoned 105-mm leFH 18(M) howitzer in Normandy in June 1944. Note the obvious bulk and weight of the trail legs and spades that combined to make this howitzer too heavy for the mobile field role.