One of the few worthwhile outcomes from the T-34M controversy was the design of a new, larger cast turret which gave the gun crew more room. Use of this new hexagonal turret began at Nizhni Tagil early in 1942 as the T-34 Model 1943, and it first appeared against the Finns in Karelia in April 1942.

Production of the Model 1942 and Model 1943 took place simultaneously, with the other two facilities continuing to manufacture the T-34 Model 1942 until later in 1942. There were a number of production variations between the products of the different factories. Both the T-34 Model 1942 and T-34 Model 1943 had a distinctly rougher appearance than the well­crafted T-34 Model 1940, but the apparent crudity of many of the welds and joints did not detract at any point from the integrity of the armor. Indeed, an inspection of a T-34 Model 1942 provided to the British School of Tank Technology in 1943 found the armour quality to be equal or superior to British armor. Where fine machining was required for moving parts, it was provided.

In 1942, Russia faced a severe shortage of rubber which forced STZ to begin producing its T-34s with all-metal road wheels, and the other plants followed suit. Eventually, rubber-rimmed wheels were used in the first and fifth positions because with all-metal wheels in these positions, harmonic vibrations were set up when the tank was moving at high-speed, which loosened parts and caused other damage.
In the autumn of 1942, STZ’s output began to diminish as a result of the heavy fighting enveloping Stalingrad, but in August, production had been extended to Tankograd where T-34 (76-mm gun) production continued until April 1944. The Ural Heavy machine Tool Factory (UZTM) in Sverdlovsk began to provide T-34 components in 1942, and began full assembly of T-34s later in the year.

Further improvements were incorporated into the T-34 later in the year. Additional fuel could be carried by using the new exterior fuel panniers at the rear of the vehicle. At the beginning of 1943 these were changed to cylindrical drums, with most tanks being adapted to carry three. Various new tracks were developed for use in snow and mud, and to improve traction.

While Russian tanks could not be equalled in terms of firepower, armor or mobility, their performance on the battlefield was often sadly lacking. German tank troops found that Russian tank units seldom took advantage of terrain, acted in an uncoordinated fashion, and tended to attack in rigid geometric formations. Some of these problems can undoubtedly be traced to inadequate training, but poor ergonomic design of the tanks was also to blame.
In 1942, it was not unusual for tank crews to receive as little as 72 hours of classroom training apart from basic training. Unit exercises were often perfunctory, but equally damaging was the archaic layout of Russian tank turrets. German turrets had three-man crews: gunner, loader and commander. The function of the commander was to observe the terrain, direct his crew and co-ordinate the deployment of his tank with that of his unit. In contrast, the Russian turret had only two men, a gunner and a tank commander. The tank commander not only had the same duties as his German counterpart, but also had to load the main gun and the coaxial machine-gun which could be very distracting in the heat of battle. 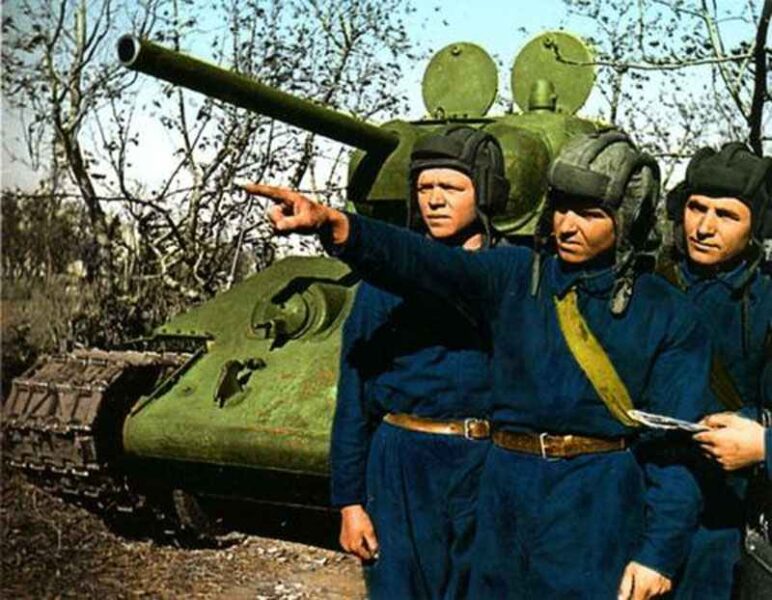 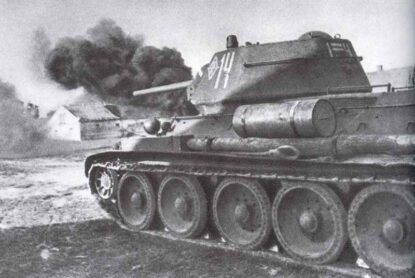 The most used Russian tank, the T-34 in street fighting. Remarkably the equipment with a tree trunk, to help by repairing the tracks. 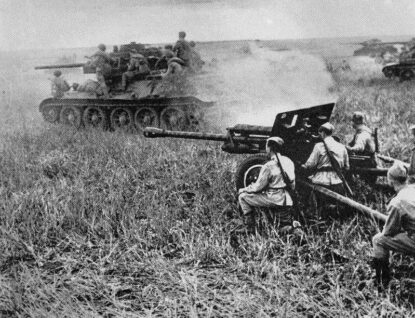 Tank battle of Kursk in July 1943: Russian T-34 tanks and fieldguns in action. 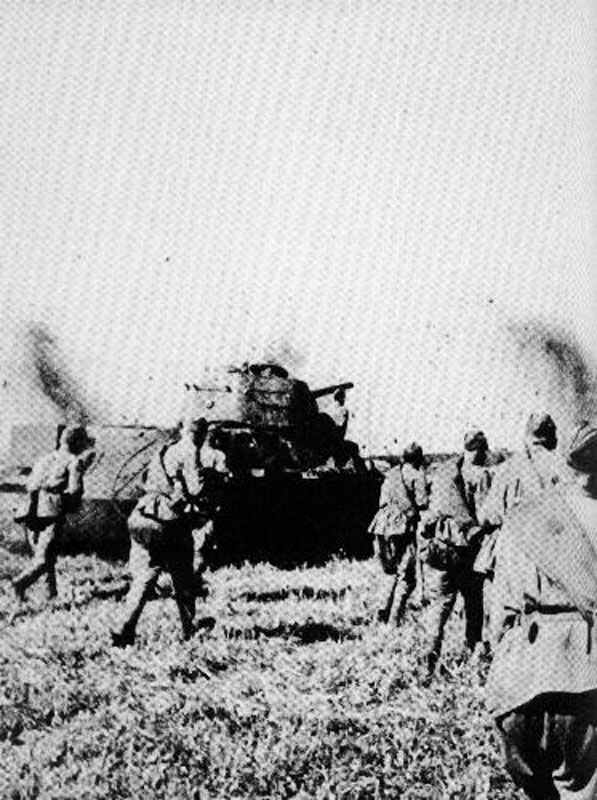 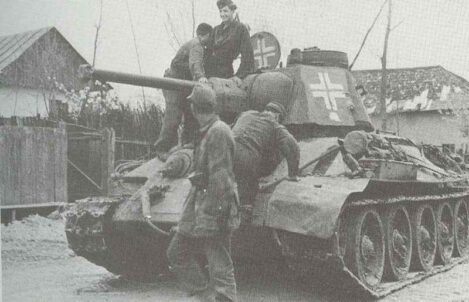 A captured Model 1943 in use with the German Army. This Tank was re-equiped with a German commander’s cupola. 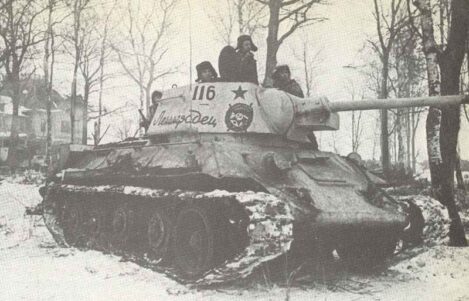 A Model 1943 tank named ‘Leningradyets’ of the 30th Guards Tank Brigade advances into Krasnoye Selo, southwest of Leningrad, in January 1944. 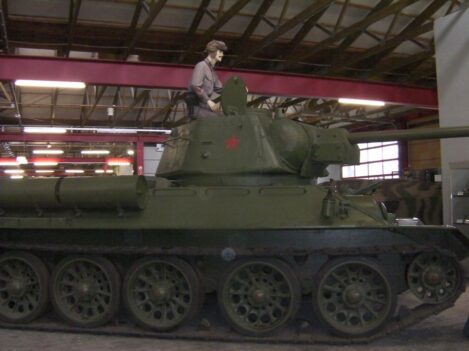 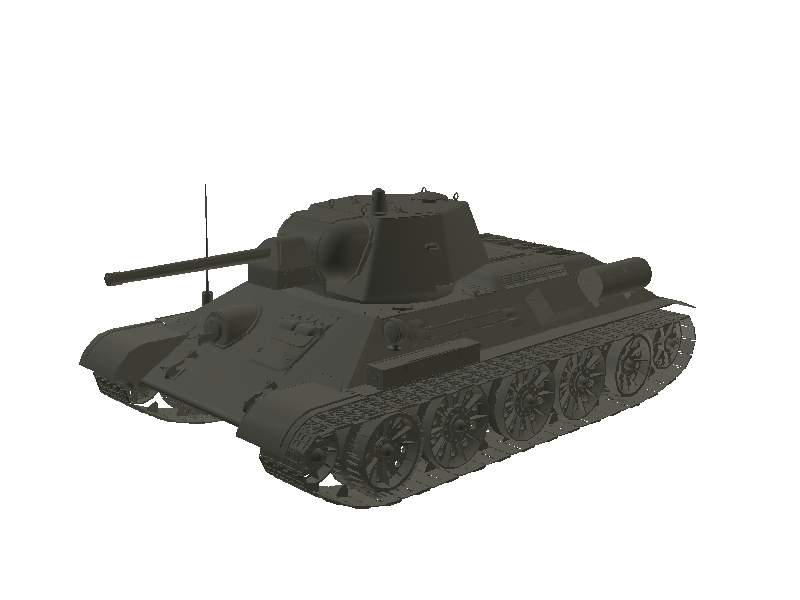 Furthermore, the turrets of the T-34 and KV-1 tank were not fitted with a turret basket. The crew sat on stools suspended from the turret ring. Under their feet were ammunition bins covered by a neoprene mat. During combat, the floor became a mess of open bins and matting as the crew began removing ammunition and this degraded performance.

Even if not distracted by his loading duties, the Russian tank commander did not have a 360° vision cupola like his German counterpart. On the T-34 and KV he had only a single traversal periscope with a very narrow field of vision, and a view-slit near his left shoulder. Many German tank troops liked to fight with their heads out of the turret to better see the terrain, but this was impossible in the KV because of the location of the roof hatch, and difficult in the case of the T-34 as the large, single-piece hatch opened forward, blocking the commander’s field of view.

The relative shortage of radios in Russian tanks until 1943 also hampered co-ordination of unit operations. Communications between tanks in a platoon had to be conducted by flag which was slow and unreliable. More often, the platoon commander merely instructed the other two tanks to follow his example.

Russian tank designers had appreciated these faults as is evident in the KV-3 and T-34M designs, but, given the pressures to limit major design innovations for the sake of maintaining maximum production, in order to compensate the staggering battlefield attrition, such improvements were not adopted until the middle of the war.
In the case of the T-34, late in 1942, an in interim step was taken by redesigning the roof of the T-34 Model 1943 to incorporate a 360° vision cupola and to equip more tanks with radios.

Service statistics of all T-34 variants with 76.2-mm-gun: