German Armored Cruisers Scharnhorst class from World War One, and the battle of Coronel in 1914.
History, development, service, specifications, pictures and 3d model.

The armored cruiser SMS Scharnhorst was the flagship of Graf Spees East Asia squadron with the base in Tsingtao. In consideration of the British naval rule, the meteoric rise of the sea hero von Spee and his squadron could only end in the same way. But before he could be cornered, he gave the British Royal Navy the first major defeat at sea in two and a half centuries.

According to the Naval Law of 1900 and subsequent amendments, the strength of the German Imperial Navy was fixed at 38 battleships, 20 armored cruisers, 38 small cruisers and 144 torpedo boats. But the program was confused by the appearance of the British Dreadnought.
At the same time it was recognized that there was at least a need for a squadron of efficient armored cruisers for overseas service.

As with the light cruisers, the German designs of the large cruisers were constantly developed further. The main focus was on single ships or a pair of ships.
In 1900 the first pair of SMS Fürst Bismarck and SMS Prinz Heinrich of the ‘Bismarck’ class was launched. Although both ships had identical dimensions, they differed in water displacement as they had two different armor standards. Each of the ships had two of the older battleship guns with a caliber of 240 mm (9.45 inch).

These ships were followed by two of the ‘Prinz Adalbert’ class with the names SMS Prinz Adalbert and SMS Friedrich Karl. Both were also of the same size, but adopted the lighter armor protection scheme and had more powerful engines and doubled the number of main guns with the introduction of the excellent 210 mm (8.27 inch) guns. Nevertheless, they barely reached a top speed of 20 knots.

The two ‘Roon’ class units, SMS Roon and SMS Yorck, were launched between 1903 and 1904 and slightly enlarged the previous design to increase engine power by eight percent. This predictably increased their speed by less than a knot.
An improved arrangement of their 150 mm (5.91 inch) secondary guns, five on each side and two on each level, allowed the armor protection to be better distributed. The result of the larger number of boilers was an increase in funnels from three to four.
Although their armament was excellent, the Roon class armored cruisers were inferior to their British counterparts in speed and slightly in armored protection.

Until 1914 most German armored cruisers belonged to the reserve fleet or were used as training ships. Most of them were not particularly successful ships with poor design, weak protection and a large, treacherous silhouette.
The 9,350 t armored cruisers of the ‘Roon’ class were particularly unsuccessful. SMS Yorck sank after a mine hit in November 1914, while SMS Roon was converted into an unarmed residential ship in 1916.

All this was corrected by the two armored cruisers SMS Scharnhorst and SMS Gneisenau of the ‘Scharnhorst’ class of 1906. Like all German armored cruisers, except the Armoured Cruiser Blücher, they had a short citadel with two decks. The two ships reached 22.5 knots due to a 30 percent increase in performance.

Instead of additional armament the armor protection was improved, whereby the side belt became slightly thicker at the expense of the armored deck. The ‘Scharnhorst’ class had a good subdivision of the bulkheads and could therefore withstand considerable battle damage. The design was promising, with both ships taking huge numbers of heavy hits before they could be sunk at the Falklands, unlike other armored cruisers.

The two armored cruisers SMS Scharnhorst and SMS Gneisenau received fire control units in 1912 and by the outbreak of the war their crews had served in East Asia for so long that they had reached a high level of training, which was the main reason for their simple victory in the Battle of Coronel on 1 November 1914.
However, they had no chance against the British Invincible class battle cruisers at the Falklands, completed at the same time, as these ships could dictate the range with their 305 mm (12 inch) guns at any time with their superior speed and greater fire range. 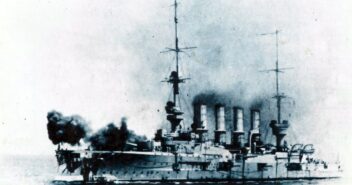 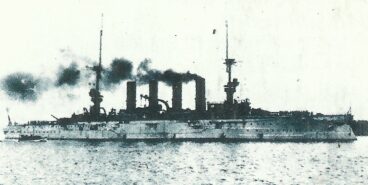 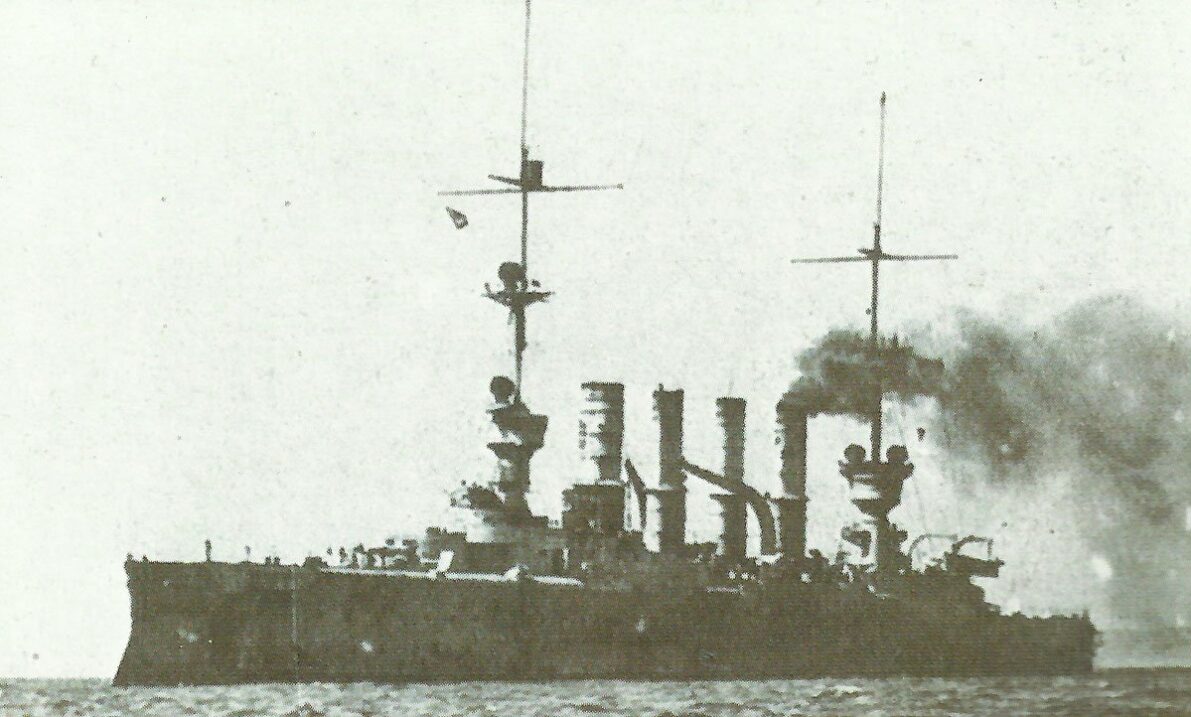 In the first years of the twentieth century, German imperial trade interests in China were controlled from the enclave of Tsingtao. The city also served as a base for river gunboats and the mighty East Asian squadron.
Under the command of Vice Admiral Graf von Spee, the squadron was a highly efficient unit consisting of the two 11,400-ton armored cruisers SMS Scharnhorst and SMS Gneisenau, as well as the light cruisers SMS Emden, Leizig and Nürnberg, which averaged 3,500 tons. All ships were completed between 1906 and 1909.

The Germans were aware of the fact that in the event of a general war with the colonial powers and probably Japan, the city and port of Tsingtao would be indefensible. It was therefore not surprising that Admiral Spee’s ships were already scattered at the outbreak of war in August 1914.
His two large armored cruisers were located in Ponape in the Caroline Islands and their position was unknown to the Allies. In a short time the small cruiser Nuernberg arrived there from the west coast of the USA. Usable merchant ships were requisitioned and armed, which were to serve the squadron as auxiliary ships.
The last ship in Tsingtao was the Emden, which set sail with four coal ships on August 3, 1914. The Leipzig was recalled from the Mexican coast.

Although there was great concern among the Allies about the presence of the German squadron, which could threaten numerous troop convoys, von Spee kept his activities at a low level. He ran to Pagan Island, where he was met by the Emden.
It was clear to him that offensive activities in the Pacific would certainly lead to combat damage and later the destruction of his squadron, as he lacked a suitable base. Therefore, he sent the Emden to raid the Gulf of Bengal and set off on the long journey across the Pacific in the opposite direction at low speed.

Since there were hardly any enemy warships in the area, no obstacles were placed in the way of his journey. On his way along the Chilean coast to Cape Horn, he planned to paralyze Allied trade in the region.
On 27 October 1914, his squadron off the South American coast was strengthened by the light cruiser SMS Dresden, which had been pushed out of the South Atlantic by an increasing presence of British naval forces.

On 31 October von Spee had sent the light cruiser Leipzig to the vicinity of the small harbor of Coronel, where it found the British cruiser HMS Glasgow. As the opportunity arose to destroy a British warship, the German admiral ran south with his squadron. In the afternoon of the following day, the German squadron stood about 50 miles (80 kilometers) northwest of the port.

His two armored cruisers ran in one line ahead, closely followed by Leipzig. A little further east was Dresden, while Nuremberg stood further north out of sight.

This somewhat shredded battle line ran with 14 knots through the sea covered with waves of a south storm and about 16:30 o’clock the smoke of two warships in the southwest was detected.
These approaching ships were recognized as British and, not knowing their intentions, ran from Spee to the coast to cut them off from neutral waters.

A degree of concentration of forces was desirable, so both sides remained at a distance. In particular, von Spee had no idea of the number of enemy ships behind the Glasgow.

Until 6 p.m. the Germans ran parallel from a ‘Drake’ class armored cruiser with four funnels and a ‘Country’ class with three funnels. These were HMS Good Hope and Monmouth. The former carried the flag of Vice Admiral Sir Christopher Cradock, who had come from the South Atlantic with a scratched squadron and had the ambitious intention to find and stop Admiral von Spee.

The German gunners watched their hard to spot targets in the west before the setting sun, while they themselves were well lit. So the German ships maneuvered to stay out of range, while the British did not want to take advantage of their temporary superiority.

Sunset was 19 o’clock and waiting for the reversal of the advantage of sight had approached from Spee at c.12,000 yards (11.000 meters). After the sun had submerged, the British ships were clearly visible against the twilight, while the German ships quickly disappeared into the darkness approaching from the east.

From the beginning, the untrained British salvos were pathetic and in addition there was the visual advantage for von Spee. At 19:30 the fighting distance had been reduced to c.6,500 yards (6,000 meters) and the targeted, fast German fire suffocated any resistance.
For the insertion of only four hits, Gneisenau forced the British Manmouth off the line, with the fires inside visible through the holes in their glowing steel plates. Gneisenau then switched target to Glasgow, which was difficult to hit and fleeing quickly, while Nuremberg was commissioned to find and sink the heavily damaged armored cruiser Manmouth.

The Scharnhorst had meanwhile suffered only two hits, but scored an estimated 37 on the Good Hope. The British armored cruiser, although with only few guns still ready for action, still answered courageously until suddenly a magazine explosion made the ship disappear. Von Spee described this as ‘big fireworks’.

The Glasgow and the AMC Otranto were able to escape to the west and the completeness of the German victory later became apparent when Nuremberg reported that it had also sunk the Monmouth. When the German cruiser had found the British armored cruiser at 9 p.m. in the moonlight, it was lying in the sea with too much list to be able to use the majority of its remaining guns.
As with Good Hope, there were no survivors on the Monmouth, as the sea was too violent to allow lifeboats to lower.

Here to Part II: Scharnhorst at the Battle of the Falklands.