The first fifty of these ships were authorized as part of the US Navy’s 1916 program, which was designed to prepare for inevitable involvement in World War One. The main design criterion was to keep pace with the planned new battlecruisers and cruisers, which necessitated a speed of 35 knots, which could only be achieved by a fifty percent increase in power, which meant more and heavier machinery in a relatively small hull.

The ships were built to two slightly different detailed designs, one prepared by Bethlehem Steel for its Fore River and Union Iron Works shipyards, the other by Bath Iron Works for the remainder, this latter being dubbed, albeit unofficially, as the ‘Liberty’ type.

Only a few were completed in time to take part in World War One, but the type provided the bulk of the US Navy’s destroyer force throughout the 1920s and 1930s, although twenty-five were disposed of, mainly due to mechanical shortcomings. Fourteen were converted to fast mine layers in 1920, all their torpedo tubes being removed to provide space for mines. Even so, a large number remained in 1939, and although elderly they still played a full part in the Second World War.

Twenty-seven Wickes class destroyers were handed over to Royal Navy and RCN in 1940 (plus 3 of the early Caldwell class and 20 of the final Clemson class) in order to provide those two navies with desperately needed escorts. A number were lost in the war and the survivors were scrapped 1946-47.

Pictures of battleships of Flush-decker destroyers 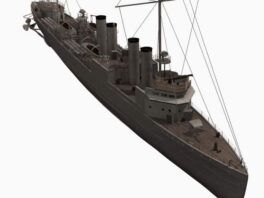 3d model of flush-decker HMS Campbeltown of Wickes class, handed over to Royal Navy in 1940.