British Battlecruiser class Lion and Princess Royal in action at the Battle of the Dogger Bank.
History, development, service, specifications and pictures.

Embodying all the strengths and weaknesses of Fisher’s battlecruiser concept, Lion was every inch a thoroughbred. Fast and powerful, but vulnerable to fire from heavy vessels, the sight of Lion at the head of Beatty’s battlecruiser fleet was a stirring sight which disguised the basic frailty of high speed, lightly armored vessels.

The magnificent HMS Lon was the warhorse of David Beatty, the impetuously courageous genius commanding the Grand Fleet’s Battle­-Cruiser Squadron. Like all of her kind she car­ried a punch that could crack a battleship, yet was perilously vulnerable to any plunging re­turn fire. The deficiencies of such battle­cruisers were recognized and accepted as the type could not be used effectively by the cau­tious, and caution was one word that Beatty never learned.

In January 1915 signal traffic warned of a new German operation: Hipper, with a light screen, but backed by the might of the German High Seas Fleet, was bound for the Dogger Bank area with a vague brief to deal with any British light forces that may have been out.
Beatty sailed with five battle-cruisers and Goodenough’s 1st Light Cruiser Squadron, rendezvousing with Tyrwhitt’s Harwich Force in the gray dawn south-east of the bank. Virtually at that instant, the latter ran into Hipper’s screen and, as day broke, the Lion led the British line in a tail chase of the already fleeing enemy, whose force was slowed somewhat by the hybrid cruiser/battle-cruiser Blücher.

By full daylight, in clear conditions, the Lion had closed to within 18,300 meters (20,000 yards) of the Blücher (at the rear of Hipper’s line) and opened fire with her forward 343-mm (13.5-inch) guns. As the range dropped to 16,000 m (17,500 yards), Beatty signalled each ship to engage its opposite number but, as Hipper had only four ships, this was ambiguous and resulted in SMS Derfflinger, ahead of the Blücher, not being engaged at all. Undisturbed, she made good practice, and undoubtedly contributed to the severe punishment soon sustained by the Lion. Her fuel contaminated by holed tanks and pow­er generators failing, the Lion slowed, signall­ing the remainder to close the enemy. This was followed by an order to turn eight points to avoid a totally nonexistent submarine. Beatty, losing touch as the battle moved away, signal­led ‘Course NE’, followed too quickly by ‘En­gage the enemy’s rear’. The two signals were read in conjunction, and taken to mean that the force should engage the hapless Blücher which, shattered and ablaze, was falling well behind the remainder. With no power for sig­nal projectors and at a range where flags could no longer be interpreted, Beatty lost control of the battle. In vain did he shift his flag, for Hip­per’s three survivors were beyond reach and the Blücher fought to the very end.

Though the enemy had lost a useful ship and SMS Seydlitz had narrowly missed blowing up, an annihilating victory had been lost through poor gunnery, poor initiative and poor signall­ing. As a fuming Fisher wrote, ‘What excuse have we to offer?’
The Lion, hit by an estimated 16 heavy shells, languished under repair for four months.

On return to service, she was flagship of Beatty’s reorganized Battle-Cruiser Fleet of three homogeneous squadrons. A quiet year followed, enlivened only by a couple of sea­plane raids on the enemy coast and yet another failure to apprehend a hit-and-run attack on Lowestoft and Yarmouth in April 1916.

The battle is covered elsewhere but, during the initial ‘run to the south’, a shell from SMS Lützow removed the better part of the roof of ‘Q’ turret, the resultant explosion and fire in which would have destroyed the ship except for the courageous action of a mortally­ wounded Royal Marine officer who promptly flooded the magazine, earning a Victoria Cross. Within 30 minutes Beatty was to see two more of his ships blow up from the same cause, prompting the famous remark to his flag cap­tain that ‘there seems to be something wrong with our bloody ships today’.

The Lion and her consorts sighted Admiral Scheer’s High Seas Fleet, closed it, reported and then drew it to the north onto Jellicoe’s guns, finally forcing round the head of the Ger­man line to gain time. After the indecisive bat­tle fleet encounter, in the failing light of late dusk, a frustrated Beatty was still in contact with Hipper, unable to goad Jellicoe into further major contact before darkness.

The anti-climax of the end of the battle of Jutland was painful for Beatty after his all-out efforts. The Lion had sustained 12 heavy hits, HMS Tiger 10 and HMS Princess Royal six and, on the passage back to Rosyth, the flagship committed 99 dead to the deep. She reported ready for action within two days and was fully repaired within seven weeks.

Beatty’s association with the ship ended ear­ly in 1917 on his appointment as Commander­-in-Chief of the Grand Fleet. The Lion took the flag of Vice Admiral Pakenham but, although at sea as much as ever, was not again to see action.

A victim of the Washington Treaty condi­tions, she was scrapped at Jarrow in 1924. 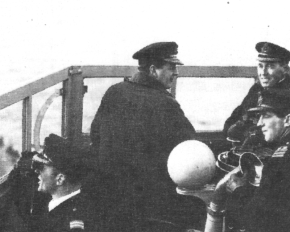 Admiral Sir David Beatty on ‘Lion’ at sea prior to the battle of Jutland. 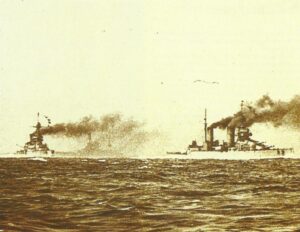 ‘Lion’ and ‘Tiger’ exercise with an ‘R’-class battleship. 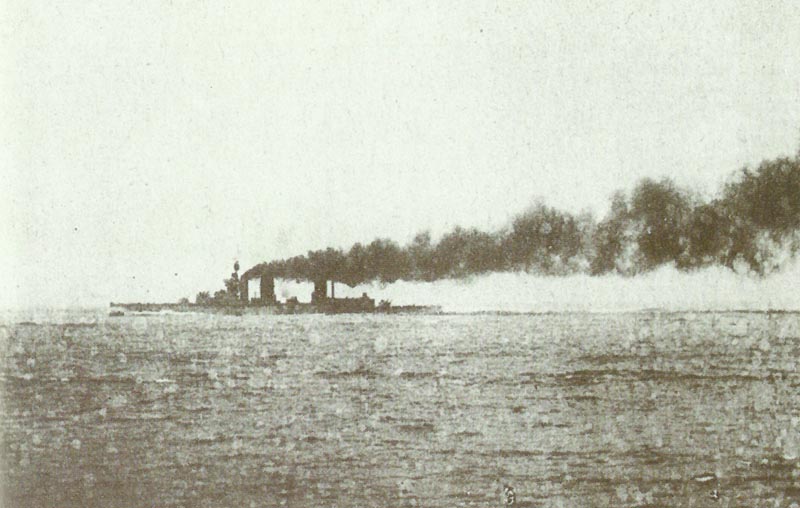 ‘Lion’ is steaming at full speed during the battle of Jutland before receiving the near-disastrous hit on ‘Q’ turret. 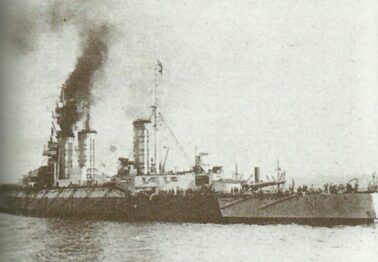 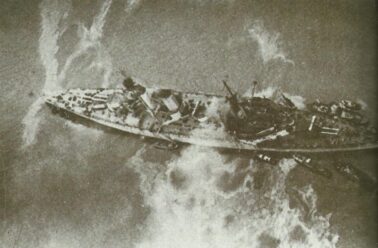