Battlecruisers Gneisenau and Scharnhorst in World War II and in the F2P game World of Warships.
History, construction, service, specifications and pictures.

When the pocket-battleships were built for the German Kriegsmarine, a naval arms race began, as the French responded to the threat of German surface trade destroyers with the larger, faster and stronger battlecruisers of the Dunkerque class.

History of the battlecruisers of the Scharnhorst class

Therefore, the planned fourth and fifth pocket-battleship of the Deutschland class were cancelled and a new design was developed, which in turn was even bigger, faster and more heavily armed to outmatch the French again. The result was the battlecruiser Scharnhorst, which was put into service in 1939, and the sister ship Gneisenau, which, although only as the second one was laid down, could already be put into service in May 1938.

The two ships were 160.5 ft (48.9 meters) longer than those of the Deutschland class and had about 22,700 tons more displacement. They had a new armor design, which was responsible for about 40 percent of the ships’ weight. This design reinforced the upper deck and sides, and a lower armored deck protected the vital parts of the ships.

Diesel drives were considered, but the power requirement was so high that a superheat high-pressure steam system was adopted instead. This was very powerful and took up less space, but was difficult to maintain.
When new, the ships had a vertical stem, but this made the ships very wet in the front at sea. This was replaced with a raked ‘Atlantic bow’ between 1938 and 1939. Nevertheless, the use of the front main turret was always limited.

The caliber of the main armament was the source of much debate, with some officers wishing to be armed with 14-inch (356-mm) guns, while others claimed that the higher rate of fire of the smaller 11-inch (280-mm) guns would more than compensate for this obvious drawback.
It was also at this time that the German-British Fleet Treaty was negotiated and it was feared in Germany that arming with 14-inch (356-mm) guns would upset the British. In addition, the 14-inch (356-mm) guns were not available before 1940, while four 14-inch (280-mm) triple turrets were already under construction from the cancelled, additional pocket-battleships.
So two more of the triple turrets were ordered and first of all nine 14-inch (280-mm) guns each were used and the plans were to replace them with a larger caliber (6 x 15-inch/380 mm) after 1940.

The two battlecruisers were large and handy ships, especially after the Atlantic bow had been added. Their size and appearance hid at least the weakness of their main armament, which was only of the same caliber as that of large cruisers. Therefore, even the older British battleships were clearly superior to them in terms of firepower and so the ships of the Scharnhorst class had to retreat openly when they spotted one of them. 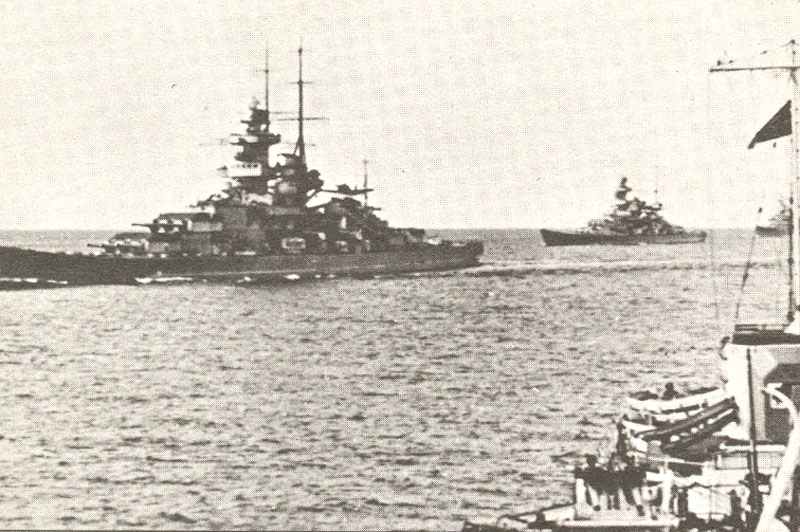 The battlecruisers Gneisenau and Scharnhorst in 1939 during a fleet show. 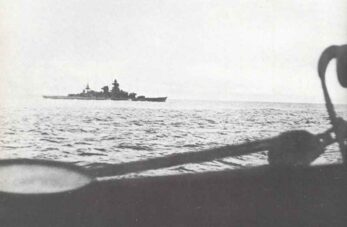 German battlecruiser Scharnhorst pictured from her sister ship Gneisenau during the Atlantic operation. 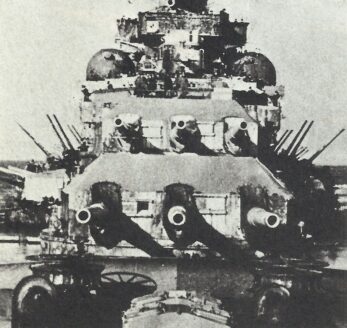 The forecastle of the Scharnhost with the 28 cm guns of the turrets ‘Anton’ and ‘Bruno’. 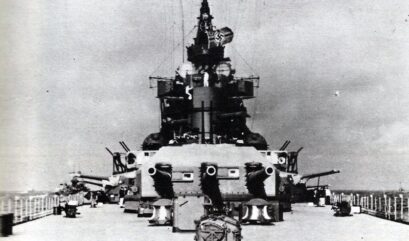 The stern of the Scharnhorst. 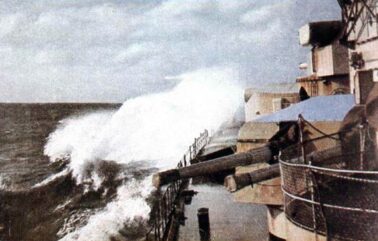 The secondary artillery of the Scharnhorst when sailing in heavy seas. 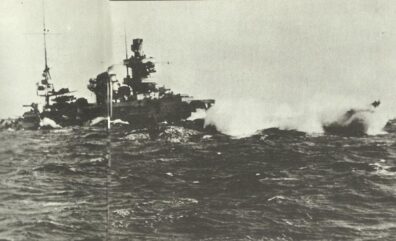 Battlecruiser ‘Scharnhorst’ in heavy seas in the Atlantic. 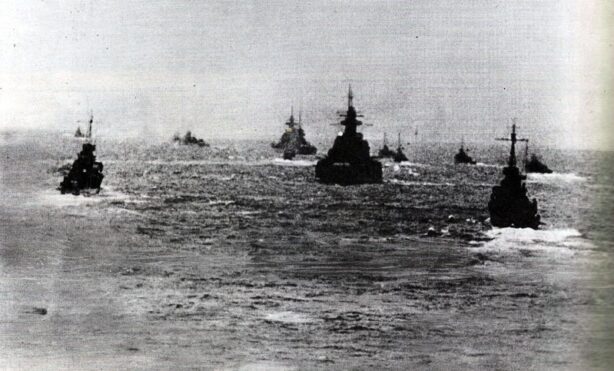 The German squadron at the channel breakthrough. 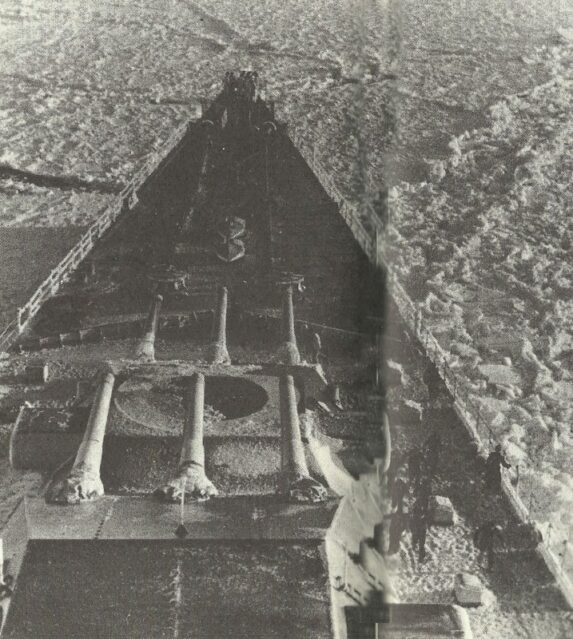 Scharnhorst in the pack ice of Norwegian waters.

The two battlecruisers basically operated as a pair together. The first operation took place in November 1939, when they broke out into the North Atlantic where they sank the British armed auxiliary cruiser Rawalpindi.

In April 1940 they were involved in the Operation Weser Crossing, where they encountered the British battle cruiser Renown, which damaged Gneisenau before the German ships could use their superior speed to escape.

In June, they sank the British aircraft carrier Glorious off the coast of Norway, together with its two escort destroyers Acasta and Ardent. However, Scharnhorst was hit by a torpedo of the destroyers, which caused considerable water ingress. Later on, Gneisenau was also hit by a torpedo of the British submarine Clyde and so both ships spent the next months doing repairs.

In early 1941, the two ships again had a successful Atlantic operation, sinking 22 merchant ships with a combined 115,000 GRT before they entered Brest. There they were under constant attack by Royal Air Force bombers and finally it was decided that they should break through the Channel to reach Germany. In the meantime, the Heavy cruiser Prinz Eugen was also in Brest after the failed Operation Rhine Exercise, where the Battleship Bismarck was sunk.

This hussar coup was carried out in February 1942 and all three capital ships reached their ports of destination, although both battlecruisers ran on mines and had to enter dry dock for repairs.

During these repairs, Gneisenau in Kiel was hit by an RAF bomb and her entire fore ship was totally destroyed. She was to be restored with a new, extended and thus more seaworthy bow and 15-inch (380-mm) guns, but around the turn of the year 1942-43 an angry Hitler ordered all capital ships to be scrapped. Admiral Dönitz, as successor of the subsequently resigned Admiral Raeder, was able to prevent this, but Gneisenau was never completed. After the conversion plan was finally abandoned and the fore ship was not yet replaced, the ship was run aground on March 27, 1945.

Scharnhorst, on the other hand, went to Norway in March 1943, where, together with the Battleship Tirpitz and several heavy cruisers or armored ships, she posed a strong threat to the Allied Arctic convoys.
This threat was so clear that the Allies renounced their Russian convoys over the Arctic route for almost the entire year 1943 and waited for the winter with its long Arctic nights.
Therefore, in September 1943, together with Tirpitz, there was only a short operation against the barely defended Spitsbergen.

It was not until December 22, 1943, that an operation against the resumed Allied Arctic convoys was launched. When attempting to attack the convoy JB.55B, Scharnhorst, due to insufficient reconnaissance by the Luftwaffe, ran into a pincer trap between the British cruisers Norfolk, Sheffield, Belfast, Jamaica and the destroyers Savage, Saumarez, Scorpion, Stord and the Battleship Duke of York.
Although the German battlecruiser manages to damage Norfolk, she was hit and sinks by at least thirteen 14-inch (356-mm) shells of the surprisingly appearing and radar-supported gun fire of Duke of York and eleven torpedoes. 1,803 crew members are killed in the freezing cold Arctic waters.

Status of the information: November 2020.

In the F2P game World of Warships, strangely enough, the battlecruiser Scharnhorst, with her 11-inch (280 mm) main artillery actually used in World War II, is a paid premium ship at rank VII, while the Gneisenau, never completed with 15-inch (380-mm) guns, is the regular German battleship for the same rank.
In this respect, the ships are similar, whereby a premium ship – albeit a paid one – earns more credit points and free research points, and can also be used as a training ship to raise additional ship captains. Despite the larger caliber, Gneisenau’s 15-inch (380 mm) guns, which fire even slower, consist of only six barrels, which significantly reduces the hit yield.

Nevertheless, both ships are witty ‘attack ships’, which can be steered through the sea with their high speed and good maneuverability and with a good captain with ‘vigilance’ can easily avoid most torpedoes. In addition, they have a strong secondary artillery with a maximum range of 8,000 meters and from Tier VII on, there is also the option for German battleships to train the captain with optimal ‘target selection’, which makes it much more effective.
By the way, the battlecruisers also have torpedoes with a range of 6 kilometers, which further increase the danger of the ships in close combat.

Scharnhorst’s mobility, higher rate of fire and lower main artillery caliber make it ideal for fighting destroyers as well as enemy cruisers. While against cruisers with armor-piercing shells a good effect can be achieved, against destroyers and most battleships from the same Tier VII onwards it is mainly explosive (HE) shells which should be used with their lower penetrating power and simultaneous increased fire probability.

Video of action with Scharnhorst in WoWs

In addition, here is a video of an action with the battlecruiser Scharnhorst in World of Warships:

The following consumables are used for this purpose:
In addition to the basic equipment with Damage Control Party to contain floods, fires or restore failed modules;
Repair Party to repair damage during the battle,
instead of spotting aircraft (for firing over longer distances), the fighter (to repel carrier aircraft) is preferred, since German ships are firing relatively inaccurately at long distances and by nature this ship usually runs close to the enemy anyway, whereby the normal fire range of 19.9 kilometers is completely sufficient.

For the German battleships with strong close-combat armament, such as from Bismarck (Tier VIII) to Grosser Kurfürst (Tier X), one of the two specialist captains available in the arsenal for doubles or coal is used.
On the premium ship Scharnhorst, Franz of Jutland was used, who otherwise served on the Grosser Kurfürst. On premium ships every captain of another ship can be used and at the same time be trained faster !

The two German captains Franz of Jutland and Reinhard of Jutland have two particularly strong skills: ‘Jack of all trades’, which reloads consumables faster, and ‘Vigilance’ which detects torpedoes earlier and successfully avoids them. Starting with the Bismarck, the latter capability also increases the range of the ‘Hydroacoustice Search’ module.

These two captains have the following skills in detail:
Preventive Maintenance, to limit severe damage to important modules;
Jack of All Trades, in order to be able to reuse consumables (such as repairs, damage limitation or on-board aircraft) more quickly;
Adrenaline Rush to be able to fire faster with increasing damage, especially in close combat;
Basic Firing Training increasing firing speed and hit accuracy of secondary guns and AA;
Vigilance, to be able to recognize torpedoes in time;
Manual Fire Control for Secondary Artillery to manually aim the secondary guns at a single target, which greatly increases their effectiveness; and
Advanced Firing Training to significantly improve fire range and damage effectiveness of secondary artillery and AA.

The player statistics for ships in World of Warships can be found here:
Battleships Tier VII statistics.

The specifications and features of the West Virginia 1941 in World of Warships are here:
Scharnhorst — German promo premium Tier VII battleship.