Pocket-Battleship Admiral Graf Spee and Battle of the River Plate.
History, development, service, specifications and pictures of the German armored ships of the Deutschland class (later Lützow, as well as Admiral Scheer and Admiral Graf Spee).

After World War One, the Allies had intended to limit the largest German warships to coastal armored ships. In the Treaty of Versailles, therefore, only armored ships up to a maximum type displacement of 10,000 tons and a caliber of 11 inch (280 mm) for the guns were permitted to the Germans. This corresponded in size and armament to the old pre-Dreadnought ships, which the German navy was allowed to keep for training purposes.

After the experiences with the raiders during the early months of the First World War the German navy assumed however that combat-strong warships with a large operation range were a better task for these units.
After several alternative designs, ships were constructed, which were meaningful and contemporary warships and did not violate the given contractual limitations too obviously.

The ships of the Deutschland (Germany) class had been designed practically around their propulsion systems. The German engineers had to produce a design that was precisely balanced between speed, armament, armor and endurance within the given tonnage limits.

For the first time diesel engine systems were used, which weighed not much less than turbines and resulted in a lower top speed, but required fewer personnel for operation and less space. Above all, however, diesel was much more economical in terms of fuel consumption, which improved the cruising range for a smaller ship. The eight diesel engines, which transmitted their power via two shafts, made a flexible and highly economical drive possible.
In addition, the smoke emission from the diesel systems was much lower, which meant that the ships could only be discovered late. This could actually have helped Admiral Graf Spee in front of the La Plata Estuary, as the ship could detect the smoke plumes 15 minutes before the British cruisers. This possibility was not used by the German commander to avoid the enemy and to escape. 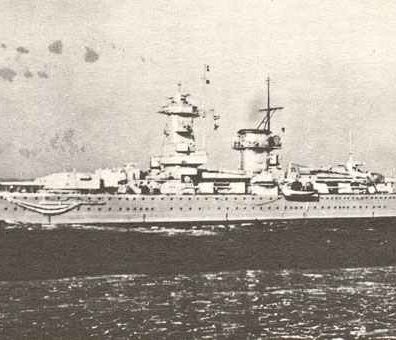 The pocket battleship Admiral Graf Spee in ice drifts in the Baltic Sea. To escape from British patrols, the ship had left the Baltic for the South Atlantic before the outbreak of WW2. 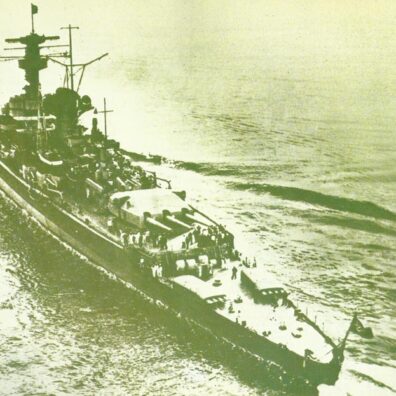 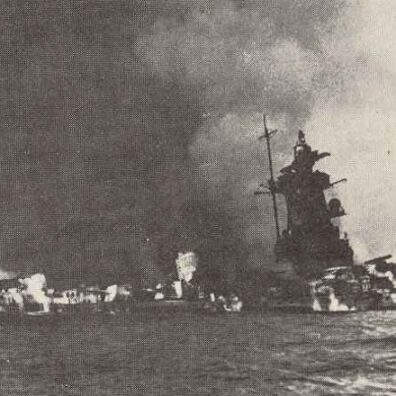 In order not to exceed the contract conditions at least too obviously, weight savings had the highest priority with the drafts. Large quantities of light metal alloys were used and the hull was welded together, saving 15 percent.
Also, the main guns were housed in two triple turrets, front and rear, which resulted in weight savings. However, only one target could be fought effectively at a time, which had a negative impact on Admiral Graf Spee‘s battle against the British cruisers Exeter, Achilles and Ajax.

However, the 5.9 inch (15 cm) guns had only splinter protection and were in single gun carriages around the funnel. The two 21 inch (533 mm) quad torpedo tube sets on the aft deck were mainly designed to sink quickly and easily merchant ships.
Additionally, there was a reconnaissance aircraft on board, which could be launched by a catapult.

All three armored ships were built and completed in different ways. Deutschland and Admiral Scheer, for example, had a slimmer hull with thinner armor and initially had 88 mm anti-aircraft guns. In contrast, Admiral Graf Spee had thicker armor on the main belt with a wider hull and 105 mm (4.5 inch) guns instead of 88 mm cannons. However, their two sister ships were also converted to 105 mm cannons in autumn 1939.
Admiral Scheer and Admiral Graf Spee had a tower bridge, while Deutschland had only one pile foremast. Deutschland and Admiral Scheer had roll damping.
All three armored ships had an inclined main armored belt and an overlapping torpedo bulkhead aft.

These armored ships were basically relatively slow armored cruisers with a large cruising range. Although they were referred to by the Allies as ‘Pocket-Battleships’, from February 1940 the two remaining ships were classified just as heavy cruisers by the German Kriegsmarine.

To prevent so much sea water from flushing over the fore deck, the ships later received an extended bow. In order not to supply the Allies with additional propaganda material and to disguise the sale of the unfinished heavy cruiser of the same name to the Soviet Union, Deutschland was renamed Lützow by order of Hitler after the self-sinking of Admiral Graf Spee.

At the time of their design they continued the type of the First World War armored cruiser, which was faster than battleships and stronger than cruisers.
Since the ships lacked the necessary speed to determine the combat distance for their heavy 11 inch (280 mm) guns, they were already endangered by enemy cruisers with 8 inch (203 mm) artillery.
The completion of the French Battlecruiser Dunkerque, which was faster and more heavily armed and above all had the task of tracking down and destroying the German armored ships, finally turned the type of armored ship into old iron overnight. That’s why the planned three more units of the Deutschland class were never built. The already finished guns were however installed on the battlecruisers of the Scharnhorst class.

The armored ships Deutschland and Admiral Scheer as well as Admiral Graf Spee also conducted as raiders. Admiral Speer had a short but successful mission as raider, in which the sinking of the ACM Jervis Bay is to be emphasized.

Lützow caught two heavy torpedo hits and spent a lot of time repairing in the dock. The first time on 11 April 1940 during Operation Weser Crossing by the British submarine of the S class Spearfish and then by a British aircraft on 13 July 1941.
She then took part in the attack on the Arctic convoy JW-51 on 30-31 December 1942, which became a complete failure.

Later, like Admiral Scheer, she also took part in operations off the Norwegian coast and in the Baltic Sea, where the ships supported the Wehrmacht with their heavy artillery in the last phase of the war against the Red Army near the coast.
Both ships were finally sunk during the last days of the war during British bombing raids on ports.

Battle of the River Plate

Even before the outbreak of WW2, 21 U-boats and the pocket-battleships Admiral Graf Spee and Deutschland had sailed into the Atlantic Ocean to wait for a conflict with Great Britain and France in this large sea area.
After the outbreak of war, Admiral Graf Spee crossed the equator into the South Atlantic and operated in the sea area between Pernambuco and Cape Town. In November 1939 she briefly broke into the Indian Ocean south of Madagascar. On the way back she met the supply ship Altmark, on which she transferred the prisoners of the captured merchant ships and took over fuel.

During this voyage, the pocket-battleship sank merchant ships of about 50,000 GRT. The Allies used the aircraft carriers Ark Royal and Hermes, the battlecruiser Renown and a total of six heavy and two light cruisers to pursue her.

The squadron of Commodore Harwood with the heavy cruiser Exeter and the two light cruisers Ajax and Achilles met the pocket-battleship ship on 13 December 1939 in front of the mouth of the river La Plata.
The 11-inch (28 cm) guns of Admiral Graf Spee had a 7,980 yards (7.3 kilometers) range greater than those of the British cruisers, which at the same time could hardly resist effective German hits. Therefore, Commodore Harwood had to divide his cruisers so that they approached the German pocket-battleship from three sides. The cruisers had to pass through the ‘death zone’ of Admiral Graf Spee from 16.8 miles (ca. 27 kilometers) to 12.4 miles (ca. 20 kilometers) before they could fire themselves.

But Captain Hans Langsdorff on Admiral Graf Spee assumed it was just a cruiser with two destroyers. Since the British ships stood between the pocket-battleship and the open sea, he wanted to force the breakthrough.
The British cruisers still sailed in keel line, led by Ajax and the heavy cruiser Exeter at the end. At 6:17 the German pocket-battleship opened fire, whereupon Exeter turned south, while the light cruisers continued their course northwards.

Already at 6:20 o’clock the Exeter was able to shoot back at a distance of about 11.2 miles (ca. 18 kilometers). The light cruisers followed a few minutes later and their 6 inch (15.2 cm) and 8 inch (20.3 cm) shells soon scored hits on Admiral Graf Spee.
A short time later, Exeter was hit by a German grenade that knocked out ‘Turret B’ and killed or wounded almost all the men on the bridge. After this hit, Admiral Graf Spee switched the fire on the light cruisers and turned west, developing smoke.

When Ajax took up the pursuit, the Germans changed the fire again on Exeter. At 7:25 the two front turrets of the Exeter were switched off and at 7:30 the last turret of the heavy cruiser could no longer be turned.
Also, on Ajax two turrets were out of action in the meantime and Commodore Harwood decided to abort the battle until night to try it with torpedoes.

Exeter was no longer able to fight and marched the long distance back to the Falklands, while the likewise damaged Admiral Graf Spee was shadowed by Ajax and Achilles on her way to Montevideo.
There were still several fire exchanges throughout the day, but neither side wanted to fight the battle until the decision was made.

Shortly after midnight, Admiral Graf Spee arrived in Montevideo. Langsdorff had chosen the port on the advice of his navigation officer, although the ship would have had a sympathetic reception in nearby Argentine Buenos Aires.
In Uruguay, the hectic attempts to leave the ship in port for more than 72 hours to repair the battle damage were unsuccessful. At the same time, the British propaganda faked an overwhelming force in front of the La Plata to German Captain Langsdorff, while in fact only the heavy cruiser Cumberland, returned from the Falklands from repairs to the squadron of Commodore Harwood, strengthened the two light cruisers Ajax and Achilles.

The German leadership in Berlin gave Langsdorff the choice of either breaking out with the ship or sinking her by himself. The lack of ammunition of Admiral Graf Spee and the strength of the pretended British naval power with allegedly the aircraft carrier Ark Royal and the battlecruiser Renown let the German captain choose the way of self-sinking.

After the majority of the crew, all wounded and prisoners had been taken off board, Admiral Graf Spee left the port on the afternoon of 17 December 1939 and the limited crew left the ship, which was then blown up with the remaining ammunition.
Captain Langsdorff put an end to his own life on 20 December 1939 according to the tradition that no commander should survive the loss of his warship.

Captain Langsdorff earned respect from both enemy and friend for his chivalry in dealing with the captured merchant ships and their crews, but a determined and suspicious man would never have gambled a warship, which had the combination of high speed and strong armament, against three cruisers.