Now generally recognized as the RFC’s first true fighter, the Airco D.H.2 reached France early in 1916. By that time the Fokker E monoplane had gained ascendancy over the Western Front on account of its forward-firing machine-gun, to which the RFC had no effective reply as no British interrupter gear had been developed to allow a gun to fire through the propeller disc.

Instead, the DH2, first flown in July 1915, perpetuated the DH1’s pusher engine layout in which the pilot was seated in the extreme nose. In the new airplane he was expected not only to fly the aircraft but also to manhandle his single drum-fed Lewis gun from mounting to mounting, one of which was located on each side of his cock­pit. In due course RFC pilots learned to use the Lewis gun as a fixed weapon, aiming the whole aircraft at its target.

Of orthodox fabric-covered wooden construction, the little DH2 possessed an all-up weight of no more than 702 kg (l,547Ib) with a Le Rhone engine, the entire tail unit being carried on four struts attached to the wings. Most ser­vice aircraft were powered by the 110­hp (82-kW) Gnome rotary driving a two-blade propeller.

First RFC squadron to take its DH2s to France was No. 24 Squadron (com­manded by Major Lanoe G. Hawker, VC, DSO), which arrived at St Omer with 12 airplanes on 7 February 1916. In the next three months Nos 29 and 32 Squadrons followed and these three units participated in the bloody Battle of the Somme, constantly engaging the German Fokker E III monoplanes on fairly equal terms, In due course the type also served with Nos 5, 14, 17, 41, 47 and 111 Squadrons of the Royal Flying Corps, and two aircraft flew with home defense squadrons: one, flown by Captain (later Air Marshal Sir Richard) Saundby of the Orfordness Ex­perimental Station, attacked the Ger­man airship L 48 on 17 June 1917. 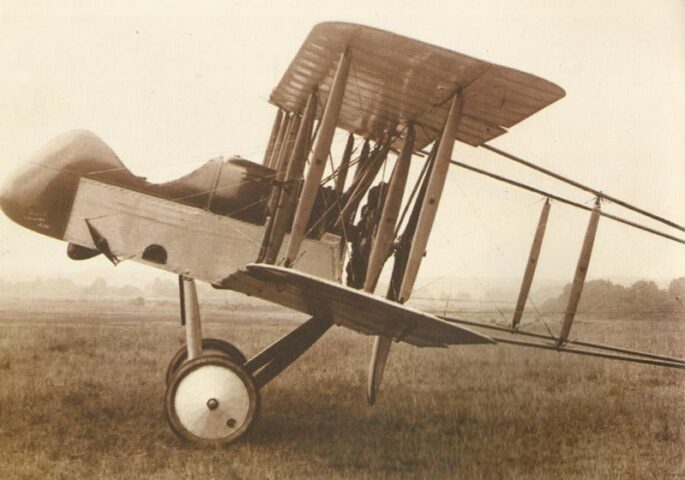 Side-view Airco de Havilland 2. This machine has no mounted machine-gun. With the DH2 in service the Fokker plague was was over and becuase there was no better fighter, it was a first-line plane until 1917.

A DH2 single-seat ‘pusher’ biplane, which was used successfully against Fokker E biplane in 1916, but out-climbed and out-speeded in turn by following designs. 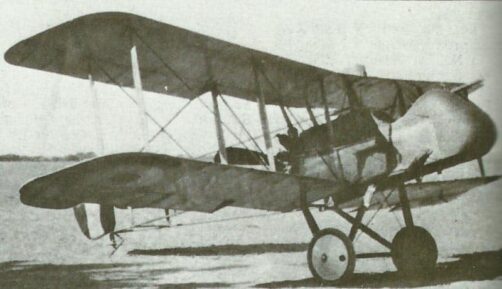 This DH2 were flown by RCF squadrons in Palestine after they had been withdrawn from operational use on the Western Front early in 1917.

By early 1917 the D.H2 was outclassed in France, however, and was withdrawn for service with Nos 17 and 111 Squad­rons in Palestine, and with No. 47 Squadron in Macedonia.

In the course of 774 combats by DH2s in France, No. 24 Squadron pilots destroyed 44 enemy aircraft. In another fight the commander of No. 32 Squadron, Major (later Group Captain) LWB Rees, won the Victoria Cross for his single-handed attack on a formation of 10 German aircraft on 1 July 1916.
On 28 October that year the great German fighter pilot, Oswald Boelcke, lost his life when his Albatros collided with another German aircraft during combat with DH2s of No. 24 Squadron. A few weeks later, in one of the war’s longest air combats, the supreme fighter pilot, Manfred Freiherr von Richthofen, fought and eventually killed Major Lanoe Hawker, No. 24 Squadron’s gallant commander.