The Nieuport 11 found its roots in a tiny, single-seat biplane, operated by an 80 hp Gnome power plant, de­signed by Gustave Delage to successfully com­pete in the 1914 Gordon Bennett event.
The competition was terminated by the beginning of World War One, however the Nieuport 11 was rapidly authorized for manufacturing as a single-seat fighter for the French air force.

Beginning in March 1916 furthermore, they worked in France with the Royal Flying Corps, fighting together with the D.H.2 as well as F.E.2b the job of defeating the Fokker monoplanes. There aren’t any noted Royal Flying Corps serial numbers regarding Nieuport 11s, despite the fact that 5 numbers were assigned to ‘Nieu­port 13s’. These could have been Nieuport 11s, which were some­times known as ’13s’ – a reference to their metric wing area, and never an authorized naming.

Several Royal Flying Corps serial numbers had been allotted to unspecified ‘Nieuport Scouts’, and likely a few of these had been Nieuport 11s. Normal power plants were the 80 hp Gnome and Le Rhone engines, and the Nieuport 11 was typically equipped with one single Lewis machine-gun above the top wing. Along with service in France, the Nieuport 11 seemed to be in action in the Dar­danelles by the Royal Navy Air Service.

In Italy, Macchi built 646 Nieuports 11s, that have been standard single-seat fighters in Italy and Albania until summer 1917. Many others delivered to Belgium and Russia, and 5 were purchased by the Dutch, where an additional 20 were afterwards constructed under license.

In 1916 a more powerful version came out: the Nieuport 16, operated by a 110 hp Le Rhone engine and equipped with a synchronized Vickers machine-gun for the aviator rather than the over wing Lewis. A few Nieuport 16s transported Le Prieur rockets around the interplane struts, by which they acquired some good results in shooting down rival observation balloons.
It appears that the Nieuport 16 didn’t see action with the Royal Navy Air Service.; it is noted to have delivered to Nos. 29 and 60 Squadrons of Royal Flying Corps., however the total quantity in British service is unknown. You can find 9 serial alloca­tions for Royal Flying Corps. Nieuport 16s, although as described before some others may be ‘hidden’ within the significant numbers of anonymous Nieuports.

Throughout the crucial time when the Fokker Eindecker ruled su­preme within the Western Front each of the Nieuport 11 and 16 carried out valiant services. They were flown by a lot of famous French squadrons and aviators, such as de Rose, Guy­nemer and Nungesser of Escadrille N.65.

As soon as the Nieuport 16 ap­peared, several Nieuport11s were taken out of service for modification to Two-seat training planes, and refitted with Clerget 7 Z power plant. 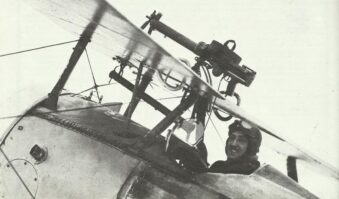 The Lewis machine-gun is mounted on the upper wing of Nieuport that it can not hit the propeller blades. 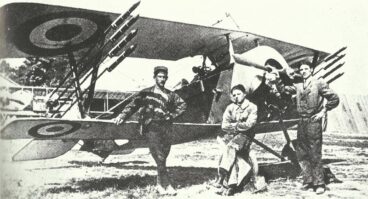 Nieuport with Prieur rockets on the wings.

French Nieuport 11 ‘Bebe’ on an airfield.