Great Britain was among the first countries where the Maxim machine-gun was introduced after a demonstration in 1887. The construction was carried out by the Maxim Gun Company, of which Albert Vickers was chairman of the board.
Later the company became Vickers’ Sons & Maxim Limited and a production line for various models was set up in Crayford in Kent and Maxim machine-guns from the factory were delivered to many other customers in addition to the British Army.

Although the Vickers engineers were aware of the advantages of the Maxim machine gun, they considered whether a new design could save some weight. Through careful load studies, a good part of the mechanism was gradually made lighter and the basic function reversed, so that the toggle lock invented by Maxim also became lighter. The parts originally made of bronze were also replaced by quality steel.

This can be better understood by looking at the sequence of functions that occur in the Vickers’ short recoil mechanism.

At moment the cartridge was fired, the toggle switch mechanism, which consists of two levers, was in line with the center hinge line with both levers. This gave the mechanism a very positive and strong lock and the only way to open the toggle joint was to move upwards. This was not carried out at the moment of the shot, as the recoil forces tended to push the breech block backwards in a straight line. When the cartridge left the barrel, the gases escaped into a small muzzle chamber and pushed back the barrel, which in turn exerted more force on the breech block. Together they moved backwards and the two toggle levers hit a fixed point, the lever being set up so that it was pushed upwards. This ended the positive locking and the barrel could now move further back independently, taking the used cartridge case out of the chamber.
At the same moment, reloading could take place, in which the locking breech block moved backwards and placed a charge on a spring, the so-called fusee spring. This caused the breech block to return to its original position.
This operation was performed as long as the trigger was pressed in front of the gunner’s handle.

The resulting weapon became the Vickers Gun. It wasn’t much lighter than a comparable Maxim machine-gun, but it was much more efficient and easier to make.
It was taken over for service in the British Army on 26 November 1912 as Gun Machine Vickers 0.303-in Mk I and the entire production was initially taken over. Ten more Mark model numbers should follow.

The Vickers Group later built the machine-gun in London for the armies of Canada, India, Australia, New Zealand and other countries of the British Dominions. The American company Colt also built it during the First World War for the American and Russian armies and specimens built in Great Britain also went to Italy.

At that time, however, the British Army still regarded the machine-gun with such suspicion that it was only introduced at a rate of two per infantry battalion.

With the outbreak of the First World War, however, the allocation changed drastically. New production centers were soon established, some in the Royal Ordnance Factory’s state-owned factories, but the basic design remained untouched throughout the long construction period. The last built Vickers machine-gun was still like the first and changes concerned only details.

The mechanism of the Vickers Gun reflects the era in which it was designed. It was a complicated construction to solve a demanding task, which involved the supply of ammunition of rim cartridges from a fabric belt.
As a result, it was a hard way to build it, which required expensive machines and accurately fitting components made of critical materials. Despite or precisely because of this, the Vickers Gun has become synonymous with reliability.

Like most machine-guns of that time, the Vickers Gun was affected by mechanical jamming, most of which was caused by the ammunition. Other mechanical failures in use, however, were rare.

Therefore, a series of exercises were performed to quickly get the weapon ready to fire again. Thus, 25 possible different types of jamming were listed in the drill book, together with the associated symptoms. It was mentioned that when the weapon stopped firing with the handle in one position or another, this or that was the cause and how it could be fixed. This required a good memory and a cool head from the gunner in the heat of the battle.

Therefore, this drill required some practice, so that over time the special Machine Gun Corps was formed within the British Army, so that the experience and skills were limited to a relatively small group and did not have to be distributed across all regiments of the expanding army.
The Machine Gun Corps also developed its own corps spirit, which led the machine-gunners to use their weapons with a little more temperament. Their cap badge showed two crossed Vickers machine-guns.

However, these interruptions during firing were rare and did not affect reliability over a longer period. In use, the Vickers machine-gun could shoot as long as ammunition was available.
Vickers Guns fired fantastic amounts of ammunition during fire support tasks, especially during the First World War. A weapon shot 10,000 rounds per hour over a period of 12 hours, a reliability which could hardly be halved by modern designs made of pressed steel and supposedly wondrous spring constructions.

The Vickers machine-gun was usually mounted on a heavy tripod. But there were variations of the basic design, including air-cooled versions for use in aircraft, which were usually fixed and rigid.

The Vickers Machine-Gun Mk 1 had performed well during the First World War and surpassed almost all of its contemporaries in many respects. Consequently, the Vickers Gun remained the standard weapon in the British Army and many Commonwealth forces even after 1918.
Many were also exported all over the world, most of which were stored weapons, as production at Vickers main production site in Crayford, Kent, continued at a low level after the end of the war.

Many other variations were built between the two World Wars and the Vickers machine-gun is still used by some armed forces today. Despite its outdated design, it was reliable and popular with the soldiers.

Some innovations were nevertheless introduced before 1939, the outbreak of the Second World War. The widespread introduction of tanks and other combat vehicles had led to a reconstruction of the Vickers Gun as part of their armament. From 1939, Vickers produced two special types of machine guns for installation in tanks.
These were available in two calibres: the Vickers-MG Mk IVB, VI; VI* and VII in calibre 0.303in (7.7 mm) and the Vickers-MG Mk IV and V, which fired a special 0.5in (12.7 mm) cartridge.
Both were initially built for all tank types, but the introduction of the air-cooled Besa machine-gun for the mass of larger tanks meant that most Vickers models were only used in light tanks or infantry tanks such as the Matilda tank.

The 0.5in (12.7mm) machine-guns were also built in a number of variations for the Royal Navy as the Vickers Mk 3 machine gun, with all possible air defense mounts on ships or naval bases.
The installations in ships contained quadruple mounts, but the cartridges which were manufactured for it were not successful and turned out to be too powerless. Nevertheless, due to a lack of alternatives, the weapons were built in several quantities and later replaced by 20 mm-cannons and similar weapons. 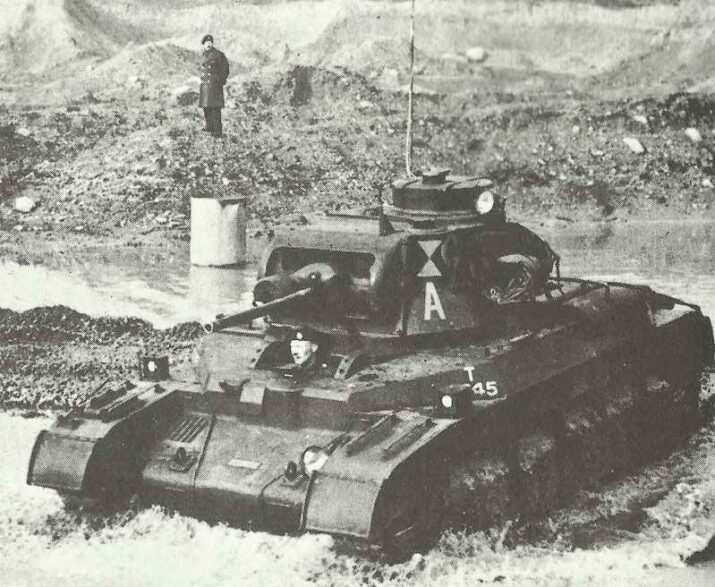 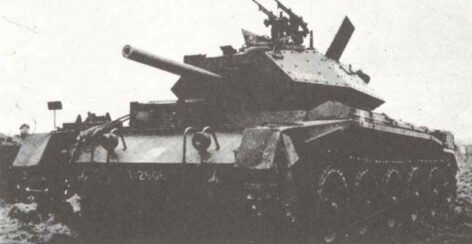 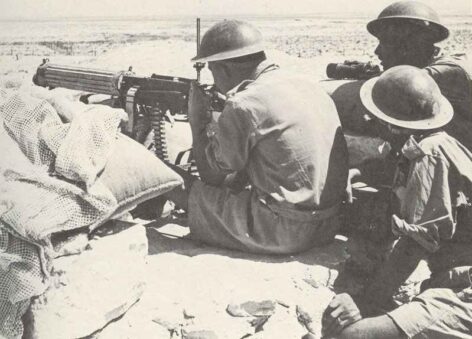 Vickers heavy MG about to open fire with the 1th South African Division of the Eight Army. 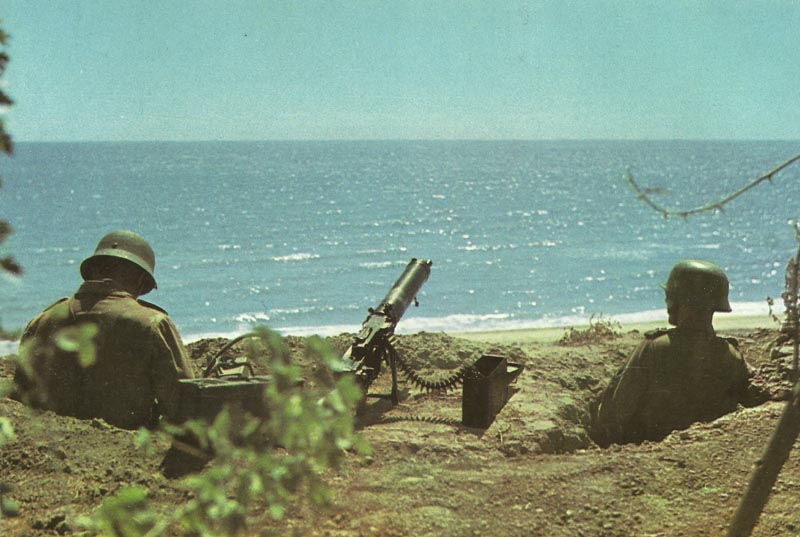 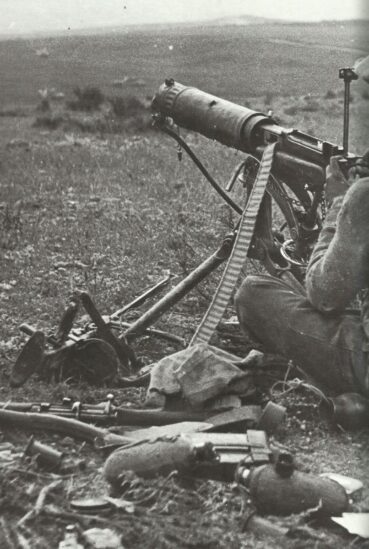 The Vickers machine-gun was also used in some numbers in 1939 and by 1940 all old stored weapons had been retrieved to replace the material lost in Dunkirk, to equip the Home Guard and to have more air defense weapons available to defend the British Isles.
Also, the production was increased again strongly and the need was so large that even losses were accepted with the equipment of the weapons. The most striking feature was the replacement of the corrugated cooling jacket with a simple, smooth one.
Later a new muzzle brake was designed and until 1943 the new Mark 8Z tail bullet was widely used, which had an effective range of no less than 4,500 yards (4,100 metres).

Only on 24 April 1968 was it declared obsolete by the British armed forces and the last disappeared only in the 1970s in the Royal Marines. Thus, the weapon had survived all the others of its contemporaries for a considerable period. The Vickers machine-gun is still used by the armies of India and Pakistan.
According to many experts, the Vickers machine-gun was one of the best machine guns of the First World War and is still a useful weapon today.