The final battles, as PoW and documents.

Pictures from the final battle as well as documents from the time as POW and Nazi era.

In the last phase of war in Germany, the remaining soldiers of the 214th Infantry Division were formed in a battalion, which should be used for rebuilding. However, there was not enough time anymore and the soldiers were implicated in the final battles of Army Group Center.

Especially at Army Group Center under Schörner, during the last stage of WW2, this was a normal picture. Who does not want to continue fighting in the senseless battle or was suspected to desertion after scattered, was immediately hanged or shot. Here a German Major on 8th April 1945 (third-party picture).

The Polish 2nd Army covered the southern flank of the Russian advance to Berlin. Between 25th April and 6th May 1945 Army Group Center attacked the flank of the Polish Army from Bautzen in the direction of Berlin-Cottbus. The Polish Army was temporarily forced to retreat in northern direction. In this last battle the grandfather of the author fell with his unit in Polish hands (April 30th, 1945). As he always had described, the Polish soldiers were at most decently against the German PoWs. An NS warning from November 1943 or 1944 for the grandmother of the author in Frankfurt: ‘unfortunately, after reviewing the contribution lists, I had to find out that you still have no idea about the sense of the Victims Sunday. The amount subscribed by 30 or 50 ‘Pfennigs’ (small coins) is not a victim, it’s only a ridiculous tip. I remind you to the Stalingrad fighters, as well as fathers, sons and brothers at the front who are giving their lives for us at home and for Germany’s future. For this reason, I directed to you this reminder and are hoping that you will not leave the community of the people. I’m expecting that you will give a victim at Victims Sunday in future – because it is about to be or not to be. ‘
‘Heil Hitler’, signed Becker, Head of cells (lowest NS leader for a block of buildings)

Explanation by the author:
A warning as member of the community of the people could be called for violations to the People’s Community. These included the shopping in Jewish shops, to small donations, as a house owner not to make enough housings available, etc.

After the warning, if a person once more rejects against the community of the people, it was a case to the Gestapo (Secret State Police) and was made punishable by imprisonment.

Extracts from the hard to read diary of the grandfather of the author, called ‘As Polish Prisoner of War’, from 1945 to 1947. Here is an example from May 7, 1946 at Warsaw, in the evening 10-11 clock: Alarm at the garage – workshop explosion. Had in the evening earache. Made a steam bath and laid me down, was sweating. Could not get up. When Hans (? – not exactly to read, but probably another German soldier) went away and the room was dark, the guard came to my bed and gave me FIVE (5!) hits with the butt. Witness is Josef Haldesheim (another German).

Author’s Note: The story, which tells the diary, is a constant trouble with SS soldiers, which feared their discovery and handing over to the Russians, resulting in a much longer captivity in Siberia or the execution. 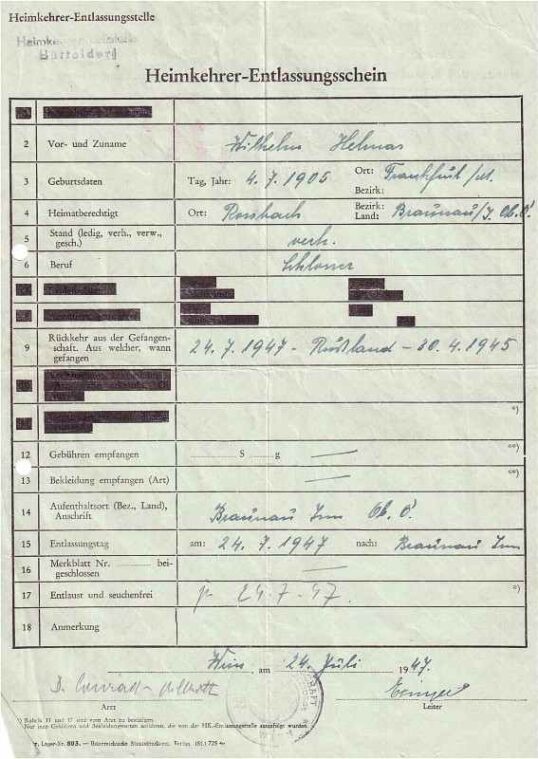 The dismissal paper from captivity from July 24.,1947.

Backside of the dismissal paper from captivity. 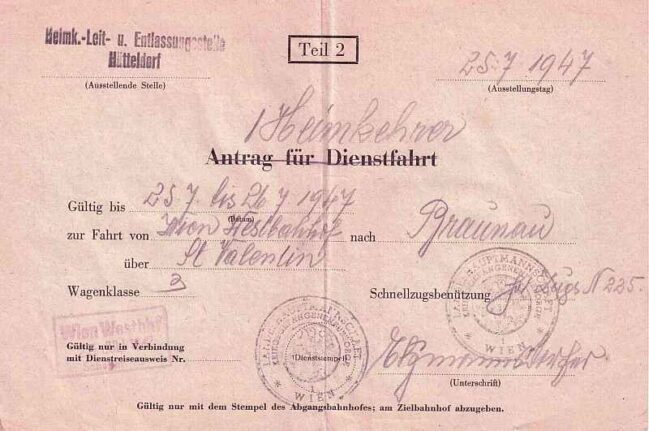 The train ticket to home.

Previous page: Battle at the Vistula 1945

Next page: Collection of pictures about Hitler