Creation and Campaigns of the 12th SS Panzer division Hitler Youth.
Designations, commanders, insignia, organization, in Normandy 1944, Battle of the Bulge and in Hungary 1945.

Although the members of the Hitler Youth organization had already been encouraged to volunteer for the Waffen-SS, the ‘youth leader of the German Reich’, Artur Axmann, suggested to the Reichsführer SS, Heinrich Himmler, to set up a complete SS division with boys born in 1926.

Adolf Hitler approved this plan and appointed SS-Gruppenführer Berger as commander, who had even suggested himself to the Führer. Himmler, on the other hand, reasonably preferred a battle-hardened veteran with close ties to the HJ (short for Hitlerjugend = Hitler Youth). This was the 35-year-old SS-Standartenführer Fritz Witt, who was regiment commander in the 1st SS Panzer Division Leibstandarte-SS-Adolf Hitler and had received the Knight’s Cross with oak leaves. Witt thus became Germany’s second youngest general – after 31-year-old Major General Adolf Galland of the Luftwaffe – when he was appointed SS Brigade Leader on 1 July 1943.

In May 1943, the first 8,000 seventeen-year-olds arrived for a two-month preparatory introduction. From July to September 1, 1943, 16,000 young men formed the units of the Hitler Youth Division at military training areas around Turnhout in Belgium.
The cadre of battle-tested officers and non-commissioned officers came mostly from the Leibstandarten Division, but also from all other SS tank divisions and a number of army officers were also transferred to the new SS Division. In addition, war-proven front soldiers of the army and air force, who had emerged from the Hitler Youth, were transferred to this otherwise pure recruit division.
One infantry fighting vehicle battalion and five motorized Panzergrenadiers infantry battalions received Italian booty vehicles before they received modern German equipment until May 1944.

Originally a Panzergrenadier Division, the formation received the number ’12’ and was expanded to a Panzer Division on 21 October, together with a complete Panzer Regiment with 218 Panzer IV and Panzer V Panther. The SS-Panzer-Regiment 12 was set up from summer 1943 mainly from the I.//SS-Pz.Rgt.1 of the LSSAH and was strengthened until November to the Pz.Rgt.12 ‘HJ’.
The division was renamed at this moment to 12th SS-Panzer-Division ‘Hitlerjugend’ or short only ‘HJ’.

The Panther detachment was not completed until the beginning of 1944 in Mailly-le-Camp by incorporating the Army’s Panzer Brigade 10. The tank reconnaissance detachment 12 was completed in September 1943 at Rurnhout and the tank artillery regiment 12 at the same time at Mol in Belgium. In the spring of 1944, the 1st detachment received 18 self-propelled howitzers Hummel and Wespe and light armored infantry fighting vehicles as armored artillery observation vehicles. At the same time the SS Rocket Launcher detachment 12 from Bohemia and the Panzer Flak detachment 12 each with four batteries arrived at the division.

Even taking into account the cadre, the average age in the division was only 18 years. And instead of the usual cigarette rations, sweets were handed out to its members.
In April 1944, the division was declared front-ready and moved to northern France under the command of the I SS Panzer Corps.

When the Allies landed in Normandy on 6 June 1944, the 12th SS Panzer Division Hitler Youth was ordered to the front. After a night march, it was the first SS formation to go into action on 7 June.
A combat group under the commander of the SS-Panzergrenadier Regiment 25, SS-Standartenführer Kurt Meyer, including a battalion with PzKpfw IV, drove the 27th Canadian Armored Brigade away from the Caen-Carpiquet airfield. The young soldiers succeeded in destroying 28 Allied tanks during their first combat mission, while they only had six men to lose.

This scheme was repeated for the next month. The teenage soldiers followed their experienced officers in a series of highly effective attacks against the British and Canadian troops around Caen.
However, a consequence of their inexperience combined with fanaticism was high losses. In four weeks the division suffered 60 percent losses. In addition, violations of the Geneva Convention occurred when, on 16 June 1944, some 65 Canadian and British prisoners were murdered.

For these war crimes of the division Kurt Meyer was sentenced to life imprisonment after the end of the war, from which he served nine years. On 16 June Franz Witt was killed by fire from warships and command of the 12th SS Panzer Division Hitlerjugend was transferred to the 33-year-old ‘Panzer-Meyer’. He led the division in almost continuous battles against strongly superior opponents until the survivors were withdrawn to the Potigny area on 11 July.
There was a refreshment close behind the front line by field replacement units, which partly came from the Luftwaffe.

Only a week later, however, Hitler Youth was back in the front line to meet the British operation ‘Goodwood’. At the beginning of August, however, the 1st SS Panzer Corps was separated, with the LSSAH being sent west to Avranches, while the Hitler Youth held the northern corner of the Falaise pocket, with 90,000 German soldiers to be enclosed by the Allies.
Fighting fiercely against the 4th Canadian and 1st Polish armored divisions, Meyer fought with great determination, despite an overwhelming enemy artillery superiority, while at the same time the Allied fighter-bombers ruled the skies.
Hitler Youth escaped from the pocket, but of the other troops around Falaise, only 30,000 could do so. Meyer was wounded as he held Hill 159 with only 500 Panzergrenadiers against the 3rd Canadian Infantry Division.

Elements of the 12th SS Panzer Division were at that time at Rouen on the Seine for refreshment, where they formed a line of defense against approaching US troops. Until 25 August these troops held their positions to enable other German units to retreat across the river.
Only 3,300 survivors of the 12th SS Panzer Division Hitler Youth reached the Belgian border. By the beginning of September the division had reached the Meuse River, but Meyer was captured by Belgian resistance fighters and Hitler Youth consisted of only 600 operational soldiers and had no tanks left. 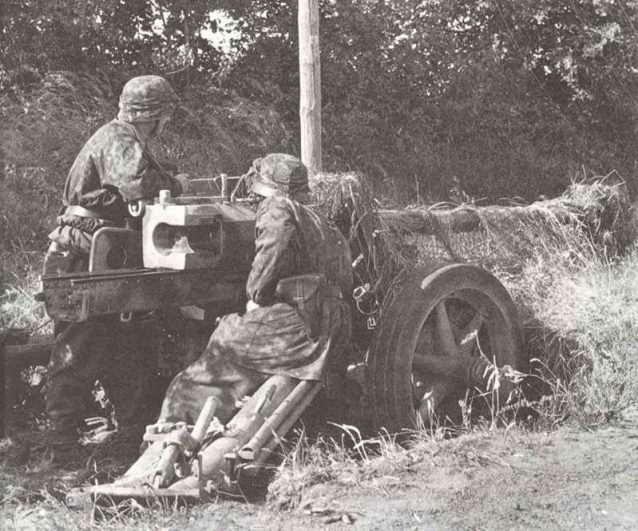 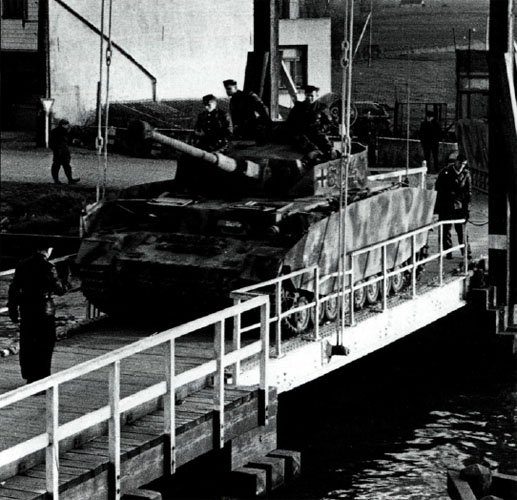 Panzer IV of the HJ crosses a canal.

Battle of the Bulge

HJ’ was pulled out of the front at the beginning of October 1944 and refreshed in the area of Diepholz and Bassum near Bremen. In the middle of December the transfer to Eifel took place and the 12th SS Panzer Division Hitlerjugend took part in the Ardennes Offensive (Battle of the Bulge) within the 6th SS Panzer Army.

Divided into four battle groups for attacks on the Elsenborn ridge, the division made little progress. From 16 December, the attack took place via Losheim on Rocherath and Krinkelt until 18 December, then on Büttgenbach from 19 to 22 December and then via the Ourthe sector against the northern flank of Bastogne.
On 1 January 1945 it was in the siege ring around Bastogne, but until 18 January all the troops there were forced to retreat. HJ had already received a brief refresher at St Vith and marched on 12 January 1945 in the direction of Cologne, from where it was to be moved to the Eastern Front. In Cologne the division received further replacements and new material. 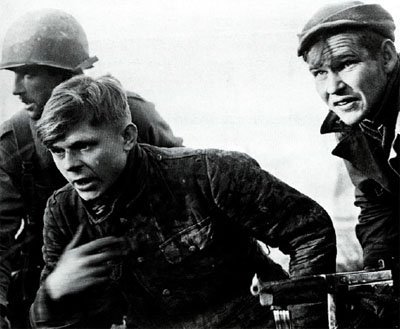 Young soldier of the Waffen SS captured by American paratroopers at Bastogne. 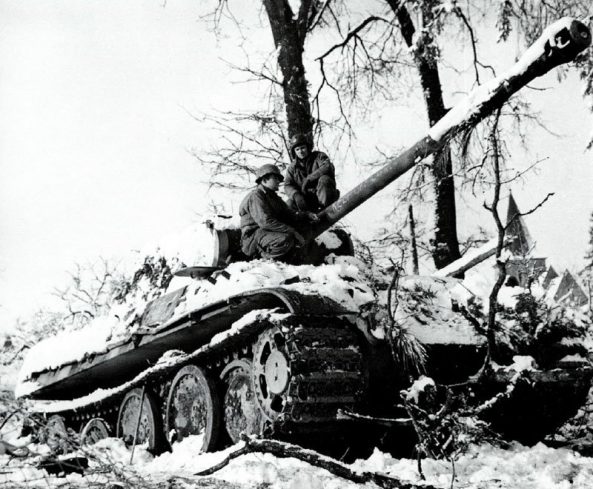 Panther tank of the HJ-Division left behind at Bastogne.

From the end of 1944, the division received most of its replacements from disbanded units of the Kriegsmarine or Luftwaffe. These soldiers were mostly of older age, had received only a short training as infantrymen years ago and had no experience in ground combat. However, they were comprehensively trained in the Division Combat School and then joined the combat troops without major disadvantages.

After the cessation of the Ardennes offensive, Hitler Youth was sent to Hungary together with the Leibstandarte to take part in the ‘Spring Awakening’ offensive. This offensive took place in the area of Lake Balaton with the final goal to lift the siege of Budapest, which was surrounded by Soviet troops.

At the beginning of February 1945 the division fought in a successful preparatory operation in which a Russian bridgehead across the river Gran was smashed. The main offensive took place on 6 March, but was forced to a premature halt by a combination of completely unsuitable terrain for tanks and persistent Russian resistance.
The I SS-Panzer-Korps, which included not only the Leibstandarte but also the Hitler Youth, was forced to retreat to the northwest and was pushed back to Vienna by 13 April.
At that time the total strength of the 12th SS Panzer Division Hitler Youth – including the soldiers in military hospitals and separated from the division – was just over 7,730 men, but the actual fighting strength was much lower.

Until the beginning of May the defense took place in the Viennese forest, southwest of Vienna. Now, the only priority was to march west towards the approaching US Army in order to escape capture by the Soviets.
On 8 May 1945, 455 survivors surrendered to the 52nd US Infantry Division near Enns in Austria with a single tank of the Hitler Youth – of originally 21,300 soldiers.

Fifteen members of the Hitler Youth Division were awarded the Knight’s Cross.

The only special insignia that were officially authorized were a cuff band that reproduced the name of the division in Latin script. This was produced only in machine-woven version in ‘BeVo-like’ format.

Another cuff band existed in machine-embroidered form with the inscription in Sütterlin letters. However, this was not a cuff band authorized by the Waffen-SS, but was intended for the Hitler Youth leadership. Nevertheless, photographs show that this cuff band was also worn by members of the division.