Creation and Campaigns of the SS-Verfuegungsdivision (later Reich) from 1939 to 1942 (Part I).

Designations, Commanders, Western and Balkans campaigns and in Russia.

The division had its origin in the previously existing SS-VT regiments Deutschland, Germania and Der Führer, together with engineers and members of the SS-Pioniersturmbann and SS-Nachrichtensturmbann intelligence troops.
The SS-VT, or SS-Verfügungstruppe (‘disposal troops’) in its entirety, had been formed in March 1935 from the previously existing ‘SS-Politische Bereitschaften’ (political standbys). The first of these regiments of the SS-VT, which at that time were called Standarten, was ‘Deutschland’ (Germany), which was set up in Munich in September of this year.
One year later the second regiment ‘Germania’ followed in Hamburg. After the ‘Anschluss’ of Austria followed the third – ‘Der Führer’ – in Vienna.

The various units of the SS-VT – except for ‘Der Führer’, which was still in formation at that time – were deployed in the Polish campaign under the command of the Wehrmacht.
The ‘Deutschland’ regiment was deployed to the ‘Panzer-Division Kempf’ of the Army as part of Army Group A, which was to break into Poland from East Prussia to the south, while ‘Germania’ was assigned to Army Group B in the south.

‘Deutschland’ stood out during the attacks on the Polish Mlava defensive line and took in particular Hill 192, which required an attack up the hill to a hard defended position. The regiment also participated in the capture of the Polish fortifications of the Modlin Line and its soldiers were gloriously praised by General Kempf for their outstanding performance during the battle.

In contrast to its sister regiment, ‘Germania’ was not used as a coherent unit, but was split up and assigned to different army units in individual groups for support. The decision not to combine all SS units involved in the Polish campaign into a single armed force had been discussed before. Hitler, however, wished not to upset the higher Wehrmacht officers, who were hostile to any increase in the influence and power of the armed SS (later Waffen-SS) alongside the traditional armed forces.

But after the performance of the SS troops in the field had been so outstanding, Hitler ordered in October 1939 the formation of the SS Verfügungs (disposal) division under SS-Obergruppenführer Paul Hausser, a highly experienced former professional officer of the army.
In addition to the regiments ‘Deutschland’, ‘Germania’ and ‘Der Führer’, the new division was to include the SS Artillery Regiment, the SS-Pioniersturmbann (engineers), SS-Nachrichtensturmbann (intelligence), reconnaissance and anti-tank units.

At the opening of the Western campaign in May 1940, the new division attacked through Holland to unite with the German paratroopers who had landed near Rotterdam. Although the various SS-VT units were combined into one division, at the beginning of the campaign they were again divided into individual groups in order to support various army units.

The regiment ‘Der Führer’ was the spearhead of the attack, stormed across the river Issel, although the Dutch had blown up the bridge. The soldiers formed a bridgehead on the other side of the river and took the village of Westervoort. The regiment advanced more than 60 miles (100 km) in one day.
Other units met much more determined opposition, but despite greater losses they overcame the Dutch defences on the Meuse-Waal Canal.

The regiment ‘The Führer’ continued its first-class fighting performance, pushed past Utrecht and stormed through Amsterdam to Tandvoort up to the coast. The individual SS-VT units then met at Marienbourg and, as a division, proceeded together in a western direction to break the Dutch resistance on Walcheren.
There the Dutch were in an excellent defensive position and were supported by artillery and warships off the coast. The regiment ‘Germany’ led the attack and suffered heavy losses. The battle ended with a Dutch retreat instead of a successful German assault.

On May 22, 1940, the division pushed into the direction of Calais. During a night camp on the way there, the SS soldiers were attacked by French units who wanted to break out of the Dunkirk pocket ring.
The French could be stopped, even if the fighting was very hard. Once the SS-VT had regained the initiative, the SS men were successful, destroying many tanks and taking hundreds of prisoners.
The next day, the division crossed the La Basse Canal and held a bridgehead against British counterattacks.
The advance was continued by the regiments ‘The Führer’ and ‘Germania’ pushing through the Nieppe forest and pushing back the British. At that time ‘Deutschland’ forced the crossing over the Lys Canal and held its positions against powerful British tank attacks. The fight was decided by the arrival of the SS Totenkopf Division at just the right time.

On June 1, the division was pulled out of the front line to rearrange itself and prepare for the second part of the campaign, the Battle of France. This began four days later, when the SS-VT set off south through Orleans and occupied Angouleme.
In the second phase of the battle, the division was mainly occupied with mopping up the overrun areas from backward French troops, which lasted until the armistice on June 25. The SS soldiers took over 30,000 prisoners for the loss of less than 35 men.
Several members of the SS Verfügungs division were awarded the Knight’s Cross for their service during this campaign.

In June 1940 the division was moved to occupied Holland, where it spent several months waiting for the start of the Operation Sea Lion, the invasion of Great Britain.
When this operation was ‘indefinitely postponed’, the division moved back to France. During this time it lost some of its most experienced members, who formed the cadre for the new SS Wiking Division.
In December 1940, the entire ‘Germania’ regiment was withdrawn and replaced by the SS Totenkopf Infantry Regiment 11.
At the end of the month the division was officially renamed SS Division Reich.

The SS Division Reich remained in France until March 1941, when it was transported to the Balkans. During the Balkans Campaign it invaded Yugoslavia, where a group of a motorcycle reconnaissance unit of only 10 men under the command of SS-Hauptsturmführer Fritz Klingenberg drove into Belgrade. They crossed the Danube with their motorcycles in a confiscated motorboat and drove directly to the center of the Yugoslavian capital.

Together with the German military attaché still in town, Klingenberg bluffed the mayor that he was the commander of a strong army waiting for his orders directly in front of the city. His alleged troops would be ready to request an air raid on Belgrade before the storm on the city. Thus surrendered the Yugoslav capital.
Captain Klingenberg was awarded the Knight’s Cross by Hitler for this hussar ride.

At the start of Operation Barbarossa, the SS Reich Division was part of the Army Group Center under Field Marshal Fedor von Bock during the attack on Russia.
The division was not part of the first wave of the attack and when it finally invaded Russia, it was slow to move forward on the bad and completely congested roads.

The division saw its first engagement in Russia on 28 June 1941, when it pushed Russian troops out of Starzyca. However, only the timely arrival of reinforcements saved the advance troops from being cut off when an enemy counterattack took place.

Then the SS Division Reich advanced into the heart of Russia, crossed the Berezina along the notorious Pripjet swamps to Mogilev and Smolensk, they took Yelenia and held it against determined counterattacks. On August 8, the division was temporarily replaced in order to rest near Smolensk and be re-equipped.

In September, the SS Division Reich was again at the spearhead of the advance when it took Sosnitza and helped close the Kiev pocket, where over 665,000 Red Army soldiers were captured.

After another short break and the arrival of replacements for losses suffered, the division was heavily involved in the Operation Taifun, the advance towards Moscow, from 19 October.
After the capture of Gzhazk along the railway line to Moscow, it had to be defended against fierce counterattacks. Then Reich advanced further and took Mozhiask and Istra and at the beginning of December elements of the division reached Lenino, a suburb of Moscow. From here the soldiers could see the dome-shaped roofs of the Kremlin.

But now ‘General Winter’ had appeared with all his force and the heavy losses and the fanatical will of the Red Army soldiers to defend their capital had exhausted the power of the German strike. Moscow was practically at their feet, and yet the German troops were forced to move on to defense. Units of the SS-Division Reich finally came no closer than 10 miles (16 km) to the city center of Moscow and had suffered heavy losses. At that time, only forty percent of the original combat strength was said to have survived. 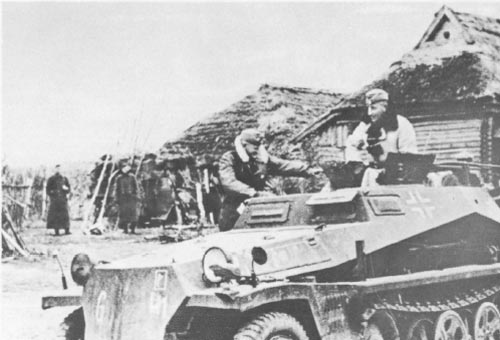 SS-Obergruppenführer Paul Hausser, Divisions commander until October 1941, in his SdKfz 253. ‘Reich’ was the spearhead of the attack on Moscow. 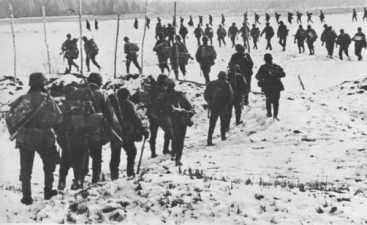 Panzer grenadiers from ‘Reich’ on the march to positions outside Moscow. 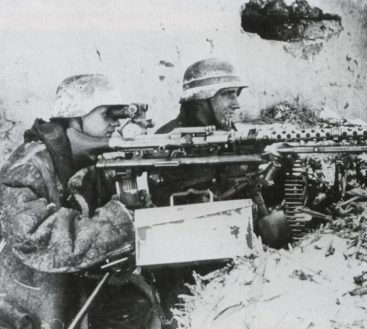 The weakened division was soon exposed to fierce Russian attacks as the Red Army began its winter counter-offensive. The Führer regiment consisted of less than 50 front-line soldiers when the exhausted unit was still clinging to the ground against Russian pressure. A retreat to the area of Gshatsk and Vyazma followed.
In January and March 1942, the division counter-attacked to Rzhev from north of Sychevka, closing the gap southwest of the city.

At the end of February the SS Division Reich was counted only as a combat group. It fought along the Volga from March to April and held its positions until the enemy pressure finally subsided.
The remains could then be given a rest before the division was finally withdrawn from the Eastern Front. It was moved to Germany and expanded into a Panzergrenadier Division. However, it was practically structured and equipped like a full-fledged tank division.

From August 1942 to January 1943 the SS-Panzergrenadier-Division Das Reich was deployed in France for the occupation service and participated in the occupation of Vichy France in November 1942.

In October 1942 the SS-Panzer-Regiment 2 Das Reich (short: ‘R’) from the Panzer-Abteilung Reich and parts of the SS-Sturmgeschütz-Abteilung 2 (StuG assault guns) and a self-propelled anti-tank guns unit, which had already been formed in February 1942 in Grafenwoehr and Wildflecken, was incorporated into the SS-Panzer-Regiment 2 Das Reich (short: ‘R’).
The SS-Sturmgeschütz-Abteilung 2 ‘R’ was raised from the regular personnel of the assault gun battery ‘R’ in autumn 1942 and consisted of three assault gun batteries until summer 1943.