The ultimate design of Japanese aircraft carrier development during World War II was a group of ships generally based on an improved Soryu class. The Unryu class had a strong resemblance to this class, but each ship differed in detail, which was triggered by experience during the course of the war in the Pacific.

Unryu was ordered under the 1941 fleet program, followed by a sister ship. The second ship was cancelled in 1942, however, and instead a series of seven carriers was approved, followed by eight more with a slightly enlarged hull.
However, as a result of the events, only five of the first successor groups were laid down, only two of which were completed by the end of the war alongside the class ship Unryu.

To simplify the construction, propulsion engines were installed for cruisers, but a lack of parts meant that Aso and Katsuragi only received destroyer turbines, which reduced the power by a third and the top speed by 2 knots.
Propulsion engines and magazines were protected by 45 mm and 150 mm armoring on the belt, and 25 mm and 55 mm deck armor, respectively. The island, flight deck, hangar and armament followed the tried and tested Soryu class patterns, although there were only two instead of three elevators.

The carriers of the Unryu class were not to be equipped with armored flight decks, which was practically explained by the fact that they were not designed for the classic role of fleet carriers. They were to form the core of attack units attacking enemy ship convoys, covered by heavy cruisers. The task of carrying out carrier battles was intended for the armored fleet carriers.
Their lighter construction also largely prevented them from using heavier attack aircraft such as the B7A and B6N, which were capable of penetrating the air defense of American carriers. However, they were considered suitable platforms for aircraft capable of kamikaze attacks.

The following specifications refer primarily to the class ship Unryu. The water displacement of the other ships varied. Thus, Amagi had a displacement of 17,460 tons and 22,800 tons respectively. For Katsuragi, the values were 17,260 and 22,530 tons, respectively, and their flight deck was 703ft 9in (237.13 meters) long.
Test calculations ranged from 19,780 tonnes of water displacement at Unryu, Katsuragi and Aso to 20,020 tonnes at Kasagi and 20,120 tonnes at Amagi and Ikoma.

The permanently installed anti-aircraft battery at Amagi and Katsuragi had 89 x 25 mm guns at its completion. Also the aircraft equipment varied. So for Ikoma only 53 machines were planned, while Kasagi, Katsuragi and Aso were supposed to take 64. However, this was probably due to a different planned composition of aircraft types on the individual carriers rather than to major differences in the size of the aircraft hangars.
Type 21 radars with two antennas were mounted on the island and one on the starboard aft edge. A Type 13 early warning radar was installed for this purpose.

Aso, Ikoma and Kasagi were never completed and work on them was stopped at the beginning of 1945. Their hulls were scrapped after the war. Aso had previously been used by the Japanese for experiments with suicide weapons.

The three carriers Unryu, Amagi and Katsuragi which were put into service had at the end of the war an armament of 89 pieces of 25 mm anti-aircraft guns each, of which 22 were triple and 23 were transportable single guns. They also had six 8-barrel rocket launchers each for air defense.

Unryu did not see a combat mission due to the lack of airplanes and fuel. In autumn 1944 patrols were carried out with some A6M Zeros and B6N torpedo bombers on board. On 16 December 1944 she was sunk off Shanghai by the US submarine Redfish.

Amagi was never used. She sank after bombing raids at Kure on 27 July 1945. The hull was scrapped after the war.

Katsuragi was not put into service. Twice damaged during air raids on Kure at the end of the war, but still seaworthy enough to be used as a repatriation ship after Japanese surrender. Later scrapped after the end of the war. 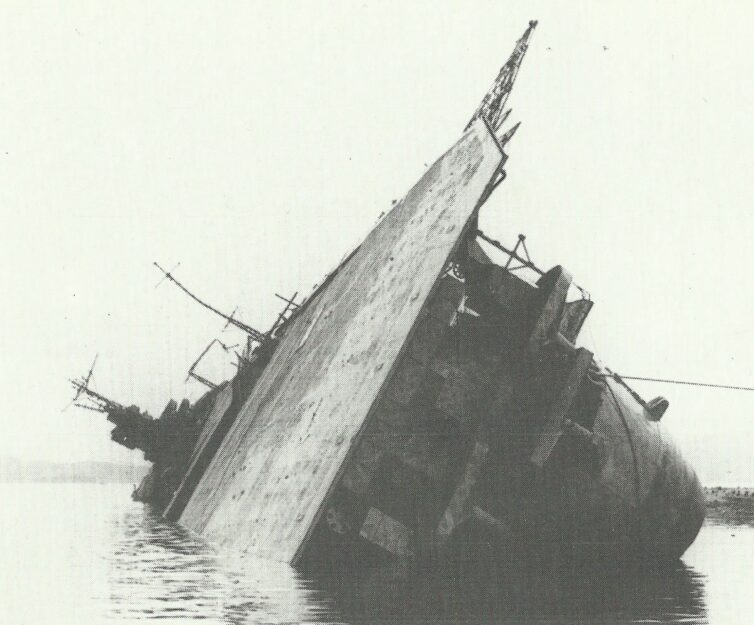 Amagi three months after the US air raid in July 1945. 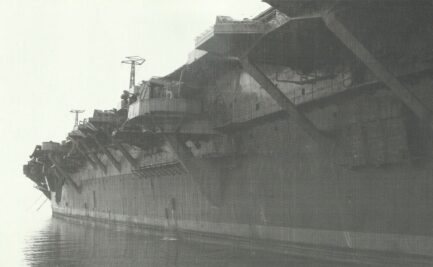 Katsuragi in October 1945 as a repatriation ship 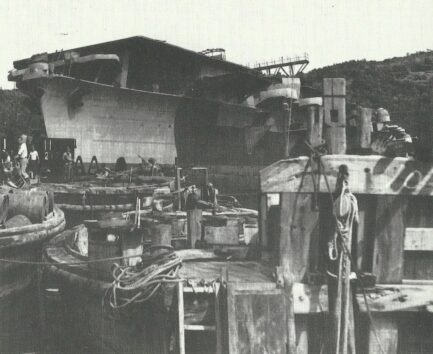 Kasagi, one of the three unfinished carriers of the class, in Sasebo on 19 October 1945

Tactically, the Japanese, as well as the Americans, focused their carrier missions on attacks against enemy naval forces. Reconnaissance, on the other hand, was carried out more by catapult launched seaplanes of cruisers and battleships.
However, the doctrine of dispersion rather than concentration of carriers formed one of their primary battle tactics after the successful strike against Pearl Harbor in December 1941. The extensive sea and air war in the Pacific from mid-1942, triggered by the American capability of mass production of warships and aircraft, hit the Japanese unprepared. This was true both for the technologies and even more so for their ability to build ships and aircraft in large quantities and to create sufficient numbers of qualified pilots.
These disadvantages led mainly to the gradual extinction of the Japanese carrier force, which had ceased to exist in 1945, and practically the entire Imperial Japanese Navy.

In 1943 the Japanese aircraft carrier force consisted of only two attack carriers, two large but slow fleet carriers derived from merchant ship designs, and three light carriers, one of which was always used for training.
Other fleet carriers were under construction and various conversions to carriers from cargo ships were available, but if the losses continued at the 1942 rate, it was clear that replacement ships would have to be made available at a much faster rate.

An emergency program for the carrier construction was started. As the Japanese situation became more and more desperate, many of these projects could no longer be realized, including the conversion of this heavy cruiser.

Details of the original cruiser design are scarce, but it appears that this was to receive 12,500 tons of displacement and an armament of ten 203mm guns. The armor was similar to the heavy Mogami class cruisers, with 100mm armor on the belt rising to 125mm along the magazines. The armor decks were from 36 to 61 mm thick, but it is unclear whether this armor should be retained in the carrier conversion. The hull was always bulged, probably to improve the stability of what was once a lively cruiser platform.

A starboard island was a feature of the revised design, with a downward vented aft chimney and the usual battery of 48 pieces of 25mm anti-aircraft guns along the deck edge. Heavy anti-aircraft fire was to be carried by two 76.2 mm/60 guns forward and there was a device for 168 anti-aircraft missile launchers.
The hangar consisted of a single section with two elevators. Half of the boilers were removed to provide additional fuel bunkers.

The conversion of the Ibuki into a carrier was ordered in autumn 1943 and her incomplete hull was towed to Sasebo. The work on the ship was somewhat irregular and was broken off in March 1945 without the slightest chance of completing the carrier.
The hull was scrapped in the post-war period.