The class represented the capital ships of the rearmament program begun in 1936. They were also the first of the ‘second generation’ battleships built under the restrictions of the international disarmament treaties. Because they were overshadowed by later and much larger ships, they have always been under-rated and criticized for alleged weaknesses. Yet, except for the Japanese giants they had the thickest armor of any battleships built in World War 2 and were technically equal to most of their contemporaries. Furthermore, three of the class succeeded in helping to destroy two German capital ships.

As early as 1934 the British government realized that the country was likely to be at war with either Germany or Japan by 1941, and possibly both, with Italy conceivably intervening. What disturbed the Admiralty was the fact that the Royal Navy was considerably under strength for such a struggle. Although nominally still the largest in the world the Royal Navy had a large proportion of elderly capital ships, the majority of which would be unfit to fight their opposite numbers.

The leading naval powers were anxious to continue the limitations enshrined in the treaties but not at the cast of their fighting efficiency. The London Naval Treaty was due to expire in December 1936, and a new conference was on the verge of being convened to discuss how the limitations on the world’s fleets might be continued. Concerned with rectifying what it saw as a serious weakness in the Royal Navy’s strength the Admiralty advised the Cabinet in May 1934 that the new Naval Treaty must allow Great Britain to build new battleships. The Admiralty was particularly anxious that they must be laid down as soon as the existing Treaty expired, even if its successor produced lower limits on size and guns.

Design studies for new capital ships had begun in the spring of 1933 to allow the British delegates to have clear objectives at the 1935 conference, just as they had had at Washington. Armour protection was given top priority, since it was recognized that even if the conference agreed to reduce gun caliber the new ships would have to face opponents with 15-in (381-mm) and 16-in (406-mm) guns for some years. Air attack with bombs of up to 910-kg (2000-lb) weight was to be taken info account. Speed was to be no more than 23 knots, the same as foreign battleships and the Nelson Class. The decisive battle range was held to be 11000-14600 m (12,000-16,000 yards); it was felt that although a higher speed of 30 knots would permit action at greater ranges, experience showed that destruction of an enemy battleship would only take place at the lower ranges.

The question of speed vexed the designers of what bad now been labelled the ‘1937 Capital Ships’. The 1935 conference led to the Three-Power Treaty between Great Britain, the US and France, but the French, with a nervous eye on Italy, would not renounce their fight to build 35,000-ton ships with 15-in (381-mm) guns. The battlecruisers Dunkerque and Strasbourg were also fast, as were the German replies to them, Scharnhorst and Gneisenau. Gun caliber was also the subject of violent changes of policy. At the conference in 1935 the British were still pressing for a reduction to 12-in (305-mm) guns for battleships, although the US wanted to retain the 16-in (406-mm), while the French and Italians had secretly already committed themselves to 15-in guns for their new ships. But the British remained optimistic about a reduction to 14-in (356-mm) caliber, and won the United States round. Since naval guns and their massive mountings take a long time to design and even longer to build, the weapons had to be ordered before the end of 1935 if the first two battleships were to be ready in 1940.

The result was that in October 1935, two months before the convening of the London Naval Conference, the Board of Admiralty recommended that the new capital ships should be 35,000-ton, 28-knot ships armed with 12 14-in (356-mm) guns. The United States insisted on a clause to allow 16-in (406-mm) guns to be reinstated if the Japanese refused to accept the Treaty terms by April 1937. In the event this happened, and so Great Britain ended up as the only country to build 14-in gunned battleships. This was at the core of most of the criticism levelled, at these’ ships, although World War 2 experience was to show that the theoretically greater range and hitting power of 15-in (381­mm) and 16-in shells made little difference in action. But in 1935 the British designers felt that to compensate for the lighter shell they should increase the number of guns from eight or nine to 12, in three quadruple mountings, a solution adopted by the Americans as well in their 14-in design, despite their 16-in. 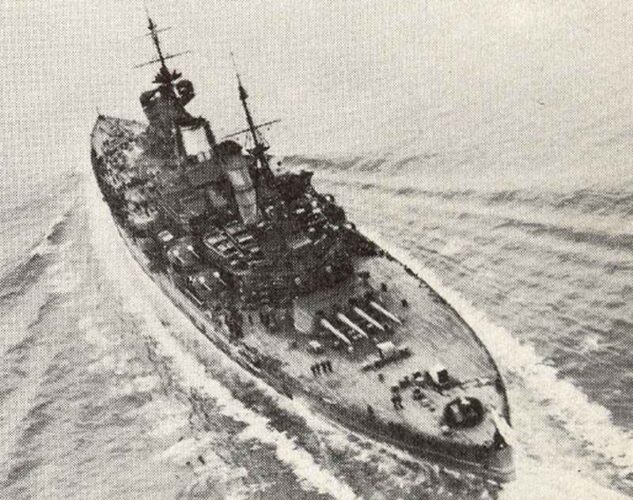 Battleship King George V as flagship of Admiral Sir Toveys during the sinking of the Bismarck. 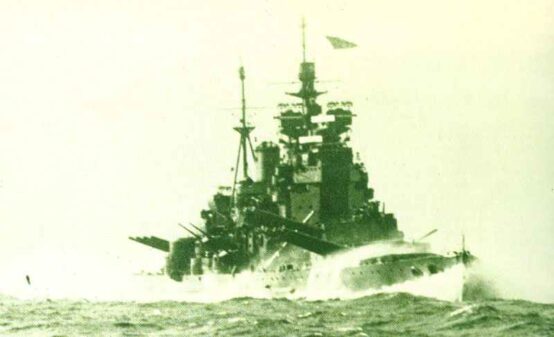 Battleship HMS Duke of York, which belongs to the King George V class, steaming ahead with maximum speed and heavy artillery ready for firing.

Battleship Howe together with a heavy cruiser of the Coventry class in the Arctic. 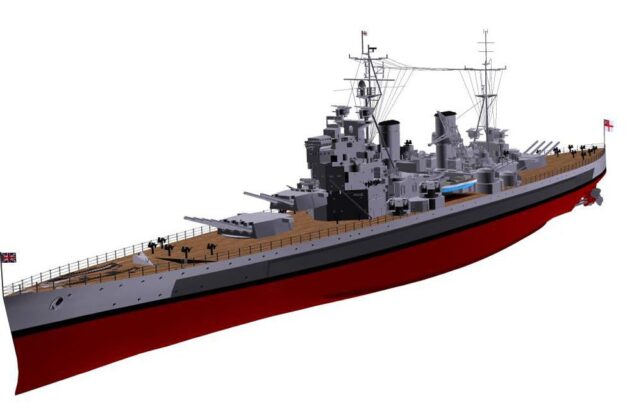 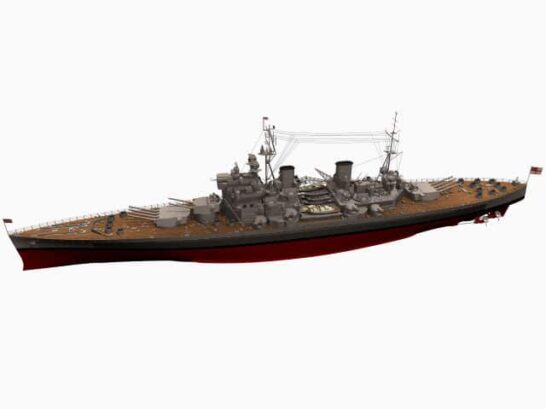 As work on the new ships progressed several radically novel features were incorporated. A new 5.25-in (133-mm) surface/ anti-aircraft gun mounting was adopted for the battleships in place of the planned 4.5-in (114-mm) gun – the first example of a dual­purpose armament. The thick horizontal armor against plunging shells and bombs was raised from the middle deck to the main deck to improve stability of the ship in a damaged condition and to reduce the volume of structure vulnerable to semi-armour piercing (SAP) bombs.

The original requirement for six aircraft had been altered, but no provision was to be made for two aircraft hangars in the superstructure, the first time this had been done in any battleships. The underwater protection system which had proved such an important feature of the Nelson Class was retained but in a much improved form.

In February 1936 a provisional program was drawn up for the two ships which gives some idea of the time-scale for building battleships, and the actual completion dates are given for comparison. The main source of delay was the armament. The guns themselves presented no problems, unlike the turrets. Three quadruple turrets had been stipulated to achieve the maximum weight of broadside, although for a time the designers toyed with the idea of nine 14-in (356-mm) guns in three triple mountings. Finally, it was decided to alter the number of guns to ten by substituting a twin mounting for One of the quads to save weight. As time was so short this sudden change can only be described as capricious. With hindsight, it is clear that nine 14-in would have been nearly as good as 12, for the simple reason that a triple turret was roomier and easier to work than a quadruple one. But either arrangement was preferable to incurring further delay while a new twin 14-in turret was designed. In any case the design of the new turrets proved more complex than the Director of Naval Construction had envisaged, and the quadruple turrets were 11 months late because of a shortage of draughtsmen.

The first two ships were Battleship HMS King George V, ordered from Vickers-Armstrongs, Barrow, and Prince of Wales from Cammell Laird, Birkenhead. The Board of Admiralty wanted to go to a 16-in (406-mm) gunned design to match the ships which it believed the Japanese were building, but to save further delay the next three battleships authorized under the 1937 Program were repeats of King George V. Despite all the delays it was still hoped to have the first ship at sea in September 1940 and the others in 1941, and King George V began her trials in October 1940. During the crisis at the time of Dunkerque, work on the last two, Anson and Howe, was stopped, but only for a few months, and they joined the fleet in 1942.

Although King George V joined the Home Fleet in December 1940 she was soon withdrawn for ‘diplomatic’ service, ferrying Lord Halifax to the US. This apparent waste of a powerful warship was, of course, to bolster British prestige by making it clear that the situation in the Atlantic was sufficiently under control to allow a new battleship to be spared. In March 1941 her sister ship, Prince of Wales, finished her builders’ trials and a month later King George V became the flagship of Admiral Sir John Tovey, Cornmander-in-Chief of the Home Fleet.

On May 27, 1941, she and Rodney brought battleship Bismarck to action. No detailed report of the battleships’ gunnery had been found, but eye witnesses report that she stood off at a range of about 12,800 m (14,000 yards) firing plunging salvos, while Rodney fired at a much shorter range. Although Bismarck took nearly two hours to sink she was completely silenced after only half an hour.

The lessons learned from the sinking of the Prince of Wales were incorporated in the Anson and Howe, and improvements were made to the two sister ships already in service. By this time the importance of shockproof mountings was recognized, as was the need to provide generators and pumps relying on more than one source of power. But above all, the loss of Prince of Wales put an end to any dreams of the battleship holding her own against air attack. Thereafter, battleships could not operate without a properly coordinated air defense, however useful they might be as anti-aircraft ships.

In 1957, the order was given to sell all four for scrap, and so, after less than a decade of active service the battleship class disappeared. Part of their relative obscurity may stem from the fact that they disappeared from public view so quickly and possibly because their achievements were overshadowed by other events. Yet they were in their day the best-protected and best designed British capital ships yet built. Despite the international restrictions under which they had been designed they proved more than adequate for their wartime tasks. On the two occasions that they saw action against enemy battleships they proved well able to look after themselves, and the single total casualty was sunk under an attack which would have sunk any battleship.