Like its German equivalent, the Italian navy preferred the building of tiny destroyer-type escorts, generally named torpedo boats. Although an extended group of similar classes had been completed through the mid-1920s, the class had lapsed for a 10 years prior to being started again with the 32-strong Spica class, laid down between 1934 and 1937. The design was dependent upon that of the Maestrale class destroyers then finishing but, though superficially equivalent in general profile, their solitary funnel didn’t have the huge trunking of that of the bigger ships, becoming it did only 1 boiler room. The primary armament was composed of 100-mm (3.94-in) guns of a fresh design with a commendable 16-km (10-mile) range. As these came only in individual mountings, 3 had been placed in the normal design of 1 ahead and 2 superimposed aft. Even though earlier torpedo boats had been equipped with 533-mm (21-in) torpedo tubes, the Spicas reverted to the prior 450-mm (17.72-in) tubes of significantly lesser striking capability and range. For several unusual purposes these were at first single, on the sides mountings only, later on swapped for the more reasonable double centreline type. As with many Italian ships, they could place mines but were additionally fitted for high-speed mine sweeping, with noticeable paravanes and associated gear right aft.

With the wartime construction program, a series of Forty two superior Spicas have also been designed. Of these, known as the Ariete class, just Sixteen were laid down, most of them being completed by the Germans following the Italian capitulation.

Of the 32 Spicas, 23 became war casualties and a two were offered, perhaps surprisingly, to the Swedish navy. The Airone and Ariel were sunk together in October 1940 when, with others, they unwisely assaulted an english cruiser force covering an early Malta convoy. Of the latter, HMS Ajax was a key player in their sinking, damaging also the destroyers Artigliere and Aviere, of which one was finally lost during tow. 12 months later another two, the Aldebaran and Altair, were destroyed in a minefield laid by the British submarine HMS Rorqual in the Gulf of Athens.

The class ship Spica, which was sold in 1940 to Sweden.

Torpedo boat Eridano of the Ariete class, build for the German navy in northern Italy. 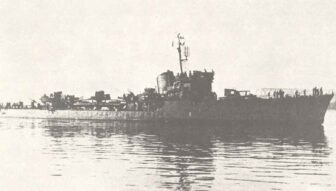 Torpedo boat Dragone of Ariete class, completed for the Germans in Genoa as TA 30 and sunk in June 1944 by British MTB’s.