One of the most influential designs in the history of the submarine, the Type XXI was to set standards until the introduction of the nuclear boat a decade later. Though both closed-cycle turbines and diesels had been introduced, both still needed development, so a stopgap high-power electric boat was produced, using mostly established technology. With the lower pressure hull packed with high power density cells, the Type XXIs could, for the first time, develop more power submerged than surfaced. Their main propulsion motors were supplemented by low power units for silent maneuvering.

The design was suggested at a conference in Paris in November 1942 as an alternative to the Walter turbine boats which were taking so long to develop, and by June 1943 the preliminary design work was complete. The first Type XXI was built in June 1944.

Like that in the Type XVII, the pressure hull of the Type XXI was of ‘double-bubble’ cross section, though externally framed. It was prefabricated in eight sections at a variety of sites, being brought together for final assembly at the shipyard. The external framing increased volume and facilitated the addition of a hydro-dynamically clean outer skin. Construction was all-welded for a target of five boats per week in an ambitious program to produce an eventual 1,500 units (U-2500 to U-4000). Most other submarine programs were curtailed or cancelled to this end. 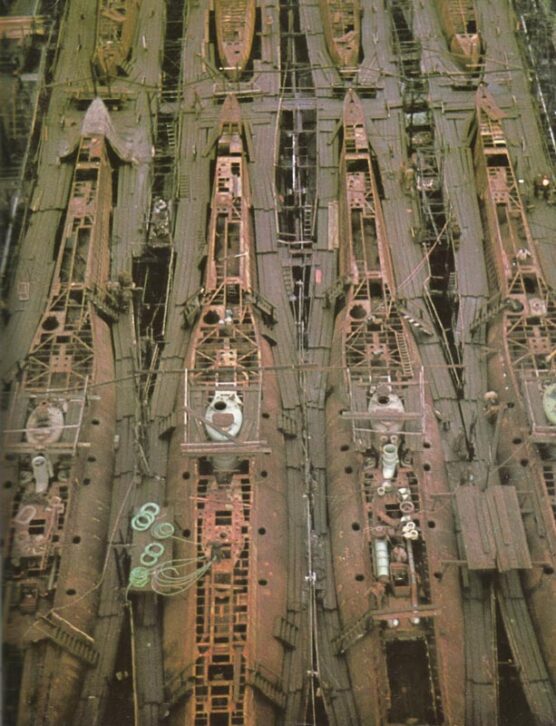 Mass production of Type XXI submarines on a German shipyard. 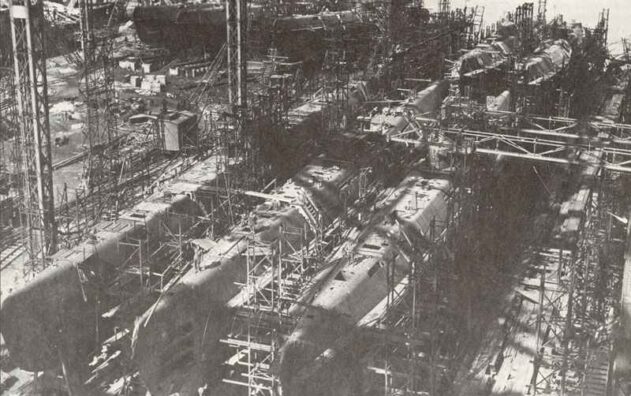 The Blohm and Voss slips in May 1945 give an idea of the level to which series production of submarines had progressed. These Type XXI boats are being assembled from hull sections prefabricated at many inland sites and transported to Hamburg by water.

U-3035 of Type XXI. On both sides of the tower is one 20-mm double anti-aircraft gun visible.

Lack of paint on both tower and steamhead are clues to the high speeds attained by the Type XXI. The hull is faired into an almost elliptical cross-section, leaving little deck, and the forward hydroplanes fold back into slots to reduce drag. 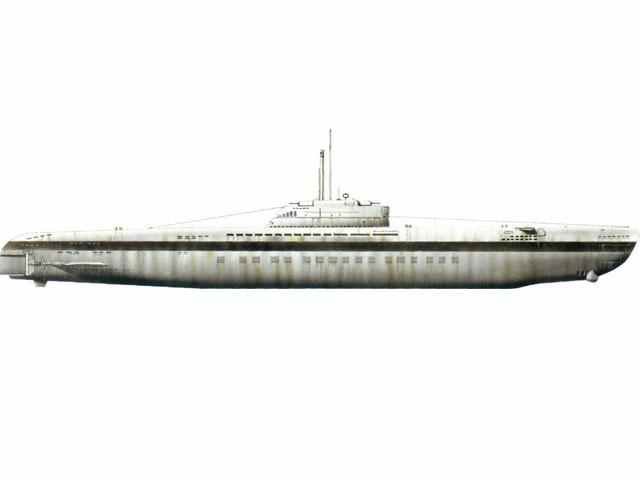 The Type XXI’s were designed to spend their full patrol time submerged, so the snort was used mainly to run diesels for battery recharge. Habitability was greatly improved, with air-conditioning and air-regeneration apparatus.
The only guns were paired automatic weapons set into the forward and after profiles of the elongated fin. A combination of active and passive sonars was used to provide a full torpedo-firing solution without recourse to the periscope.
Additional advantages of this type of U-boat were quick deep-diving capability, a fast and silent speed and rapid torpedo reloading.

Two proposed but not more built variants, the Type XXIB and Type XXIC, would have increased the number of torpedo tubes from six to 12 and 18 respectively by the insertion of extra sections into the hull.

Fortunately for the Allies, the Type XXI never became fully operational before the end of WW2. Only one Type XXI U-Boat (U-2511) – of the total of 131 commissioned – began with the first operation one week before the German surrender. Several non-operational U-boats were sunk during the evacuation voyages from the ports in northern Germany, which were threatened by Allied troops, to Norway; all by aircraft and in home waters.