This time I present you a ‘niche’ Battle Rating Line, the German BR 7.7. The only current German vehicle on this Battle Rating is the German super-heavy tank ‘Maus’ (Mouse), from which just prototypes existed at the end of WW2.

The purpose of this line is to have about 20% of all Realistic Ground Battles in War Thunder with the ‘Maus’ as a top-tier tank in order to be able to deal nicely with enemy teams with early models of the T-54 or T-44 and Stalin tanks.

And in the case we are thrown into a higher battle, we often have a surprise effect! Especially the players in Russian teams often also use medium and light tanks from WW2 – like the T-34-85 or BT-7/5 – or ZSU anti-aircraft tanks, as these are already quite sufficient to destroy German Leopard MTB’s from BR (Battle Rating) 8. But if they are in front of a ‘Maus’, they usually only have a short prayer!

The ‘Maus’ is suitable for most battles on the BR 7.7, but above especial in close-quarter fights in towns, where it can not be easily caught by the sides when used correctly and is not such an easy target for missile tank destroyers and airplanes.
Also, their large mass and number of crew members often help to survive a few penetration hits, and the heavy 12.8 cm gun (identical to the Jagdtiger) can easily destroy most opponents. In addition, it has a coaxial, much faster firing 75 mm cannon, with which light armored targets like anti-aircraft tanks can be destroyed and the guns or tracks of other tanks could be disabled.

Similar to the Jagdtiger from the German BR-7.0 Line, the best friend in the air is the Horten Ho 229, which should be used especially at own air superiority. In these battles in the high BR range, however, caution is advised for this ground attacker aircraft, as in the opposing teams are often jet fighters with better air combat characteristics and higher speed, as well as general air defense through modern anti-aircraft vehicles is very effective.

And finally, I can present you a little surprise tank destroyer: The last update of War Thunder added the Sturmpanzer II with the 15-cm-sIG-gun, which is actually on the low BR 2.3 at home. But its real potential is actually playing against larger and not quite so fast and movable targets in close combat!

For this, the following video about the use of the ‘Maus’, Horten Ho 229 and ‘Sturmpanzer II’ (all in actions starting from the BR 8):

Which vehicle line has proven itself for BR 7.7?

As usual, I would also like to show you the compilation of my full and complete (10 slots) line for Germany BR-7.7. Again, the right mix of main vehicles for battles or conquest scenarios as well as airplanes, tank destroyers and anti-aircraft vehicles is crucial for the successful combat result in these battles.

Tank destroyer Jagdpanzer 4-5 ‘Kanone’ (BR 7.3)
The tank destroyer ‘Kanone’ was once used by the German Bundeswehr and was recently downgraded to the BR 7.3 in WT. Since it is very fast, mobile and flat as well as the one or other hit on its beveled surfaces often rebounds, it is best suited to be used in conquest scenarios from the beginning, in order to quickly reach and occupy these CAPs.
Also, the vehicle can hide in open terrain better than the ‘Maus’, which makes it useful for open ground battles starting from BR 8.0. Medium battle tank Panther II (BR 7.0)

This medium battle tank was recently raised again in WT from BR 6.7 to BR 7.0. The Panther II is very mobile and it is very good after the loss of the ‘Maus’ as another tank with turret, but the ‘heavy chunks’ in the opposing teams must be clearly grab from the flanks.
Also, the ‘Maus’ is not suitable in the high BR starting from 8.0 on open ground, as it is especially for opposing missile tank destroyers or airplanes a not to be overlooked target, where one better accesses this fast and maneuverable tank.

Of course, the Jagdtiger can not be missed in this line. Armed with the same powerful cannon as the ‘Maus’ and outstanding front armor, it is an excellent alternative when the first vehicle has been destroyed, as close to the most favorable tank destroyer (BR minus 1 for 190 points at the beginning). However, it is large, immovable and could easily knocked-out from the side.

The assault tank Sturmpanzer II, armed with the heavy 15 cm infantry gun, was just introduced on the BR 2.3. However, with the use of the explosive (HE) shells, the gun is sufficient to destroy every enemy tank in close combat – even on BR 8.0!
It is also quite mobile, but the heavy gun has only a small horizontal and vertical range and can only be used on shorter distances. But it is cheap to repair (800 SL), so it’s a good choice to be used in practically lost battles, so as not to waste anymore SL (in-game currency ‘Silverlions’). Also, it is in my line in the case of a battle on the optimal BR 7.7 the cheapest tank destroyer (to deploy for 190 points at the beginning) and a kill with it here earns a lot of SL !

The anti-aircraft tank Kugelblitz was recently upgraded in the BR from 6.7 to 7.0, probably because it is very effective against ground vehicles as well as airplanes. That’s why it is no longer the cheapest AA-tank to deploy for this line.

The Coelian anti-aircraft tank was instead lowered from BR 7.0 to BR 6.7, so it is the best AA-tank for this line, which can be deployed in any case for just 150 points. The Coelian has been a 37-mm twin-AA gun on the better armored chassis of the Panzer V Panther, but a lower rate of fire and the shells penetrate less armor.

As the fastest German bomber, whose is now used as best in a dive attack with a powerful 1,000 kg bomb and two 250 kg bombs, is of course also on this BR still the first choice.
The Arado Ar 234 C-3 was the planned successor for the Ar 234 Blitz, which had been used in the last months of WW2 and had only two jet engines, but its strikes also usually flew in the dive attack.

Jet fighter Messerschmitt Me 262 A-1/U4 (BR 6.7)
The Me 262 with the 5 cm gun is the cheapest (by deployment points) and fastest fighter, which can be used on BR 7.7 for already 480 points.
The 5 cm cannon is firing very slowly (a maximum of three to five shots can be given in one approach), but it also penetrates most tanks and can destroy an aircraft with a single hit.
The Me 262 is also suitable to be deployed towards the end of a battle that has already been lost, as the necessary points are often available and it is better to be in the air – for example, in an emergency, just flew above the own airfield with AA-gun protection to wait for the end of the battle – than to be slaughtered as senseless at the spawn point by spawn campers, which also costs additional repair bills.

Note for repairs after the battle

Often not known and also not pointed out by the developer, now the tip, that damaged vehicles are only repaired by the activated vehicle bracket (line) of each nation for free of charge!
So, if you have played on several Battle ratings (BR) and have damaged vehicles everywhere, you should create a special ‘Repair Bracket’, where you can place as many damaged vehicles as you could and leave this one selected before closing the game.
This saves many SL of repairs, especially at low battle ratings, as vehicles will be repaired automatically and free of charge up to the next start of War Thunder (depending on the maximum repair time of the individual vehicles, which increase significantly in the high BR). 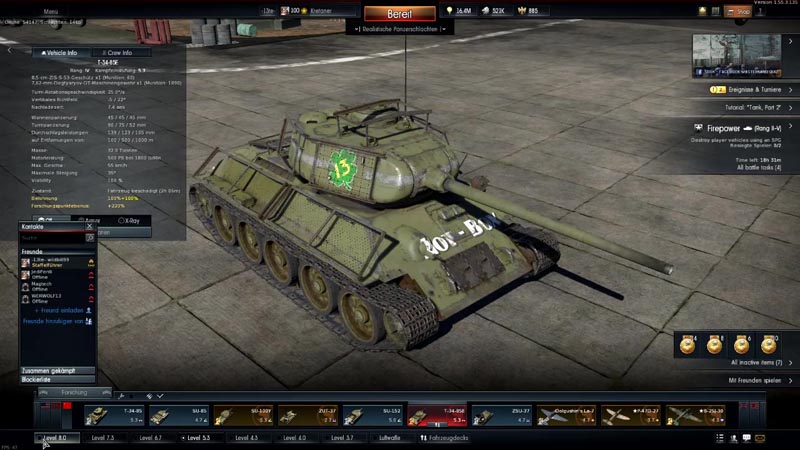 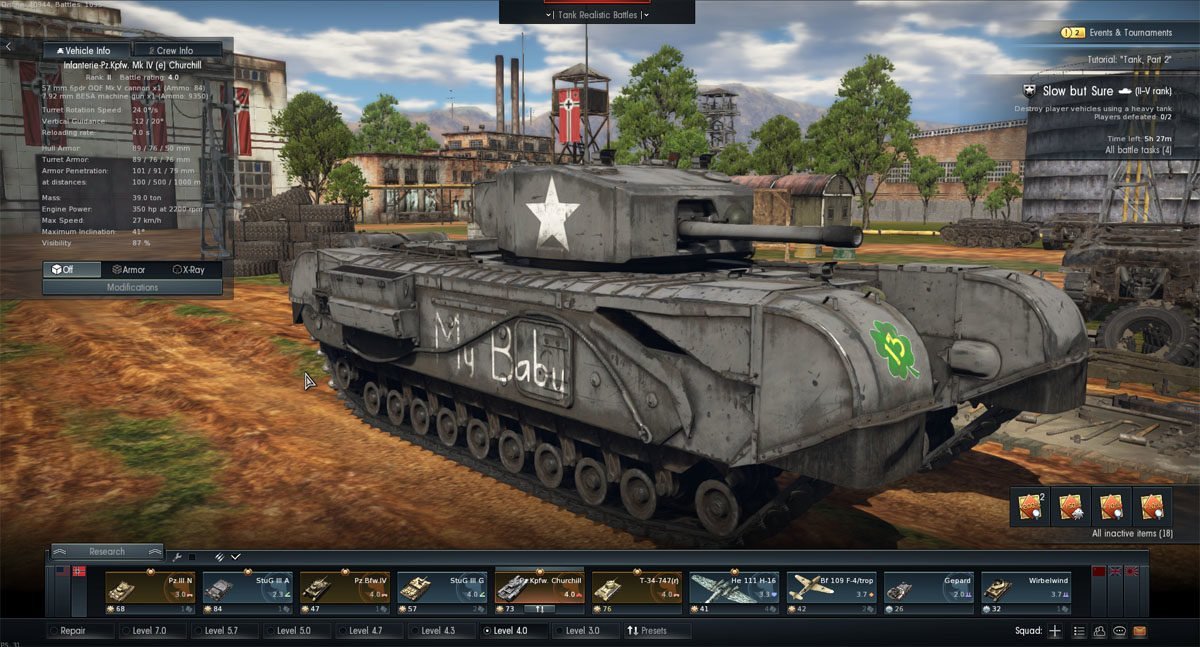 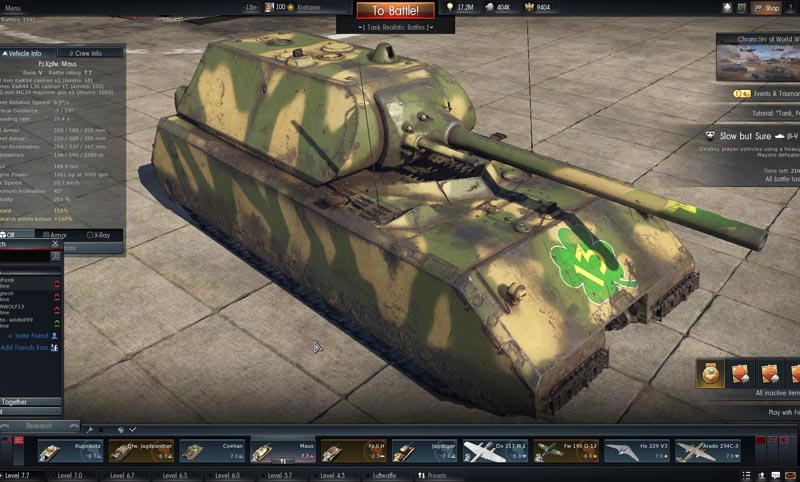 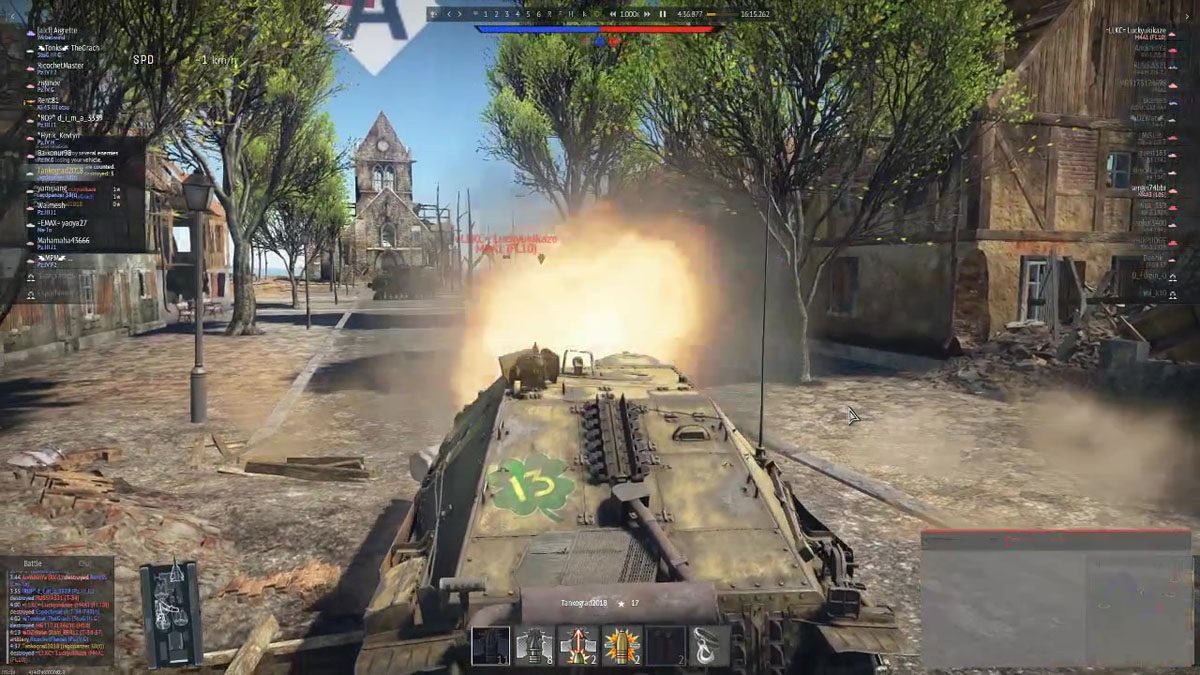 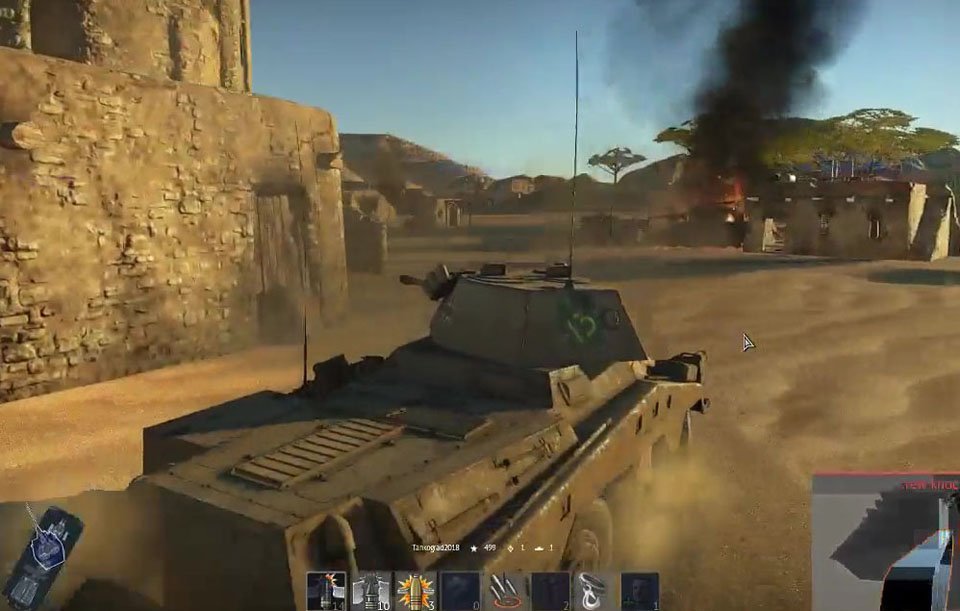 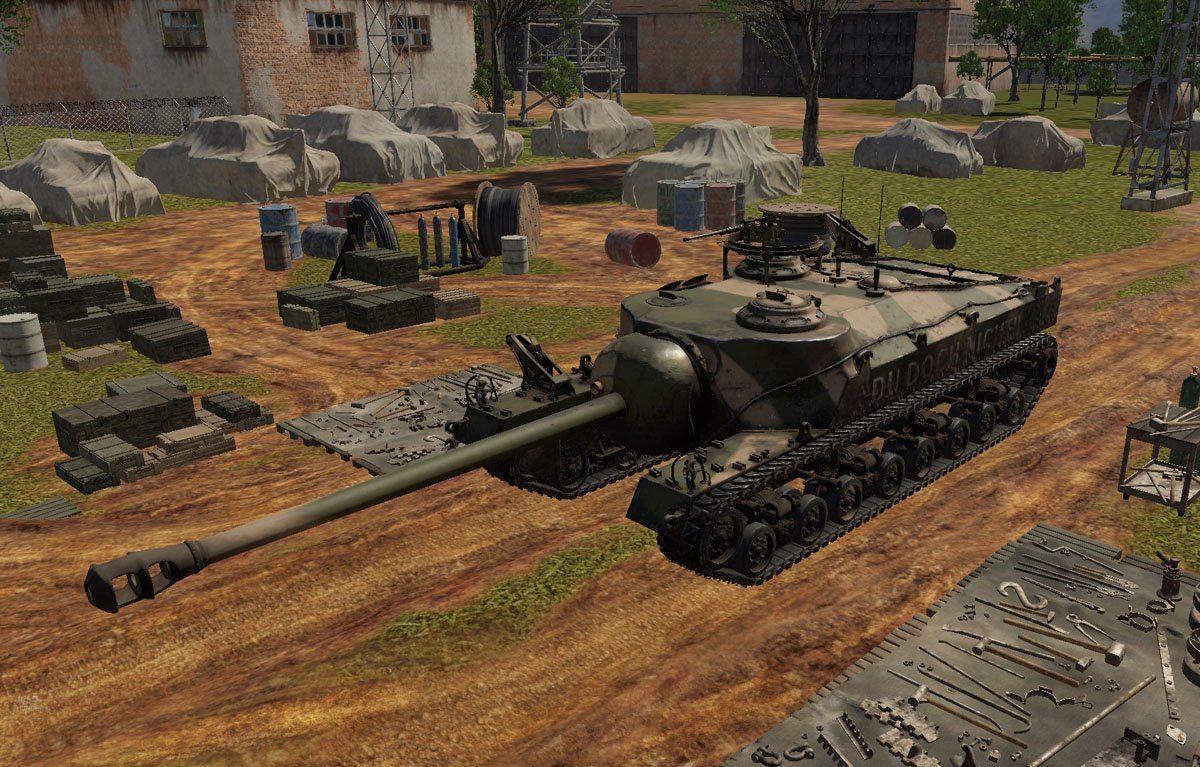 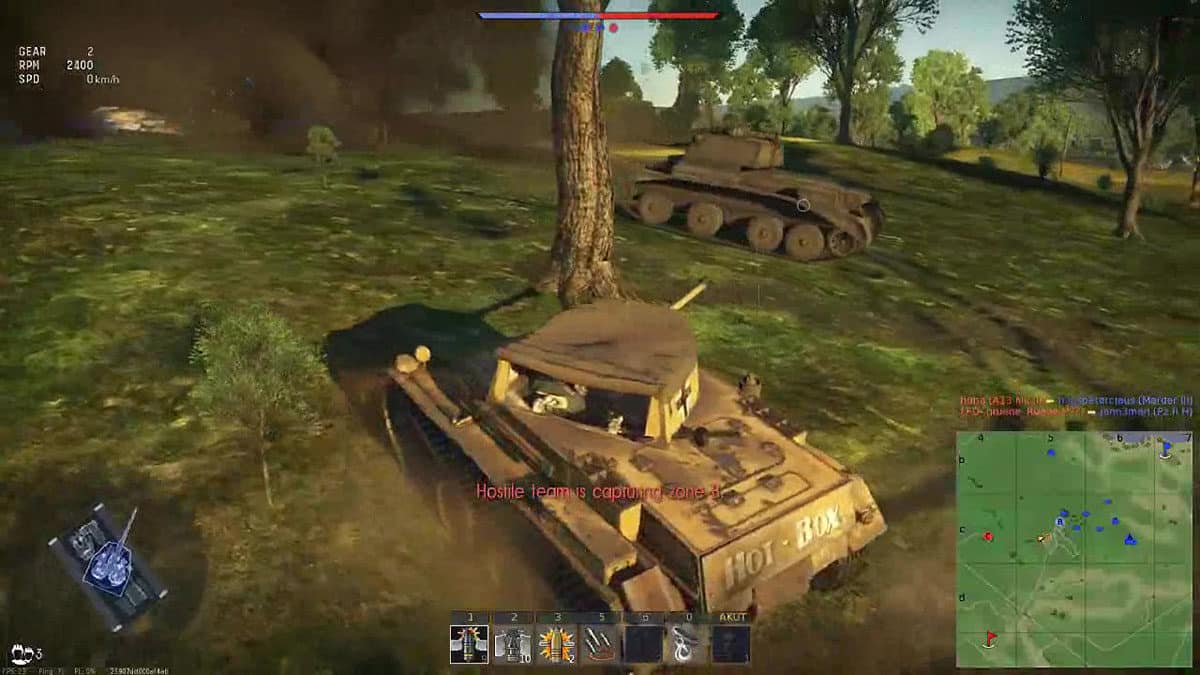 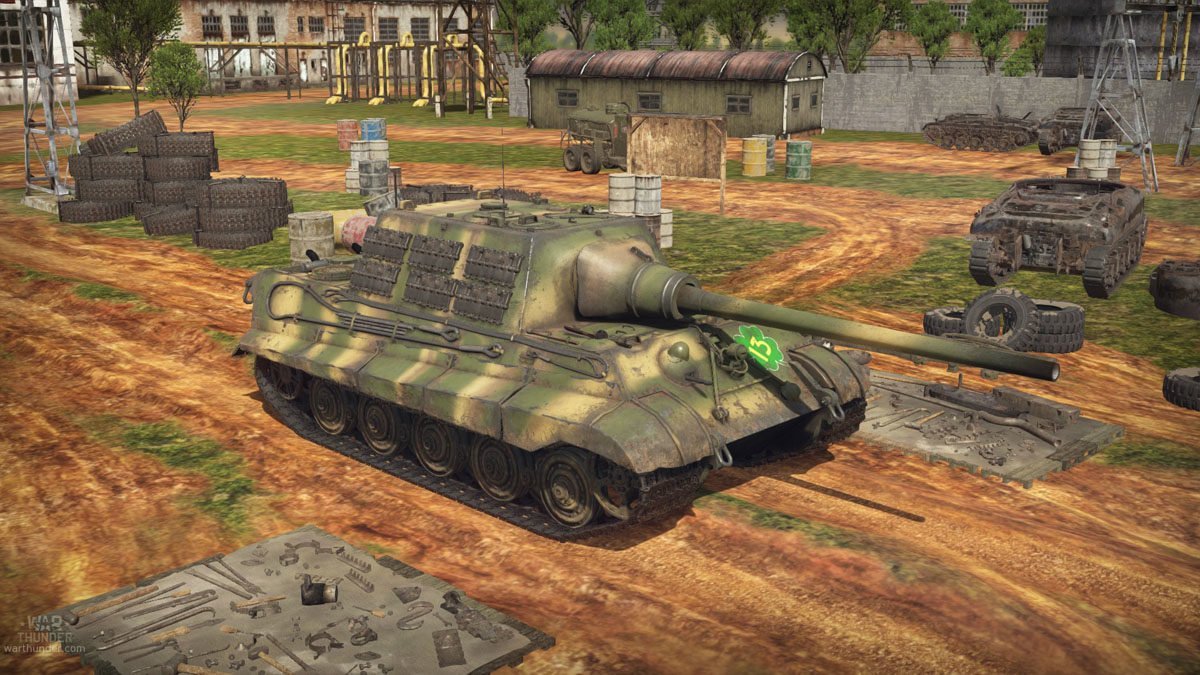 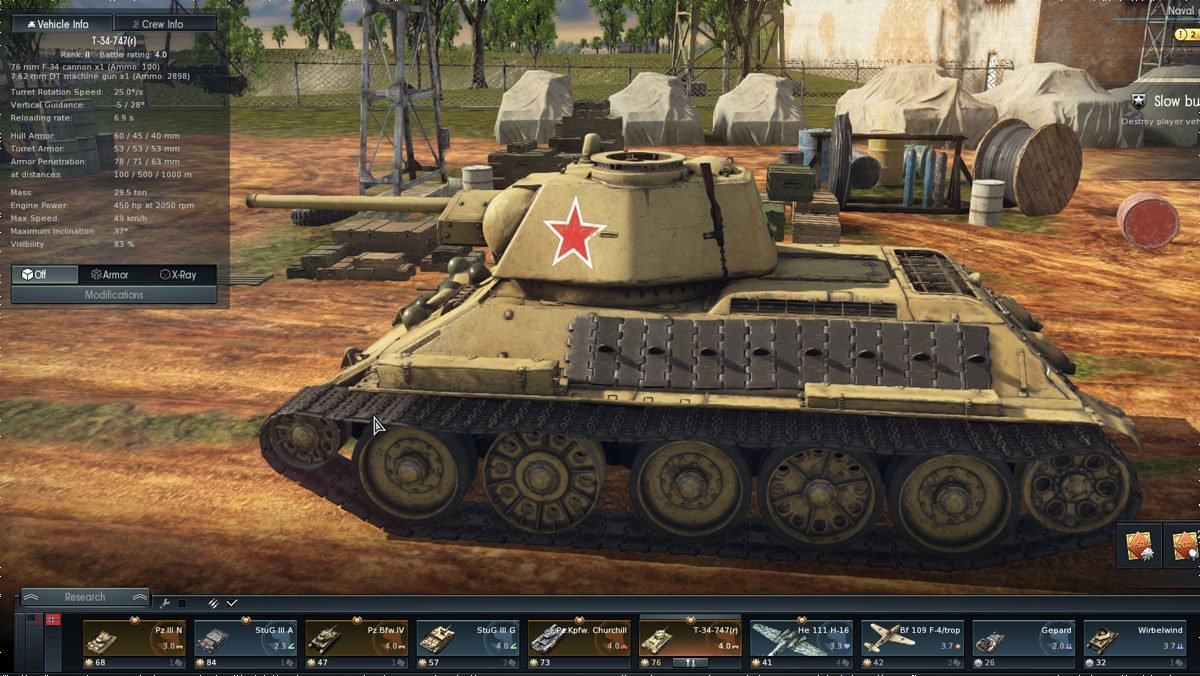 1 thought on “Maus in War Thunder”