The design of the jet fighter Me 262, which had the project number 1065 at Messerschmitt, began a good year before the outbreak of the Second World War and could have regained the Luftwaffe’s control of German airspace from 1943.
Delays in the development and delivery of suitable jet engines, official disinterest on the part of the leadership, damage from Allied air raids, a development program plagued by troublesome difficulties and, last but not least, Hitlers refusal to deploy the aircraft in its originally planned role meant that it took almost six years before the Me 262 ‘Schwalbe’ (Swallow) could finally be used by squadrons of the German Luftwaffe.

A mock-up model of the plane was completed in the second half of 1939. After an assessment by the Reich Aviation Ministry (RLM), the order was placed in spring 1940 to complete three airworthy prototypes. These were all completed in early 1941, long before their jet engines arrived.
But in order to test the basic flight characteristics of the airframe, the Me 262 V1 (PC+UA) was fitted with two dummy jet engines under the wings and a single 700 hp Jumo 210G piston engine in the nose, and made its maiden flight on 18 April 1941.

On March 25, 1942, a little successful trial flight with two BMW 003 jet engines under the wings, but still with the Jumo 210G piston engine mounted in the nose, could be carried out. The first complete flight with jet propulsion took place on 18 July 1942, when the Me 262 V3 (PC+UC) took off under the power of two 800 kg Jumo 004A jet engines.
Many more prototypes were completed to test them with different armament and equipment arrangements. From the V5, which had its maiden flight on 26 June 1943, a three-wheel landing gear was used for the original tail wheel type.

Plans for mass production under highest priority were destroyed by allied air raids on the Messerschmitt factory in Regensburg. This was compounded by numerous problems during the final development phase, including engine fires and engine failure, collapse of the landing gear, jamming of the ammunition supply to the automatic cannons and the breaking of components during flight.

Reliable deliveries of jet engines did not begin until June 1944, which made it possible to deliver the first Me 262A production aircraft.
Despite many difficulties, the first series aircraft were delivered in July 1944. Only 513 Me 262 were taken over by the Luftwaffe in 1944, which was less than 40 percent of the originally planned number. Hitler had already demanded 1,000 fighter-bomber versions of the Me 262 by summer 1944 in order to be able to crush the expected Allied invasion in the West. However, the output did not reach acceptable levels until early 1945.

However, the flight qualities of the Me 262 were excellent and a pre-series of 23 A-0 could already be taken over by the Luftwaffe in spring 1944. These were assigned to the test squadron in Rechlin and the pilot training unit EKdo 262. The latter unit also used the Me 262 in air combat for the first time when a British de Havilland Mosquito reconnaissance bomber, hitherto largely unperturbed, was shot down over Munich on July 25, 1944.

The two main models built were the interceptor Me 262 A-1a Schwalbe (Swallow) and the fighter-bomber Me 262 A-2a Sturmvogel (Petrel). Numerous subtypes of the interceptor were built with four 30 mm MK-108 automatic cannons in the nose or with alternative armament variations. The fighter-bomber was the result of Hitler’s insistence on using the aircraft as a bomber and had substations for one 1,000 kg (1,100 lb) or two 500 kg bombs. 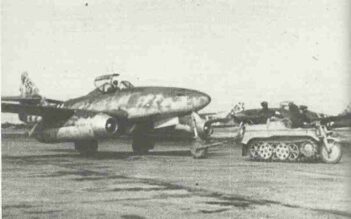 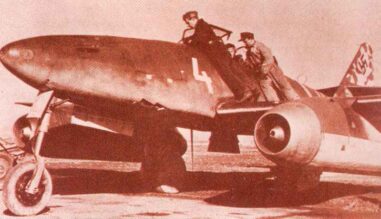 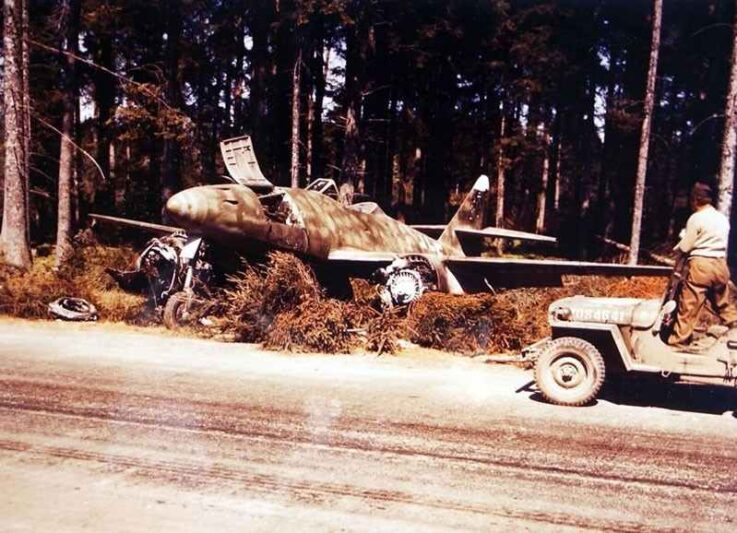 An abandoned Me 262 A2a jet fighter-bomber, found by the US Army in a wood near Frankfurt in the spring of 1945. 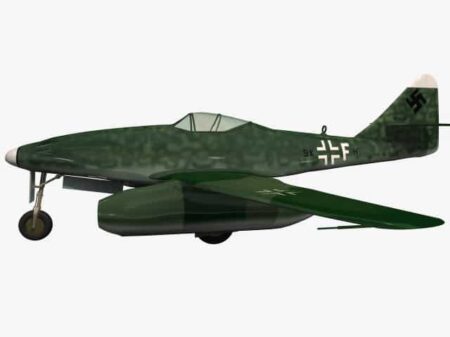 Other versions included the A-1a/V083 with a single 50mm MK5 cannon in the nose, the A-1b with twelve unguided 55mm R4M missiles under each wing, an A-2a/U2 with a glazed nose around an inclined bomb aiming device, the Me 262A-3a ground attack aircraft and the Me 262A-1a/U3 and Me 262A-5a photo reconnaissance aircraft.
A two-seater tandem trainer version was designated Me 262 B-1a and a prototype was completed for the planned two-seater night fighter Me 262B-2a. This had a longer fuselage, larger fuel capacity and the installation of an upward firing Schräge Musik (‘oblique music’) from two MK108 cannons behind the cockpit.

However, the B-2a did not go into serial production, but several of the B-1a training aircraft were converted into night fighters without extended fuselage and designated as Me 262B-1a/U1. These were successfully used by the Welter Command and subsequently under the regular unit designation 10th/NJG 11.
Only a few of the C-models with additional, different rocket engines were completed by the end of the war to improve the jet fighter’s rate of climb.

Even if only about 500 Me 262 had been built by the end of 1944, their number rose to 1,433 by the end of the war. Of these, probably less than 350 – i.e. a maximum of a quarter – saw operations with front units and their losses were also heavy. But only a few of these losses were caused by combat action.

But while the allied fighter planes with jet engines, such as the American Shooting Star or the British de Havilland Vampire, either did not reach the squadrons anymore or did not see any enemy, the about 100 Me 262, which still had fuel, shot down far more than 100 allied bombers and fighters.
The unit with the most air combat victories was the JV44, which destroyed about 50 enemy planes in one month of operation until the end of the war in May 1945.
An air combat between the Messerschmitt Me 262 and Allied jet fighters was not known, but a number of the jets were destroyed by P-51 Mustang, Spitfires, Hawker Tempest and P-47 Thunderbolt, especially during the critical take-offs and landings.