In 1937, Dornier received a basic patent on an aircraft, with two engines installed in the fuselage, each of which was intended to power a tractor and pusher propeller. After a few pilot aircraft (Göppingen Go 9 as a trial aircraft in 1939-40 and Do 231 fighter-bomber in 1941), the radical Do 335 was developed as a response to a specification requirement of the German Luftwaffe in 1942, which demanded an attack/intruder aircraft.

Later, the specification was also extended to fighter and night-fighters, fighter-bomber and reconnaissance aircraft, which led to a delay in the development process for the first time as early as 1943.

Performance of the Do 335

The Do 335 V1 flew for the first time in Oberpfaffenhofen on October 26, 1943, with a 1.800-hp DB603E engine in the nose and another in the rear fuselage section, which powered the pusher propeller.
Then, the Do 335 official tests were carried out in Rechlin and, except for low stability problems due to the length of the aircraft, the reports of the test pilots were mostly positive. In particular the speed, acceleration, turning circle and the good handling of the aircraft surprised most pilots. Thus, the development proceeded quickly and without major concerns.
Although heavy, the Do 335 was powerful and very fast and, for understandable reasons, was the first aircraft to have a standard ejector seat.

Up to the end of the war only 36 or 37 Do 335 could be finished. These included 13 pilot aircraft in the prototype status, 10 pre-production planes of the A-0, 11 A-1 and two A-12 double-seat training aircraft.
Another 70 to 80 Do 335 arrows were in the final production and were waiting for components.

To the difficulties caused by the critical war as well the transport situation there were still constant changes to the priorities for the aircraft.
In November 1943 it was decided to build a fast bomber to attack British cities or ground troops instead of a heavy fighter. In January 1944 a reconnaissance aircraft was called for (since the conventional recon aircraft could no longer bring enlightenment results to the imminent invasion from Britain), in March 1944 the heavy fighter again to ward off the US day bomber attacks.
Three months later, the Do 335 A-1 and A-2 were finally delivered as bomber aircraft. In August 1944 the night-fighter was given the highest priority, on September 26 the heavy fighter again. On October 10 the night-fighter was again desired, of which the first prototype was available on November 15. 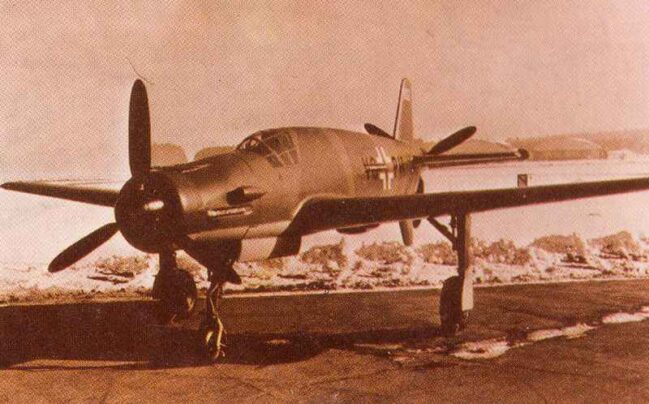 The only Dornier Do335 Arrow in existence is this completely rebuilt exhibit. It was restored by Dornier at Oberpfaffenhofen in 1970. 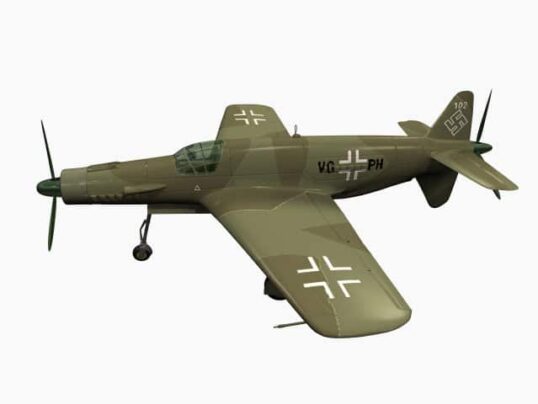 The first armed prototype was the V5, while the V9 was the prototype for the A series and armed with two 15-mm-MG151/15 in the upper fuselage and a 30-mm-MK103 cannon firing through the front spinner.
The first pre-production machine, the Do 335 A-0 followed shortly after mid-1944 and the Erprobungskommando 335 (Trial command 335) was set up in the following September with the first 10 A-0.

No Do 335 saw regular combat missions, even if some A-0 from autumn 1944 from the Erprobungskommando 335 also had to be used in airspace where contact with enemy planes could be happened. Several Allied pilots reported the sighting of the odd-looking plane.

The Allied fighter’ ace’ Pierre meet with the Do 335 Arrow in April 1945. He talks about it, that he was flying in a bunch with 4 Hawker Tempest fighters when he saw a single Do 335 traveling at maximum speed at low-level above the trees. Regardless of his fighter’s great speed at low altitudes, they were unable to intercept or even come close to fire on the Arrow.

Probably the night-fighter version of the Do 335 Pfeil would have become the model with the best combat results.
At the end of 1944, the new Focke-Wulf Ta 152 was prefered as a fighter plane from the Luftwaffe instead of the Do 335. Although the Do 335 was promising as a fighter with an outstanding performance in May 1944, a year later, its advantages compared to the current Allied fighter planes had clearly diminished. As a day fighter, the Do 335 would still have a slightly higher speed than the Ta 152, but was no better at range or flight time. For this the fuel consumption of the Do 335 was much larger and production and repair costs were also much more expensive.

Specifications Dornier Do 335 A-1 Pfeil (Arrow)

Video from the action with Do 335 ‘Arrow’ in video games

Mission with Jagdpanther and Do 335 B-2 (from minute 2:45) in a ‘Realistic Ground Battle’ of the free2play game War Thunder: