Russian heavy Stalin tanks IS 1, IS 2 and IS 3.
History, development, service, specifications, statistics, pictures and 3D-model of Iosef Stalin tanks.

During the summer fighting of 1943, Kotin’s design teams developed several versions of a successor for the heavy KV tank, the new KV-13, experimenting with new suspensions, new hull layouts and new turrets. As an interim step, a KV-1S was up-armed with a 85 mm gun as the KV-1S-85, but this was not accepted for production because the turret was too small to accommodate the gun and its recoil. A new tank design was developed, based on the KV-13 research and named the IS 1 or IS-85 (after Iosef Stalin; K. Voroshilov, after whom the previous KV tank was named, having been in disgrace since the beginning of the war).

This mounted a 85 mm gun, and was as thickly armored as the KV1 Model 1942. However, by redesigning the hull and turret and by introducing transmission and powertrain improvements, the new Stalin tank IS 1 was nearly as mobile as the lightened KV1S. The prototype was displayed to Stalin in August and won considerable admiration from the GKO. Production would take time to initiate, and there was some concern that the IS 1 was only armed with the same gun as the new T-34-85 .
To bridge the gap until IS 1 production began, the NKTP ordered the Kirovskiy Works to build a modest number of KV 1S with the more heavily armed turret of the IS 1 as the KV 85. In September and October 1943, 130 KV 85s were manufactured. The Chelyabinsk team adapted two heavier guns to the IS 1, the BS-3 100mm anti-tank gun and the A-19 122 mm gun, and these were known respectively as the IS-100 and IS-122 heavy tanks.

In November 1943, they were put through firing trials in Kubinka. A captured Panzer V Panther was used as the target and a 122 mm round crashed through the frontal armor and clear through the rear armor as well. However, the 100 mm gun had better armor penetration (185 mm at 1,000 m as compared to 160 mm for the 122 mm gun). But the 122 mm gun was selected because there was a surplus of 122 mm tube production facilities and an adequate ammunition base, while the opposite was true for the 100 mm gun. A few IS1 with 85 mm guns were completed before this decision was made, but with acceptance of the IS-122 for Red Army use by the GKO as the Stalin tank IS 2, the IS 1s were re-gunned before being issued. A total of 102 IS 2s and the prototypes were completed in 1943.

The type was in such great demand after its debut that in April 1944, the NKTP ordered construction of a new assembly facility at Tankograd to increase production. It first saw action with the 11th Guards Heavy Tank Regiment following the Korsun-Shevchenkovskiy battles in the early spring of 1944.
The redesigned hull and layout of the IS 2 gave it better ballistic protection than the KV, and maximum turret armor was an impressive 160 mm. Far more appreciated by its crews was the anti-tank capability of the new gun. It delivered 3.5 times more kinetic energy on impact than the 76 mm round, and even in the rare case where this was not sufficient to penetrate the armor, the force of the impact and explosion of the high explosive filler was usually enough to blow a turret off almost any tank. The most serious disadvantage of the IS 2 was that its small internal size permitted stowage of only 28 rounds of ammunition, and these were of the split type which slowed the rate of fire.

The IS 2 has been compared unfavorably to both the Tiger I and later Royal or King Tiger tank in terms of armor and firepower, though it should be kept in mind that in terms of weight, size and cost, it was much more comparable to the Panther medium tank than to the much larger and heavier Tiger. Indeed, the Germans’ decision to adopt so large, heavy and complex a tank as the Panther for their medium tank was one of the factors which limited German tank production to levels far lower than Soviet production, and helped the Soviets to build up a decisive quantitative advantage in tanks during the final year of the war. 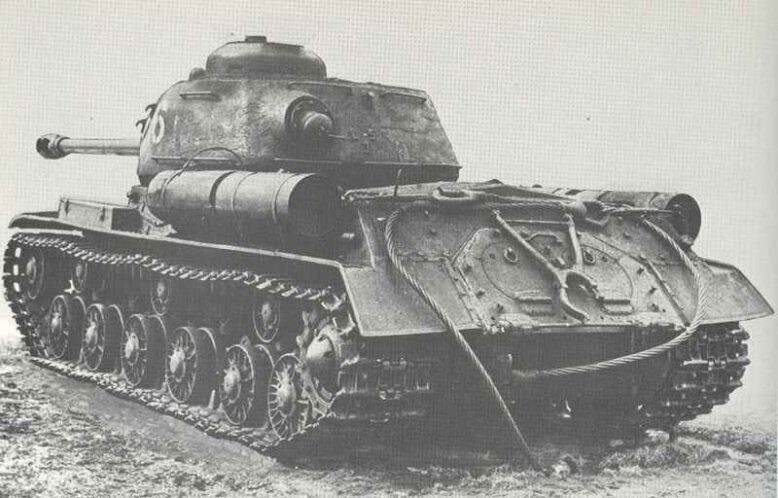 The Stalin tank IS 2 retained the rear turret machine-gun that had characterized Russian heavy tanks throughout WW2. 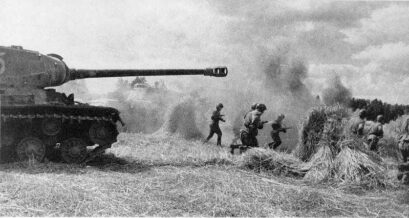 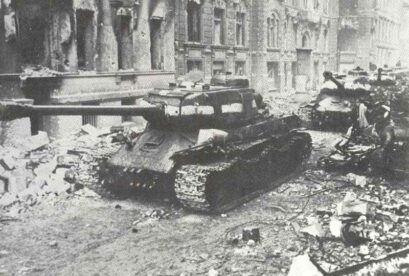 These Iosef Stalin IS 2 of the 85th Heavy Tank Regiment, are patrolling a rubble-street in Berlin. 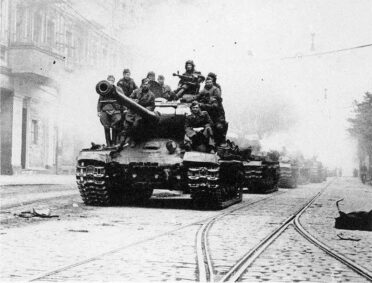 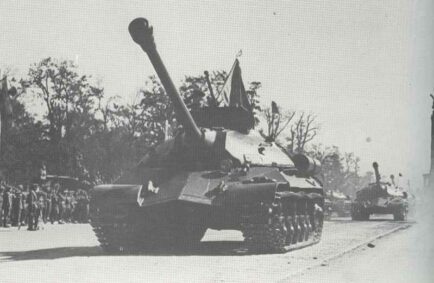 The sleek lines of the Russian Stalin 3 heavy tank strongly influenced world tank design after its initial public appearence in September 1945 in Berlin. A small number of the IS 3 had been in action around Berlin in the spring of 1945. 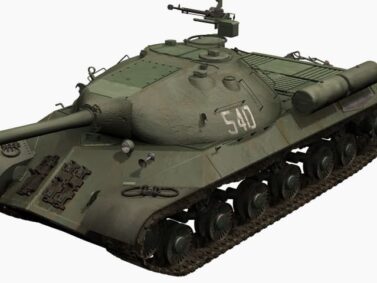 In the spring of 1944, the IS 2 was further improved with the introduction of the IS2m (m: modifikatsirovanniy). Apart from fire control improvements and other internal changes, the main difference was the use of a new, simpler and better angled bow casting. Also, the improved D-25T gun was introduced which was nearly identical with the A-19, but had a drop-breech which speeded loading. A number of experimental versions of the heavy tank were built, with various guns, the most drastic variant being the IS-2E with a new electrical transmission and a new road wheel configuration. None of these were accepted for production. While experiments with the heavy tank were being conducted, TsKB-2 was divided to permit a team under Dukhov to examine a radically re-configured IS 2.

Two versions were proposed: the Stalin 3 tank IS 3, with a new hemispherical turret, and the IS 4, with a longer hull and thicker armor. The IS 3 project continued and a prototype was completed in November 1944. It had extremely thick and heavily rounded turret armor, a heavily sloped bow, and a peculiar side hull construction with large stowage bins over the tracks which offered stand-off protection against the shaped charges of new infantry anti-tank weapons such as the German Panzerfaust. With the prospects of victory, so sanguine, the GKO allowed the Red Army the luxury of a second heavy tank type. About 350 IS 3s were produced up to the end of the war in Europe and about 250 IS 4s were built later.
Production of the IS 3 was concurrent with the IS 2m. The IS 3 saw limited action during the final weeks of the war in Germany, and was quickly nicknamed Shchuka (Pike) after its pointed bow. Automotively, the IS 3 and IS 2m were virtually identical, and they also shared the same gun and fire controls. The suspension was based on the same components, and only the armor layout was different.

Penetration mm at 0° armor plates of the main gun: