In 1933 the Weapons Office of the Reichswehr issued a requirement for a lightly armored vehicle with a weight of approx. 5 tons, which was suitable for training future tank crews and for testing operational tactics. Between February and April 1934 five companies built each three prototypes without superstructure and turret, which were called Landwirtschaftlicher Schlepper (‘agricultural tractors’) for reasons of secrecy.
After testing by the Weapons Office, the Krupp design was selected for further development, with the company responsible for the chassis and Daimler-Benz for the superstructure. The 15 PzKpfw I Ausf. A ohne Aufbau (Panzer IA without superstructure) were then used as driving school vehicles at tank schools.

The first 150 series vehicles were built by Henschel. This series from July 1934 under the designation PzKpfw I(MG) (SdKfz 101) Ausf A and was driven by a 57 HP Krupp M305 petrol engine.
Altogether 818 of these vehicles were completed by June 1936 by the companies Krupp, Henschel, MAN, Krupp-Gurson and Daimler-Benz.

The small two-man tank was hardly sufficient even for the less demanding specifications of the time. The hull was only lightly armored and also had many openings, joints and corners that were sensitive to fire.
The weak engine allowed only a moderate movement and the commercial gearbox had five forward and one reverse gear. In addition, the equipment was economical and the crew had little comfort.

The drive was similar to the Carden-Loyd from the twenties. The drive wheel was at the front, which meant that the force had to be transmitted via a chain through the entire hull to the front to a differential at the driver’s feet.

Driver and commander were in the same room. The driver reached it through a flap on the side, while the commander entered through the large tower hatch. Since the commander’s visibility was very poor when the vehicle was completely closed, he usually stood in the open turret, leaving his upper body unprotected.

The small turret was swiveled by hand and was located right offset in the middle of the vehicle. The commander also operated the two 7.92 mm machine guns in the turret, for which a total of 2,250 rounds of ammunition were carried. The driver sat to the left of the turret. 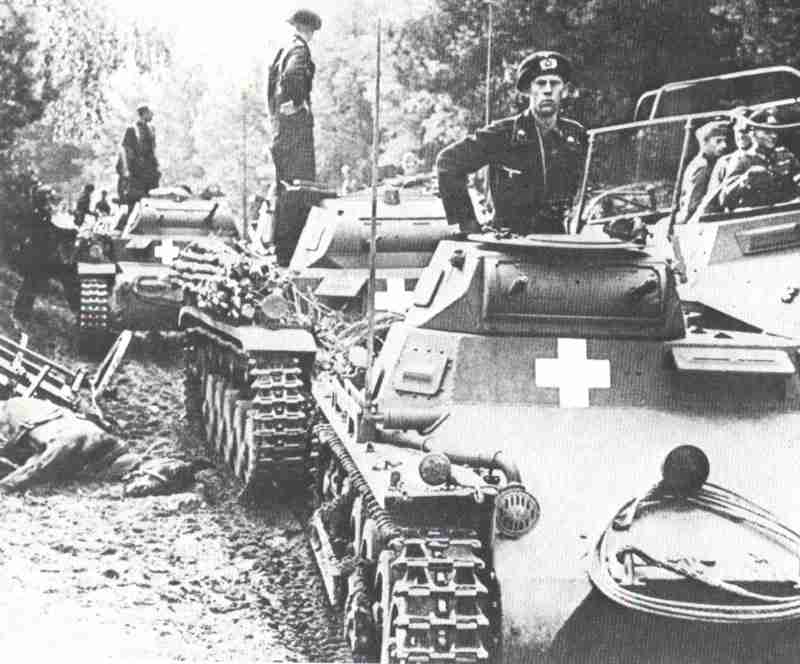 German Panzer Division after the first border fights on September 1, 1939. In front a Panzer I, followed by Panzer II tanks. 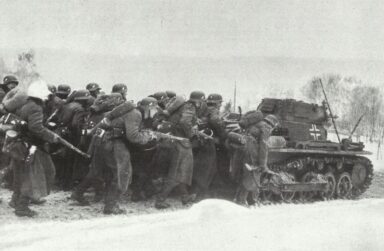 Under the cover of a Panzer I German infantry is advancing against a Norwegian village. 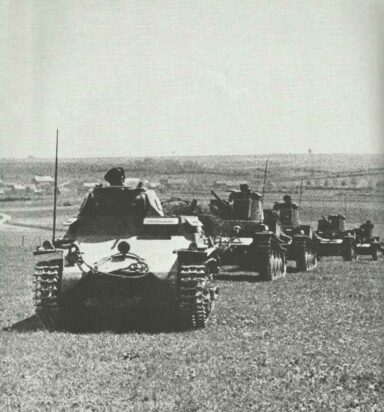 A Panzer I leads Panzer 38(t) into Northern France. 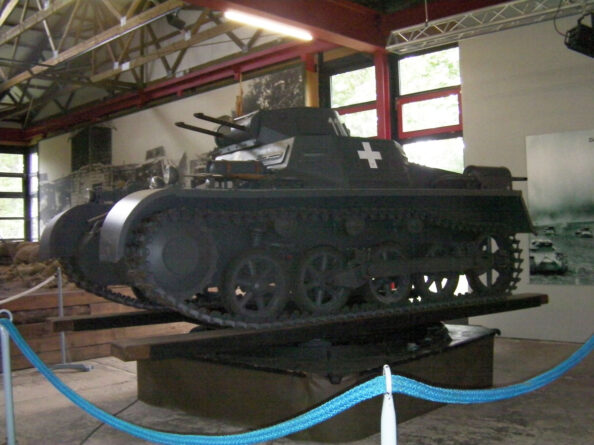 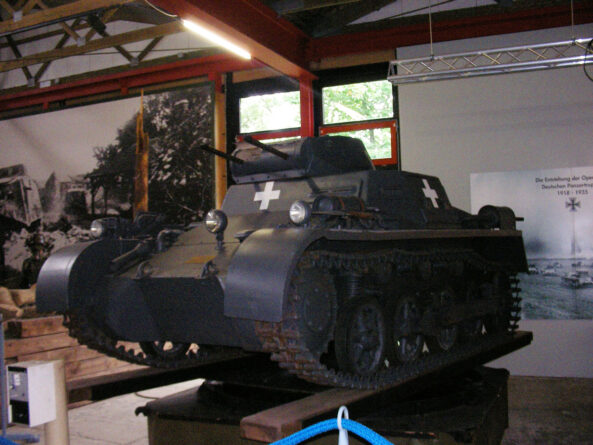 But the engine was too weak and caused problems, so the PzKpfw I Ausf B got the stronger 6-cylinder Maybach NL38TR with 100 HP. This meant that the hull had to be extended by 16.93in (43 cm) and an additional wheel had to be fitted on each side.
Although this model was a bit heavier, the more powerful engine gave it a maximum road speed of 25 mph (40 km/hr). The armor and armament were still too weak, but nothing changed.
Most of this altogether 675 delivered vehicles of the Ausf B were built from August 1935 to June 1937 by Henschel, however also the companies MAN, Daimler-Benz, Krupp-Gruson and Wegmann were involved. A number of these vehicles were also retrofitted with radio, while the other tank commanders had to communicate by hand signal.

Additionally, the PzKpfw I Ausf B ohne Aufbau (‘without superstructure’) was built from 1936 to November 1938. These 164 vehicles served as recovery and repair tanks until 1941.
Thousands of German tank crews learned on the small PzKpfw I the handling, repair and tactics of battle tanks.

The Kleine Befehlspanzerwagen (light armored tracked command vehicle; SdKfz 265) was built on the basis of the PzKpfw I Ausf A from 1935 to 1937. A total of 184 of these command tanks were deployed by the Panzer troops until the turn of the year 1940-1941.

The Panzer I was first used in the Spanish Civil War and was the most common German tank with 1,445 vehicles at the beginning of the Polish campaign in September 1939. Here the light tank could only survive because no army had a sufficient number of effective anti-tank weapons at this time and its armor and armament against infantry was sufficient.

It had already become clear, however, that the vehicle was unsuitable for front operations, mainly because of the lack of firepower and too light armor from only 7 to 13 mm.
During the Western campaign in May 1940, however, there were still 523 in service with the front troops, while others were still in service in Norway, with the occupation troops in Poland or used for training in Germany. However, already during the fights for Dunkirk many of the Panzer I were destroyed by British 2-pounder anti-tank guns.

Even at the beginning of Operation Barbarossa in June 1941, some of them were still in use with the front troops, before they were withdrawn from the end of 1941.
The light armored tracked command vehicle was still used by higher staffs until the end of 1942 and the Panzer I finally disappeared in 1943 from secondary duties with occupation troops or fighting Partisans.

After the light tank became obsolete, its chassis was used for a number of other tasks. The first of these was the conversion to an ammunition tractor for tank units when 51 units were converted in September 1939.
The heaviest conversion, however, was the conversion to an artillery self-propelled gun with the 15-cm infantry gun sIG33, 38 of which were completed in February 1940. However, the chassis was already too much overloaded.

For the Panzerjaeger (anti-tank units) 202 PzKpfw I Ausf B were converted from March 1940 to February 1941 as self-propelled guns with the Czech 4,7-cm anti-tank gun. These vehicles were used until the end of 1943 both at the Eastern Front and in North Africa. However, the 4.7-cm anti-tank gun was soon no longer sufficient for the modern Soviet tanks.

Finally, between July and December 1942, the PzKpfw I Ausf C was built with up to 30 mm thick armor and a slightly reinforced armament consisting of a heavy 14.1 mm MG and a 7.92 mm MG34. This vehicle was intended as a reconnaissance tank and had a top speed of 48 mph (79 km/hr) on the road. At the time of the Allied invasion of Normandy, the majority of these 40 reconnaissance tanks were with reserve units in France.

Between April and December 1942, 30 infantry assault tanks PzKpfw I Ausf F with the largest possible armor of 80 mm and the usual two 7.92 mm machine guns were also built. Eight of these were used by the 1st Panzer Division in Russia in the summer of 1943.

Finally, conversions to explosive layers, bridge layers, flame throwers and ammunition tow tractors were made from the available, outdated PzKpfw I.

Panzerkampfwagen I Ausf A (SdKfz 101)

Originally called the MG armored car (VsKfz 617), the ΡzKpfw Ι Ausf Α was the first German tank to be built in mass production. A first order for 135 of the light tanks was placed with Krupp in January 1934 and quickly increased by another 450 vehicles.

The PzKpfw I Ausf Α had the same hull and suspension as the ‘Ausf A ohne Aufbau’ (without superstructure). The superstructure was mounted above the tracks and a turret offset to the right was mounted on it.
This allowed space for the driver’s access hatch on the left side and the roof over the hull.
Both machine guns were mounted coaxially at the front of the turret in an inner, movable gun casing.
Although there were only two crew members, there were five vision ports in the hull and six in the turret.

The original design did not have adequate ventilation, so the air-cooled engine could overheat. To solve this problem, a kind of ‘air shovel’ with a ventilation grille at the rear end was fitted to remove the hot air.

The first completed PzKpfw I Ausf A was delivered in September 1934. By July 1935 the Kraftfahrlehrkommando (motor driving instructor command) had received 475 units. A total of 818 PzKpfw I Ausf A were built between July 1934 and June 1936.

Since the new tank units were formed from the cadres of the older units and these took their PzKpfw I Ausf A with them as training vehicles, the Ausf A was distributed over all tank units at the beginning of the war.
The vehicles were used extensively in Poland and France and were also used by the Pz.Abt.40, which participated in the invasion of Denmark and Norway.
From the end of 1940 to 1941 the tanks of the Ausf A were withdrawn from most units, which were in combat zones. Their last combat operation at the front took place in 1941 in Finland and North Africa.

Panzerkampfwagen I Ausf B (SdKfz 101)

When the PzKpfw I Ausf A proved to be underpowered and its engine overheated, the turret and superstructure were mounted on the longer chassis, which was intended for the ‘Kleiner Panzerbefehlswagen’ (light armored tracked command vehicle; SdKfz 265).
The Ausf B had thus a longer chassis than the Ausf A, after the chassis developed for the ‘Kleiner Panzerbefehlswagen’ was taken over.

The suspension was modified and now had five road wheels, four return rollers and the idler wheel was raised so that it was no longer used as a road wheel.
The rear area was also redesigned with fins that improved the supply and exhaust air for the water-cooled engine and radiator. The turret and superstructure were identical to the tanks of the Ausf A and 675 PzKpfw I Ausf B were built between August 1935 and June 1937.

The PzKpfw I Ausf B was issued to all existing tank units from 1935 to 1940. From the second half of 1940 to the beginning of 1941 they were withdrawn and when Operation Barbarossa against Soviet Russia started in June 1941, there were only 74 units left in the tank regiments on the Eastern Front.

The Ausf B was, however, used as an armored vehicle for the company and battalion commanders of the Panzerjaeger (tank hunter) detachments with self-propelled guns. By the end of 1943, however, the commanders of these units had submitted a complaint that the PzKpfw I Ausf B were completely inadequate as command vehicles.

Penetration mm at 30° armor plates of the machine gun:

Service statistics of all Panzer I variants: