The tracked demolition charge had their origin in the Borgward B I mine clearing vehicle (SdKfz 300), which was developed in 1939 by the company of the same name for this very task.
The vehicle was remote controlled and pulled demining rollers behind it. It was cheaply constructed and therefore dispensable in case of loss. 50 pieces of it were produced until May 1940.

In 1940 another 100 units of the Borgward B II, which was a larger vehicle with a six-cylinder engine, were ordered. However, only the prototype of the B II was completed and both models were subsequently replaced by the Goliath, which was remote controlled by wire cables.
In addition, another, only experimental amphibious vehicle called ‘Ente’ (‘Duck’) was based on the B II.

Only experimental field tests were made with the vehicles, none saw a front line use.

At the end of 1940, trials with the remote-controlled Borgward B I and B II demining vehicle (Sd Kfz 300) led to an order for a similar small vehicle that would carry an explosive charge and also used for other tasks, such as clearing minefields, but also detoxifying terrain contaminated by war gases.

The first prototype had four large wheels and a tracked undercarriage based on the B II. However, the production model had smaller wheels, which allowed space for battery mounts on both sides and more room for the explosive charge.
Since at that time radio controls, as previously used in the B I demining vehicle, still required the use of bulky and fragile tubes, the control commands were now issued via a three-strand wire cable up to 1,000 meters long, which was usually quite sufficient.

The electric motor version of the Goliath can be recognized by the flat top plate, three deflection rollers and the disc-shaped idler. The hull had three chambers, separated by transverse bulkheads the explosive charge to the front, the control unit in the middle and the pulley with the control cable at the rear.
The 12-volt batteries and the separate electric motor for each of the tracks were located in brackets on each side.

2,650 of the vehicles were built between April 1942 and January 1944. The first units with the small vehicle in service were the Panzer pioneer companies (Goliath) 811 to 815, which belonged to the army pioneer battalion (mot) zbV 600 (Taifun). At the beginning of the Battle of Kursk the small tanks successfully removed minefields and roadblocks for the attack of the Ferdinand tank destroyers of the 654th heavy tank destroyer unit. 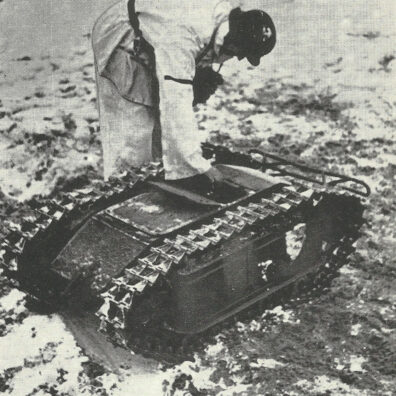 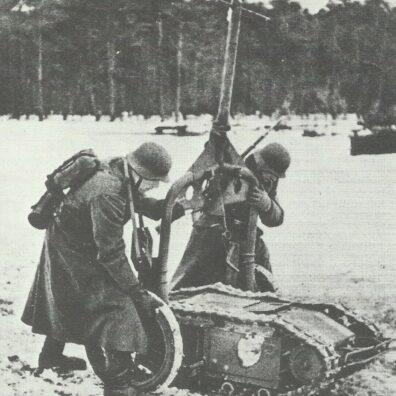 Goliath being manhandled with the aid of the two-wheeled trailer 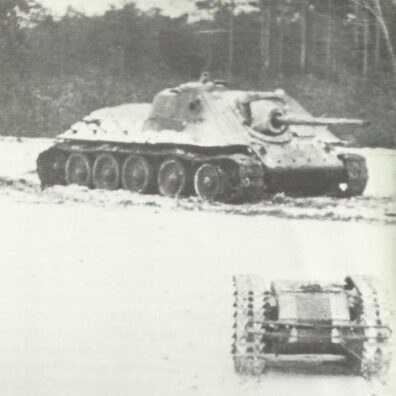 Simulated attack with a remote controlled Goliath demolition tank on one of the newly introduced Soviet SU-85 tank destroyers.

In 1942, the Zündapp company in Nuremberg was ordered also to start production of the Goliath. There, however, the vehicle was based on the company’s own air-cooled two-cylinder two-stroke engine for motorcycles with 700 cc and 12.5 hp. This made it possible to transport a larger payload over a greater distance.
The vehicle was controlled by rolling a heavy field cable behind it with a length of around 650 meters and two versions of the SdKfz 303 were built. The initial version SdKfz 303a carried an explosive charge weighing 165 lb (75 kg) and with a length of 5.3 ft (1.62 m), a width of 2.75 ft (0.84 m) and a height of 1.97 ft (0.60 m) was somewhat narrower and with a weight of 773 lb (350 kg) lighter than the final model.

A raised air intake cowl on the top of the hull, a spoked idler and two return rollers marked the Goliath with V-engine.
The speed could be set to either 3.6 mph (6 km/hr) or 6.2 mph (10 km/hr).

Between April 1943 and September 1944, 4,604 units of the Goliath with petrol engine were built. From November 1944 to January 1945 another 325 modified vehicles were delivered.
About two thirds of these were manufactured by Zündapp, the rest by the Rino and Zacherttz companies.
The Goliath was the main equipment of no less than six tank pioneer companies.

The small tank became quite popular with the German public, as it was included in the ‘Wunderwaffen’ propaganda in the last year of the war. However, the propaganda here clearly surpassed the effects of a special pioneer device in combat. 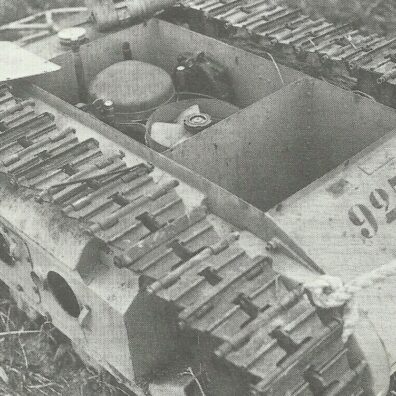 Inside the Goliath: the petrol engine in the back and the front compartment for the expolsive charge 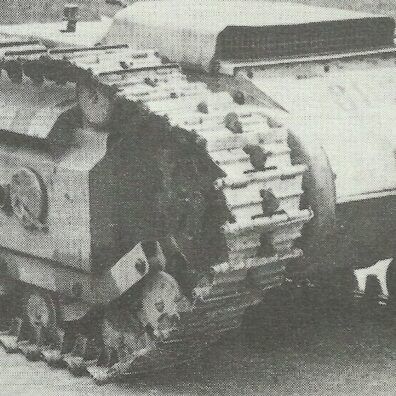 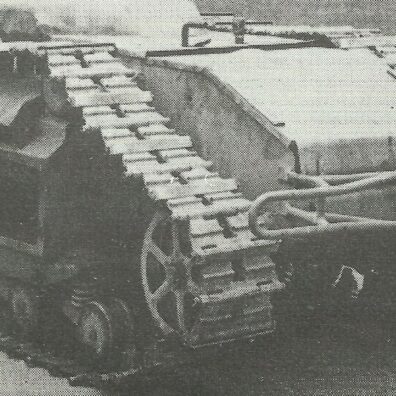 The heavy tracked demolition charge layer was designed to transport an even heavier explosive charge than the Goliath to a specific target by radio remote control. There the load was lowered and the vehicle drove back before the charge was detonated.
For the final phase of the mission, the B IV could be fully radio-controlled. The range of the radio equipment depended on the environmental conditions and was about 1.25 miles (ca. 2 kilometers). Since the vehicle had to be observed for the control, this was completely sufficient.

The vehicle was intended for the destruction of minefields, fortifications and bunkers as well as for the detoxification of areas where chemical warfare ammunition were used. For mine detection, an ordinary mine detector was installed at the front, which transmitted messages about mines by radio to the control center. However, mine clearance then had to be carried out by pioneers or by other means. There is no experience with the vehicle in the removal of chemical warfare remains, as these were never used during the Second World War.
In addition, there was an unmanned reconnaissance tank that could listen in and also take pictures.

This operational procedures were first tested during the Western campaign in France in 1940 with modified Panzer I.

Therefore, the company Borgward was commissioned in October 1941 to develop a special vehicle with radio remote control for such operations. For this purpose the chassis of the ammunition transporter Borgward VK 301 was used, which in the meantime was too small and too little armored to be used for its original tasks.
But the chassis was light and manoeuvrable and had also enough space for the large radio equipment, which was necessary for the use as a radio tank.
The first 12 test vehicles were built in April 1942 and afterwards 616 units of version A were produced from May 1942 to June 1943.

The tracked demolition charge layer B IV was issued to the Panzer companies (Funklenk [radio control]) 311, 312, 313 and 314 and to the Panzer detachments (Funklenk) 301 and 302.
In July 1943 the 312th Panzer company (Funklenk), which was under the command of Army Group Center, successfully used its Funklenkpanzer B IV to clear minefields during the Battle of Kursk.

In December 1943 the Ausf C of the radio-operated tank was introduced. It was characterized by a reinforced armor protection and simplified construction. The construction was simpler with a smaller number of individual armor plates. The driver’s seat was moved to the left side of the vehicle.
To increase the power of this heavier version, a larger engine had to be used, which in turn increased the overall length.
From the C version 305 radio-controlled tanks were produced from December 1943 to September 1944. 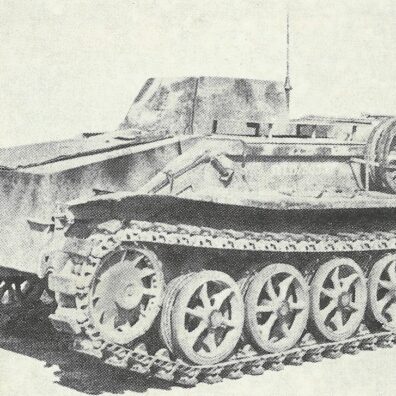 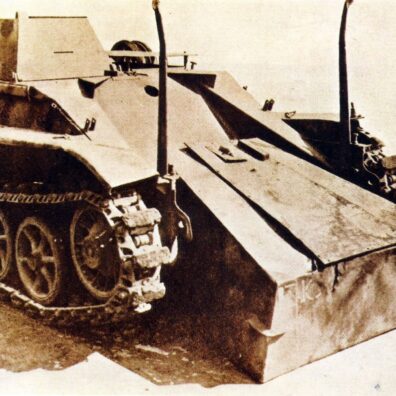 Placing of the explosive charge at the target from a SdKfz 301 Ausf A. 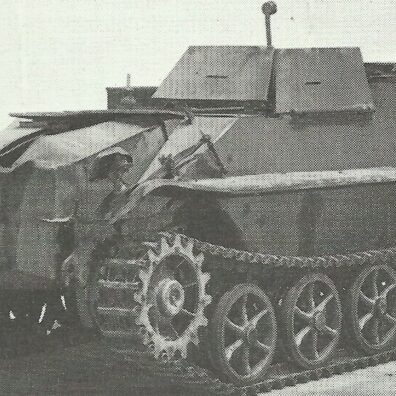 The radio-controlled tank could carry an explosive charge of up to 1,100 lb (500 kg). However, one of the biggest disadvantages of the vehicle was that it was often difficult for the operating personnel to see the target from a safe distance. Attempts were therefore made to improve visibility by using a television camera mounted on the front of the vehicle. However, until production of the B IV was discontinued, these experiments did not yield satisfactory results.
Towards the end of the war, a number of B IVs were converted to small self-propelled guns with a rocket launcher and PzB54 missiles.

In August and September 1944, twenty-one Tiger tanks Ausf E were assigned to the 301st Panzer detachment instead of the previously used Sturmgeschuetz 40, to control their radio-controlled B IV tanks.
Each platoon had one Tiger for the platoon leader and three Tigers, each controlling three B IV. An SdKfz 251 infantry fighting vehicle was attached to the platoon to transport additional explosive charges and replacement crews.

A total of about 10 Panzer companies equipped with radio-operated tanks were deployed. Nevertheless, the use of the armored radio-operated vehicles was relatively rare, so that there are only few reports about them.
All carriers brought greater success on the battlefield now and then, but since practically only stationary targets could be attacked, these opportunities were rather rare in modern mobile warfare.

The Springer (‘knight’ as from Chess games) was ordered as a replacement for the light Goliath and the heavy B IV, as it was more effective than the former and cheaper than the latter, which was to be taken out of production in 1944.
The production facilities for the NSU Kettenkrad (small half-track motorcycle) were to be used for the Springer. The Springer therefore also used the drive train, engine and parts of the Kettenkrad’s running gear.
It was also planned to use this vehicle as a chassis for the small tank Wanze (‘Bug’), which was not completed before the end of the war and was to be armed with a recoilless 10.5 cm cannon.

The Springer was assigned to the ordinary radio-guided tank companies, which used the Assault Gun 40 to drive the demolition charge vehicle into the target area by remote control. Each platoon had a command StuG 40 and three additional assault guns, each of which controlled three Springer.

50 Springer vehicles were completed between October 1944 and February 1945. 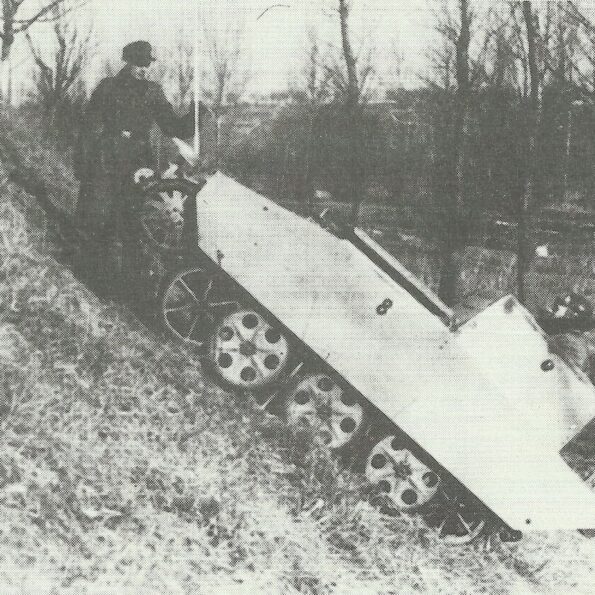 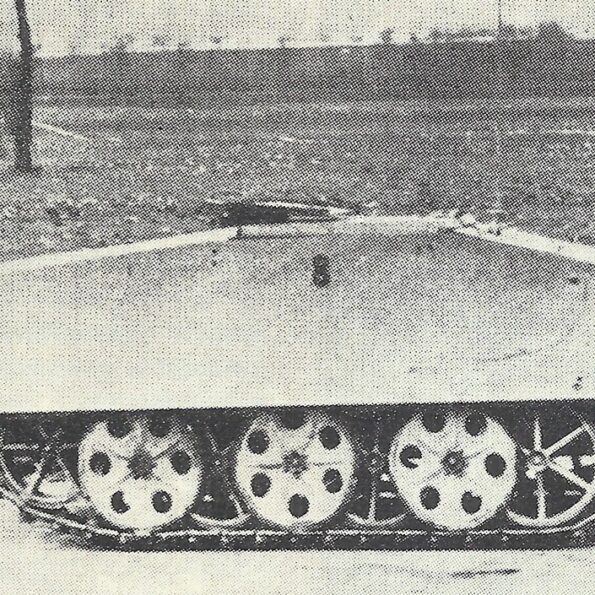 ‘Springer’ with turret folded down and without driver, how he should drive to his destination by remote control.