At the outbreak of World War II in September 1939, the prevailing opinion in the British War Office was that the conditions on a new Western front would be very similar to those from 1914 to 1918. Hence, the need for a heavy infantry tank which would be invulnerable to the existing anti-tank weapons, with a very large trench-crossing capability, and capable of passing through a funnel field stirred up by artillery fire, arose. This specification was referred to as the A20 by the Chairman of Tank Procurement. Woolwich and Harland&Wolff was asked to build a pilot model. An 80 mm armor, a speed of 15 mph (25 km/hr), a climbing ability of 5 feet (1.50 meters) and a crew of 7 men were required as further characteristics.

Essentially the A20 was a refinement of the ‘lozenge’ shape tanks (Mk I to V) built by the British in 1916-1918. Various weapon combinations were considered, including the 2- and 6-pounder, French 75-mm cannon and 3-inch howitzer. Finally, the 2-pounders were selected for the turret and another one was to be installed at the front. In addition, machine guns at the hull sides and the front. Four prototypes were ordered in February 1940. The first prototype began testing in June 1940 and was plagued by gearbox problems. The results of the tests showed, however, that in order to maintain the required performance, the armament had to be reduced to a single 2-pounder cannon.

The whole thing coincided with the evacuation of Dunkirk, after which the UK had less than 100 tanks left to defend its island. The company Vauxhall (the British branch of the US company GMC) was therefore asked to revise the design of the A20, reduce it slightly and put it into production as quickly as possible – if possible within a year.

Vauxhall was chosen mainly because its Vauxhall-Bedford twin 6-cylinder engine was intended for the A20. The A20 prototype and plans were passed on to Vauxhall, additional draftsmen were provided by the British Mechanisation Board and a new pilot model – called the A22 Infantry Tank Mark IV – was completed in November 1940.

The first 14 production models were delivered in June 1941, from an order of 500 tanks directly from the drawing board.
Because of the rushed development program there were numerous construction defects, which led to frequent breakdowns with the first Marks. This necessitated substantial revision programs 1942-1943 carried out by Vauxhall technicians on the units equipped with the new tank. There were numerous improvements in the details of mechanical components.

The Churchill was a composite structure consisting of a 1/2 inch (1.2 cm) soft steel inner skin with an outer skin of armor plates screwed or riveted in place. Initially a cast turret was used, but later models had larger turrets which were cast, welded and composite. The engine and drive were located in the rear. The tracks with the small spring-loaded rollers at the top and bottom provided storage space for ammunition, supplies and luggage between the upper and lower tracks. This made the Churchill an unusually spacious combat vehicle. Crew emergency exits were fitted on each side. Power was transmitted by the new Merrit-Brown four-speed transmission with controlled differential steering, making the Churchill the first British tank with such equipment.

The Mark I was armed with the 2-pounder cannon and a 3-inch (76 mm) howitzer in the front hull. However, changing tactical requirements led to a constant change in armament during the production period. Together with the British cruiser tanks, the 6-pounder cannon was introduced in 1942, necessitating a larger turret (Mark III).
The Churchill tank was first used during the failed landing of Dieppe in August 1942.

The experience of the 1941-42 desert war led the British War Office to believe that speed and reliability were more important than strong armor. So it was decided to phase out Churchill production in 1943 when the new A27 Cromwell cruiser tanks would be available. 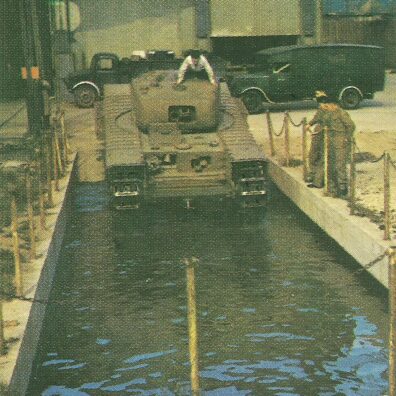 Water trials with a Churchill 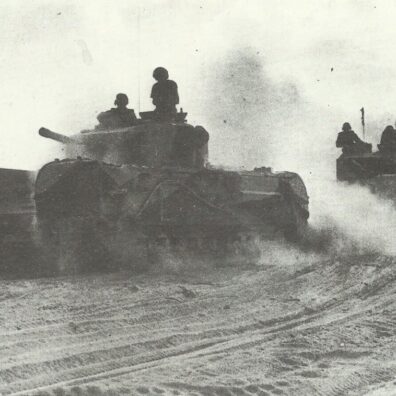 Two of the six Churchill tanks at Second Alamein. 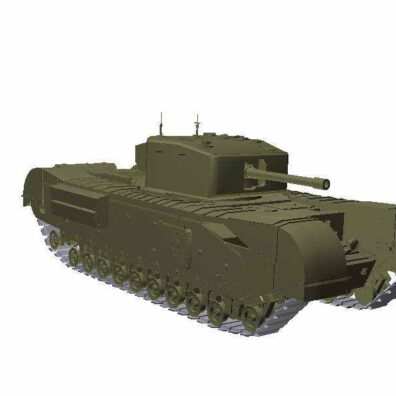 However, Churchill’s first combat missions with the British 1st Army in Tunisia were very convincing – especially as they were able to climb almost any hill in the area that other tanks had not been able to attack before. Thus, the infantry tank received again a grace period. In the year 1943 the Churchill was armed again differently, this time with the new British version of the 75 mm cannon.

At the same time, significant design improvements were made. Since the vehicle was designed at a time when the British restrictions on railway loading areas had to be complied with – as were all other British battle tanks – Churchill also suffered from the disadvantage of being too narrow to receive a larger turret for the 17-pound cannons. For this reason it was under armed compared to its German rivals in 1944-45, but this was compensated to some extent by the vehicle’s thick armor.

The other factor which made the Churchill tank one of the most important British tanks of the years 1939 to 1945 was its ability to develop a whole series of special vehicles from it, which were needed for the planned invasion of Northwest Europe in 1944. The spacious interior of the vehicle, together with its regular shapes and heavy armor, made it particularly useful as an armored engineer vehicle, bridge layer or recovery tank. In addition, many experimental variants were developed and tested.

Like the Churchill I, but the 3-inch howitzer in the font hull was replaced by a second Besa machine gun.

Like the Churchill I, but the gun positions were changed so that the 3-inch howitzer was in the turret and the 2-pounder cannon in the front of the hull. Built only in small numbers.

These first three versions all had uncovered tracks and engine intake louvres on the side of the hull, which had side openings. From May 1942 most of the existing vehicles were overhauled and got full track covers on the sides, as well as reinforcement plates in front. New engine air intake louvres were also installed, which were at the top to prevent the engine from being flooded when wading. For wading through greater water depths, trunking could be installed at the end of the engine air intakes. In addition, there were further mechanical improvements.

This version appeared in March 1942 and was the first to receive a 6-pounder cannon after the British War Office wanted to see the existing types of cruiser and infantry tanks more heavily armed. To use the 6-pounder cannon, a new welded turret was necessary. The first Mk IIIs, built before May 1942, had the original type of air intakes and no track covers. Many of the Mk I and Mk II built so far were upgraded to the standard of the Mk III and received the new turret with the 6-pounder cannon.

The appearance of the American M3 Lee/Grant and M4 Sherman tanks in the desert war emphasized the need for 75 mm caliber cannons for the British tanks, which could simultaneously fire explosive or armor-piercing shells. The workshops of the British 1st Army Brigades in Tunisia equipped with Churchill tanks therefore began in January 1943 on their own initiative to equip 120 Mk IV with the American 75 mm M3 cannon including gun mantles, which had been removed from unusable Sherman tanks.
These were the first British tanks ever to go into combat with a 75 mm cannon. They were used with great success in the campaign on Sicily and Italy and remained in use until the end of the war. In this form 84 shells of caliber 75 mm could be carried and the abbreviation ‘NA’ stood for North Africa.

In September 1941, the British General Staff asked those responsible for the Tank Force whether there was any possibility of installing guns of larger caliber and projectile speed in cruiser and infantry tanks, in particular to combat the expected new heavy German tanks. In order to meet this requirement for the cruiser tanks, the Challenger with a 17-pound cannon was developed.
For the infantry tank, it was proposed to install a 3-inch anti-aircraft gun (76.2 mm) with a limited aiming range in a Churchill chassis. This weapon was available because it was replaced in the anti-aircraft units by the 3.7-inch gun. One hundred vehicles were to be manufactured, but in December 1941 it was decided that all Churchill tanks produced would be required as battle tanks and equipped with the 6-pounder cannon currently available.
Therefore, the order was reduced to 24 vehicles and the prototype was ready in February 1942. None of the vehicles were ever used in combat and most were converted to Snake A22D mine clearer for trials and training in 1943 and 1944.

Built together with the Churchill IV, this was basically the same vehicle, but armed with a 95-mm howitzer instead of the 6-pounders to be used for close support. Only 10% of Churchill production – including the Mk VIII listed below – was delivered with the 95 mm howitzer. 47 shots for the howitzer could be carried.

The experiences in the desert war led to demands to install a 75 mm cannon in the British tanks, which was comparable with the American 75 mm cannon in the medium M3 and M4 tanks, which were used so successfully by the British 8th Army. Thus, a British version of the American 75 mm cannon was developed by Vickers, which could also fire the American ammunition. Since January 1943 plans were being prepared to install this new cannon in the Churchill, but the 75 mm cannon was not available until the winter of 1943-44. In the meantime, a new Churchill version for this new cannon as Mk VII (see next version) was also developed.
So from November 1943 existing Mk IV were brought to the standard of the planned Mk VII by adding a commander cupola, vane sights, and the 75 mm cannon instead of the 6 pounders. These retrofitted vehicles were called Mk VI, while the newly built Churchill were called Mk VII. All were used in Northwestern Europe in 1944-45.

This was the largely revised version of the Churchill tank with a thicker, integrated armor compared to the composite armor of the previous vehicles. A new cast and welded heavy turret with commander cupola, circular instead of square emergency hatches, heavier suspension, improved transmission, the new 75 mm cannon and many other detail improvements were used. As A22F this version was used in the campaign in northwest Europe from 1944 to 1945 and remained many years after end of war in the troop use. 84 rounds of ammunition could be carried and starting from 1945 the vehicles were called A42.

Churchill IX
These were reworked Churchill III or IV with the installation of the new cast and welded turret of the Mk VII, but still armed with the 6-pounder cannon. Further improvements were additional armor on the sides and front of the hull.

Also reworked Churchill III or IV, but with the original turret.

Churchill Mk IV on Mk IX, but with the 75-mm cannon.

Revised Mk V to Mk XI, but with original turret.

Video from the action with Churchill tank in video games