The combat debut of the T-34 Model 1940 tank in the summer of 1941 revealed it to be unquestionably the finest tank design of its time. The revolutionary combination of thick, angled armour, heavy firepower and superb mobility placed it in a dass above its closest German contemporaries, the Panzer III and Panzer IV. This forced the Germans to begin a costly programme of up-gunning and up-armouring its tanks, and initiate the development of a new tank, the Panzer V Panther to serve as an antidote to the T-34. The appearance of the T-34 also forced the Germans to completely revamp their anti-tank arsenal because the existing 37mm PAK 36 and 50mm anti-tank guns were largely ineffective against the T-34 and KV tank . While the 88 mm AA gun could be used as a stopgap in limited circumstances, only the arrival of the PAK 40 75mm anti-tank gun could restore the balance.

The early T-34 was not without its problems. The early production batches had serious transmission defects, and indeed, probably more T-34s were lost in 1941 to mechanical trouble than to enemy action.

During the evacuation of KhPZ No. 183 to Nizhni Tagil, production of the T-34 shifted to the Stalingrad Tractor Factory and to Krasnoye Sormovo Zavod No. 112 which began T-34 production in July 1941. The GKB-T-34 (T-34 Main Design Bureau), headed by Morozov since Koshkin’s death, was shifted to Nizhni Tagil as well.

Two vexing questions remained. The T-34 Model 1940 was armed with the short L-11 gun which did not meet the stated requirements. P. Muraviev of F. Grabin’s design team at Zavod Nr. 92 in Gorki had designed a much superior gun, the F-34, before the war, but in the confused state of gun production brought about by Kulik’s interference, none of the relevant bureaucrats would authorize its production. Grabin, with the connivance of the director of Zavod Nr. 92 began providing KhPZ with the new F-34 in place of the L-11, and the first unofficial T-34 Model 1941s began to appear shortly before the war started.
Used mainly as platoon and company commanders’ tanks, they were enormously popular, and letters were sent from a number of units praising the new design. This came to the attention of Stalin and the GKO which finally authorized the F-34. It would remain the main gun of the T-34 until 1944 (followed by the T-34-85 with 85-mm gun in 1944).

The second problem was that in 1940 when permission to begin production of the T-34 was sought, its critics forced the design team to agree to develop a more satisfactory design, the T-34M. The more realistic members of the GVS upset an attempt to delay production of the T-34 until the T-34M was ready and in the critical state of affairs in the autumn of 1941, the T-34M project slipped into limbo before a prototype had been completed.

The same conservative critics of the T-34 had also insisted on the production of an infantry tank, the T-50, to supplement the T-34. By the time that T-50 production commenced at Omsk in 1941, however, it became apparent that the infantry tank would cost as much to produce as a T-34, yet clearly did not have equal combat utility. It was a luxury the Red Army could ill afford at the time and was cancelled after a small production run. This left the T-34 as the universal tank that Koshkin had originally proposed, fulfilling the roles previously filled by the T-26 infantry tank, BT cavalry tank and T-28 medium tank.

The main emphasis of the Morozov design team was on simplification of the T-34 to cut costs and make production by an unskilled work force easier. In the spring of 1941, V.Buslov and V.Nitsenko developed a cast turret, similar in outline to the welded turret used on the T-34, but easier to manufacture. It was adopted and both T-34 Model 1940s and Model 1941s used cast and welded turrets. T-34s produced at STZ primarily used welded turrets; those produced at Krasnoye Sormovo used cast turrets. 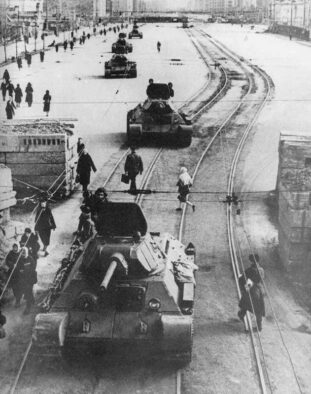 T-34 are moving from the Leningrad tank factory direct to the close front line. 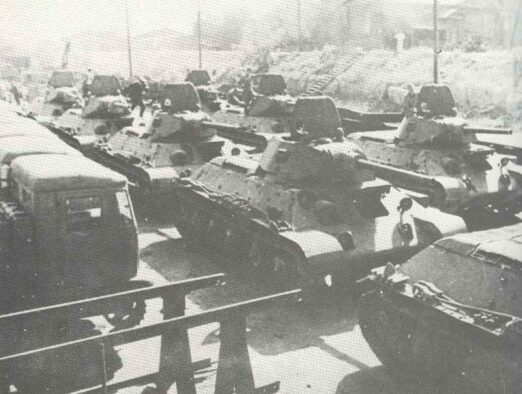 During the grim days of the winter of 1941-42, little kept the tank forces from all but disappearing but the production of the STZ Factory in Stalingrad which was one of the few not evacuated. In the autumn of 1942 it was the scene some of the heaviest fighting in the great battle for the city. Here, T-34 Model 1941 and 1942 tanks and STZ-5 tractors in the rail marshalling yards outside the factory are inspected before shipment. 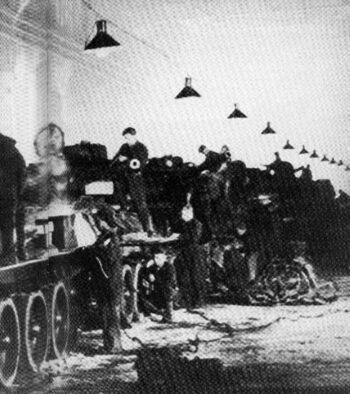 The Stalingrad tank factory before the battle. 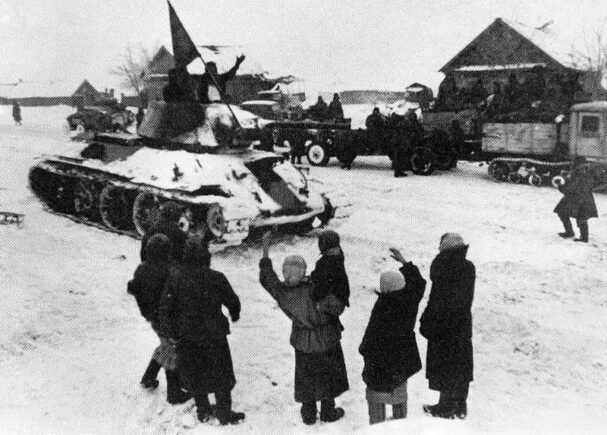 This T-34 is entering a village during the Russian counter-offensive near Stalingrad in November 1942. 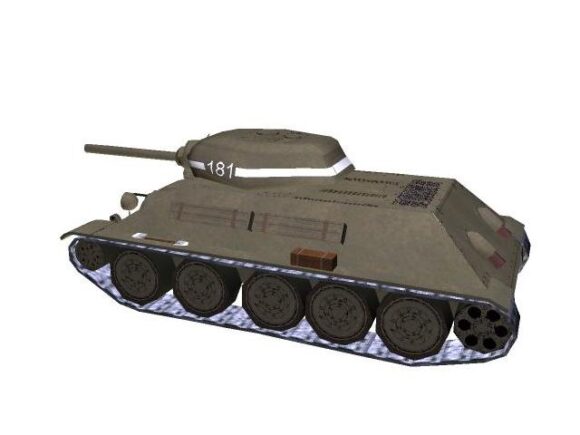 The only major external features which identified this new version were the redesigned driver’s hatch, the circular access port in the rear and other small details. At the end of 1941 the T-34 Model 1942 was gradually eased into production at STZ and Krasnoye Sormovo, as parts for the earlier Model 1941 were used up. Indeed, STZ produced some tanks which combined features from both the Model 1941 and the Model 1942. Production of the T-34 at Nizhni Tagil resumed in December 1941 despite horrendous conditions.

Service statistics of all T-34 variants with 76.2-mm-gun: