During the development of the two models of the Tiger tank, one by Porsche and Henschel each, Hitler had excitedly demanded a turret design, which was big enough to install the new 8.8cm Pak L/71. This could not be implemented and so it was decided on 22 September 1942 to develop an assault gun with 200 mm frontal armor and the long 8.8 cm gun on the chassis of the Tiger (P) immediately and part of the Porsche Tiger production was diverted for this vehicle.

Porsche lost the development with its too complicated and error-prone design of the Tiger tank to the Henschel company. Professor Ferdinand Porsche’s influence on Hitler was strong, however, since his unusual technical ideas had a fascinating effect on the Fuehrer. So it happened that Porsche was allowed to start on behalf of Hitler with the construction of its own vehicles, so that there were existing 90 more or less finished chassis, which were then practically unusable.
Only two of the Porsche Tigers were fully completed, but suffered from the too complicated technology and were never ready for front line use. To avoid wasting all the other chassis, the heavy tank destroyer Elefant (‘Elephant’) should be created from the available chassis by replacing the unreliable Porsche diesel engines with proven Maybach engines. The new 8.8cm Pak43/2 anti-tank gun, which was developed from the 8.8-cm Flak 18/37, should serve as an armament.

The company Alkett was chosen for the design and construction of the tank destroyer ‘Ferdinand’ (as called by the troops later after Professor Dr. Ferdinand Porsche, as ridicule of his unspeakable construction), while the Nibelungenwerke should supply the complete chassis.

Despite a lack of parts for the suspension and missing test runs, Hitler ordered on 6 February 1943, 90 Jagdpanzer (tank destroyer) Ferdinand as soon as possible and under all circumstances to build for use at the front. This led to the fact that the Nibelungenwerke instead Alkett produced entirely the vehicle, which was named by Hitler as tank destroyer ‘Elefant’ (‘Elephant’).

All 90 vehicles were ready by the end of May 1943 to be used for the great summer offensive in the tank battle of Kursk, along with the Tiger tanks and the new Panzer V Panther which was also scheduled for this date.

The hull of the tank destroyer Elefant was the one of the Tiger(P), however, additional 100 mm armor plates were riveted to the front, and an additional rear piece to support the superstructure and assemble cooling air exhausts for the rearmost electric engine.

Within the superstructure was the long 8.8 cm gun with a limited traverse mount. The Tiger’s(P) fighting compartment, originally set up in the middle, was not suitable for taking up the long gun together with 50 rounds of ammunition. Therefore, the tank had to be fundamentally changed, with the two new engines were moved to the middle and the fighting compartment came to the rear and thereafter the electric transmission.
The sides of the box-like structure were protected as well as possible and the gun still protruded 4 foot (1.22 meters) ahead.

A secondary armament was mounted not before late 1943, when the vehicles returned from the front were rebuilt and received a machine gun in the front hull. The superstructure was changed at the same time to equip the commander with a cupola. In this way, 48 tank destroyers Elefant were rebuilt and then used in Italy in 1944.

The hull was flat like at the Tiger tank and the superstructure was very spacious. The crew boarded the tank destroyer through a large, round hatch on the back. Otherwise, there were virtually no openings in the strong armored structure and all joints overlapped and were welded.

Steel rims were used for the wheels of the track drive, resulting in some suspension and a quiet ride. Therefore, support rollers were not necessary and the front idler was mounted slightly higher so that the vehicle could better climb across obstacles.
The two Maybach engines gave their power to a Siemens-Suchert dynamo, which supplied the two rear electric engines with electric power, which in turn moved the drive wheels. The control had to be supported by hydraulic motors, but no gearshift was necessary, which made the work easier for the driver. 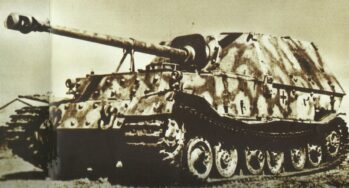 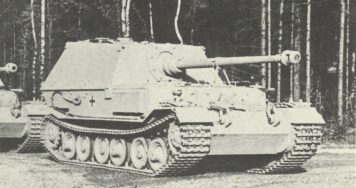 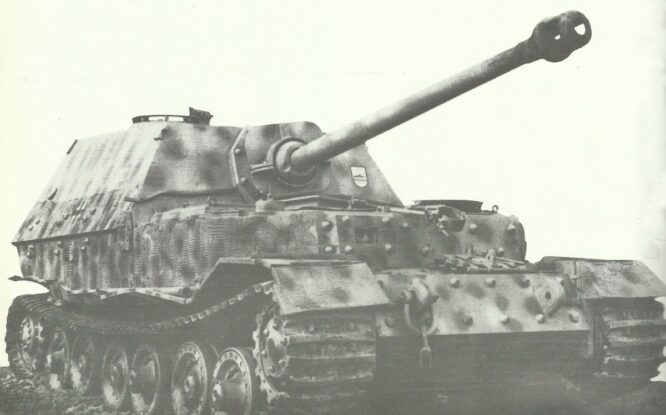 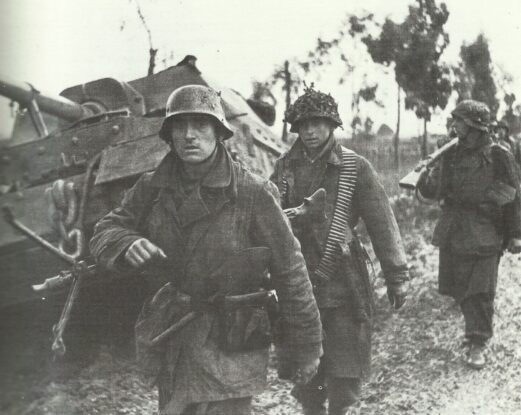 German infantry from a Luftwaffe unit pass a disabled tank destroyer Elefant in 1944 in Italy.

The tank destroyers Elefant were assigned to the Schwere Panzerjaegerabteilung (Heavy Tank Destroyer Detachments) 653 and 654 in April and May 1943. These units fought at Kursk during the limited German offensive and later in summer and autumn helped to close front gaps in this section of the Eastern Front.

It was noticeable that the Elefant was dispatched in a hurry before all technical problems were resolved and the crews had enough time to familiarize themselves with the vehicles. As soon as the Elefant’s started with their assault, many break-down with technical failures.

Nevertheless, during the great Tank Battle of Kursk, the two Panzerjaegerabteilungen successfully led the first attack and broke through the Soviet lines of defense. Although the vehicles were armed with the strongest available gun, they had not received self-defense weapons. Thus, Soviet infantry could put many of them out of action in the rear lines, as their crews could not defend themselves.

The advantage of the tank destroyer Elefant was its large gun and thick armor, so that the vehicle could fight enemy tanks at very great distances, while the vehicle itself was invulnerable to any frontal fire.
But this advantage was associated with extremely high ground pressure, so that the vehicle easily stuck in difficult terrain. Therefore, roads, paths and terrain had to be explored before a movement or combat mission.
However, when used as ‘mobile bunkers’ in defense, they were successful.

The two units were pulled out of the front line in late 1943 to overhaul the vehicles. Subsequently, only the 653rd Panzerjaegerabteilung was re-equipped with the converted vehicles and a separate company assigned to the 614th Panzerjaegerabteilung.
The tank destroyer Elefant could not fix its bad reputation from the catastrophic debut at Kursk, but the remaining vehicles were used in 1944 in Italy. The lack of spare parts, its size, technical unreliability and immobility led to numerous failures and some were also captured by Allied troops.

Model of the Elefant tank destroyer after converted with hull machine-gun and commander’s cupola late 1943.