The Beretta sub-machine gun originated from a semi-automatic carbine from 1935. But this weapon of the designer Tullio Marengoni was revised and went with selective fire selection in 1938 at the company Beretta in Brescia in production. It was a weapon in the form of a carbine with unlocked lock.
As a highly successful weapon, it underwent many minor changes during its construction period and remained in production until 1950, before being replaced by more modern designs.

The first model had a full wooden shaft, similar to the old 1918 model, but the magazine was below the gun, with a specially designed folding bayonet and a cooling jacket with large, initially oval, holes around the barrel.
The Beretta submachine gun also had a complete new two-trigger firing mechanism. The front trigger was for delivering single shots and the rear trigger for fully automatic firing. The front end of the mantle was shaped into a rudimentary compensator, with two large holes on top.

Although it was a very useful design, this weapon was only built in small numbers in 1938 and quickly replaced with a second version, which did not have a distinctive model number.
This version received a fire selector lever through a locking bolt in the form of a cross bolt behind the last trigger. If this was pressed in, this prevented that the rear trigger could be operated and the weapon worked only in single fire. The barrel jacket had smaller, circular holes, but the compensator and bayonet of the first model were retained.

A third version was designed in late 1938 and went in 1939 in addition to the second version into mass-production. The difference was in the omission of the bayonet and a change in the design of the compensator with four upturned holes.
Both versions were mass-produced in large numbers for the Italian, German and Romanian Armed Forces until 1944. After that, the production stopped for some time, to be continued after the war.

The original design required completely machined components, a more expensive and slower manufacturing process. So in 1940 slight changes were made to allow for faster production. The barrel casing was now made of stamped sheet metal, rolled and welded, while the bolt design was simplified by taking over a heritage of the Villar Perosa Model 1918, a solid firing pin instead of a separate component.

The Beretta sub-machine guns were later even in conditions of mass production consuming – comparable to hand manufacturing – built in excellent quality. The weapon was so balanced that it could be used in a special way in combat. It was quite heavy, but mostly reliable and precise. With a 10-round magazine, it could be used just as a single-fire carbine and was very accurate at distances up to 330 yards (300 meters).

While the gun was originally intended for the 9 mm Glisenti ammunition, the German 9 mm Parabellum cartridge could just as well be fired. But to achieve the best possible performance, a special cartridge, called 9 mm M38, was originally issued for the weapon. This was marked by a green border at the top and was delivered in 10-shot pallets, which was loaded with a special tool into the magazine. There were magazines in different sizes for 10, 20, 30 or 40 cartridges.

The Beretta sub-machine gun model 1938A was widely used during World War II. The Italian Armed Forces used them mainly in North Africa and Russia and it was also taken over by the Wehrmacht as Maschinenpistole (Beretta) 38 (i). In addition to the copies captured in 1943, another 230,000 pieces were delivered directly from the factory to the Germans. Also, the weapon was used by the Romanian and Croatian army.
Captured Beretta submachine guns were also welcome to the Allied troops, although they were always short of sufficient magazines and cartridges.
The Italian army and police used the Beretta sub-machine guns still after the Second World War.

Beretta Model 38/42: In order to further simplify the production of the Model 1938A, it has been further developed by the designer Marengoni to the Model 38/42. While it was basically the same weapon as the Model 1938A, components and magazine housings were made from stamped metal parts, the cooling jacket was omitted, and the compensator was reset to a two-hole type. The visor was replaced by a simpler, folding visor.
The first version received a barrel with cooling fins and two cuts at the top of the mouth, which served as heave compensator. This device turned out to be superfluous and was quickly omitted and the barrel became smooth. The barrel and wood shaft was also shortened and ended behind the magazine housing.

Beretta Model 38/43: The term was sometimes used for the Model 38/42 with smooth barrel.

Beretta Model 38/44: Largely the same as the Model 38/43 but with a slight change in the design of the bolt and the return spring. As a result, the receiver end cap was plain the Models 38/42 and 38/43 had a raised center on the cap which served as an anchor for the return spring. 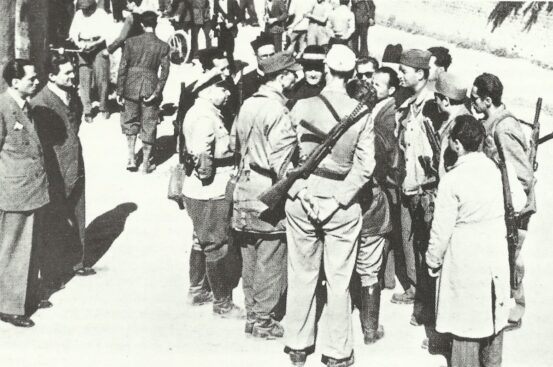 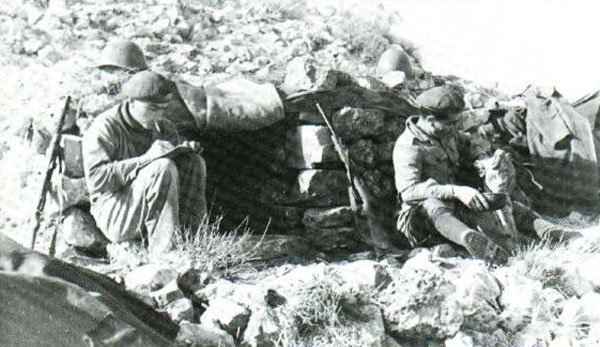 Italian troops in 1943 in Tunisia, with Beretta sub-machine guns with 10-round magazines ready, which is an indication that the weapon is used like a carbine over longer shooting distances.