The well-known Lee-Enfield rifle began its service with the British Army in 1895 and ran into some 27 different models before being replaced by a self-loader in 1957. The most famous model was probably the Mark 3, the ‘Short’ Lee-Enfield, so-called because it introduced a new idea into military rifles. Prior to its introduction (in 1903) it was customary to produce two rifle type weapons, one a long rifle for infantry use and one a short carbine for cavalry and other mounted troops such as engineers and artillery. The ‘Short’ Lee-Enfield was shorter than a normal ‘long’ rifle, and longer than a carbine, and thus it was possible to standardize on one weapon for all branches of the Army.

Excellent as the Mark 3 was, it had some drawbacks, and the major one was that its manufacture was time-consuming, demanding much machining and hand­fitting. The other principal complaint was that the nature and location of the back sight (an open-topped U in front of the chamber) made it difficult to master quickly. Because of these points, work began immediately after the Armistice in 1918 to try to develop a rifle which retained the Lee-Enfield’s many virtues’ ­ robustness, speed of operation, reliability – but which had better sights and was easier to make. The first attempt was the ‘No.1 Mark 5’ (a new system of nomenclature had been adopted after the war) which was little more than a Mark 3 with an aperture sight at the rear of the receiver. It was never adopted as a service weapon. The design was then simplified into the ‘No.1 Mark 6’ which used a heavier barrel, a new design of bolt, less woodwork, and a projecting muzzle on to which a spike bayonet could be fixed. This too was never adopted, but with a little more improvement it became the ‘No.4 Mark 1’, the standard WW2 rifle.

The No.4 rifle was much like the earlier Mark 6, but there were numerous small changes which simplified production. It was first issued late in 1939, though not officially adopted until 13 February 1941. Well over one million were made from November 1939 onwards during the Second World War, both in Britain and across the Atlantic in the USA and Canada, and after some misgivings by old soldiers who missed the immaculate finish of the Mark 3, the No.4 became liked and trusted in its turn. It remained in service as a sniping rifle, using 7.62 mm NATO ammunition. 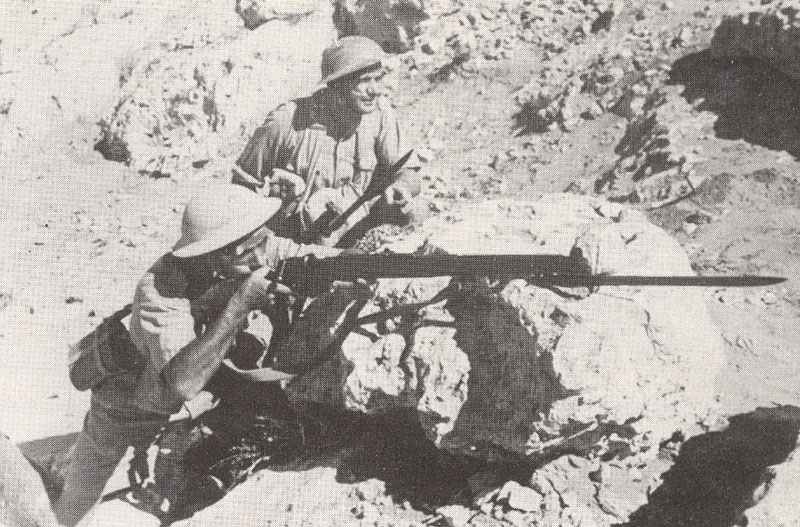 Polish soldiers with Lee Enfield rifles. Polish troops were among 14,000 men replacing the Australians in Tobruk by 1941, Oct.26 after a 7-week-exchange. 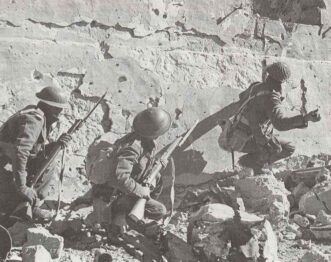 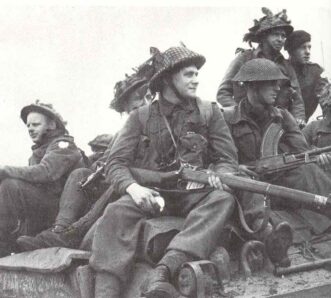 British troops, armed with Lee-Enfield rifles and the light Bren machine-gun, moving forward on the back of a Sherman tank in September 1944. 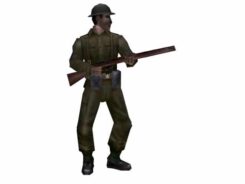 3D model of a Tommy with Enfield rifle.