Browning M1918 in World War One

In February 1917, shortly before the USA entered World War One, Browning presented two automatic weapons designs to Congress in Washington. One of them was the heavy machine gun Browning M1917, while the other gun is actually a hermaphrodite.

This Browning Automatic Rifle M1918 or short BAR did not fit into any category. The rifle was the size of an ordinary repeating rifle, but with twice the weight and made continuous fire possible by a gas pressure mechanism, which moved the locked breech.

In many other armed forces, the weapon later served as a light machine gun, but in the US Army it was initially used exclusively as an automatic rifle and was often used in a similar way to later assault rifles.
It was still a relatively light and movable weapon, which could fire single shots or full-auto and was used by one man.

At the beginning of 1918 the BAR was produced in several factories, but since Colt held the Browning patents at that time, they first completed the technical drawings and models for the other manufacturers. So it took until September 1918 until the BAR could finally be used.
But then the weapon made such a great impression on the American soldiers that the BAR was still used in the Korean War and was used by the US Army until 1957.

Why the American soldiers were so fascinated by the BAR is actually difficult to explain. The first BAR, which were used in World War One, could only be fired from the hands, because they did not even have the bipod of a light machine gun.
In addition, the box magazine contained only 20 rounds of ammunition, so that during automatic firing the length of the possible burst was very limited and much too short for most infantry fights. Also, a hot barrel could not be replaced quickly and easily.
As a light machine gun the BAR was actually too light, while as an automatic rifle it was too big and too heavy.

But during World War One, the American soldiers were glad to have received the BAR and no longer had to fight with the terrible Chauchat machine gun.
Apart from the Springfield rifle, the BAR was pretty much the only real American weapon they had received and undoubtedly wanted to emphasize the quality of their national firearms.

The BAR was indeed an impressive looking weapon, was excellently crafted and had an excellent wooden stock. In addition, the weapon could withstand heavy blows and a hard treatment well.
For maintenance and repairs, the BAR could be quickly and easily dismantled into its 70 parts and reassembled just as easily.

For combat missions, the US Army had some combat exercises carried out for the BAR. A drill did not last long, in which attacking soldiers should fire a shot with every left foot step forward.
In fact, practical drills only emerged after the few months of war with American involvement had been analyzed after the November 1918 ceasefire.

So now a bipod and shoulder strap were mounted to carry the BAR and it became the BAR M1918A1 in 1937. Instead of being a kind of assault weapon, as it was used in the trench warfare of World War One, the BAR supported the infantry group by covering fire during combat.

A total of about 85,000 copies of the 1918 model were delivered and the original M1918 stock was sent to Britain in 1940 to equip the Home Guard and other secondary units.

After the outbreak of World War II the light Browning machine gun was changed in 1940 to the BAR M1918A2 and in this version large quantities were ordered by the US Army. In this model the bipod was revised and the firing stability was improved.

Besides the M1918A1, the new M1918A2 was the main light support weapon for an infantry platoon of the US Army and the US Marines in World War II. However, the weapon was still fired from case to case as a kind of ‘assault rifle’ holding in the hands.

The new weapon was manufactured by the New England Arms Company and the International Business Machines in a quantity of 208,380 units.
This made the BAR M1918A2 the most common light machine gun in the US armed forces and remained in use in this form until the early 1960s.

Nevertheless, there was still a lack of the too small magazine with only 20 rounds when used as a light machine gun. It was still considered a hermaphrodite by military theorists, while it was generally popular with field troops.

During the Second World War, the M1918A2 was also used by many Allied forces, including the National Chinese Army.
It is still in use in Third World countries today and a modernized version for police missions is available under the name ‘Monitor’. 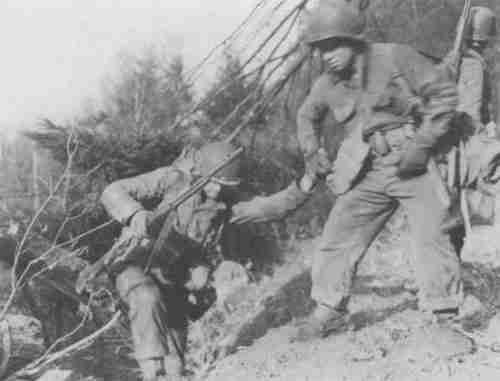 An US BAR team struggles throught the muddy pine woods of the Hürtgen Forest near Aachen. During the weeks of murderous fightings there the GIs from 4th, 8th and 28th Division were among those who paid for the slow advance of the 1st US Army. 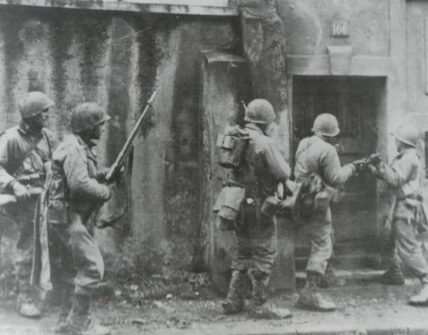 At Metz rifleman and a BAR gunner from the US 5th Division check houses for enemy ‘stay-behinds’. The Germans turned Metz into a fortress which held up the Addlied advance for mayn weeks; it finally fell to XX Corps of General Patton’s 3rd US Army after a fortnight’s hard fighting. 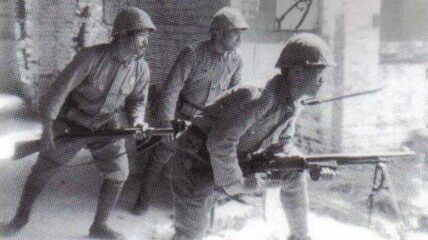 Japanese machine gun troop in the early morning light in an abandoned building. Noteworthy is the M1918A1 Browning Automatic Rifle in the foreground, which was captured from National Chinese troops. 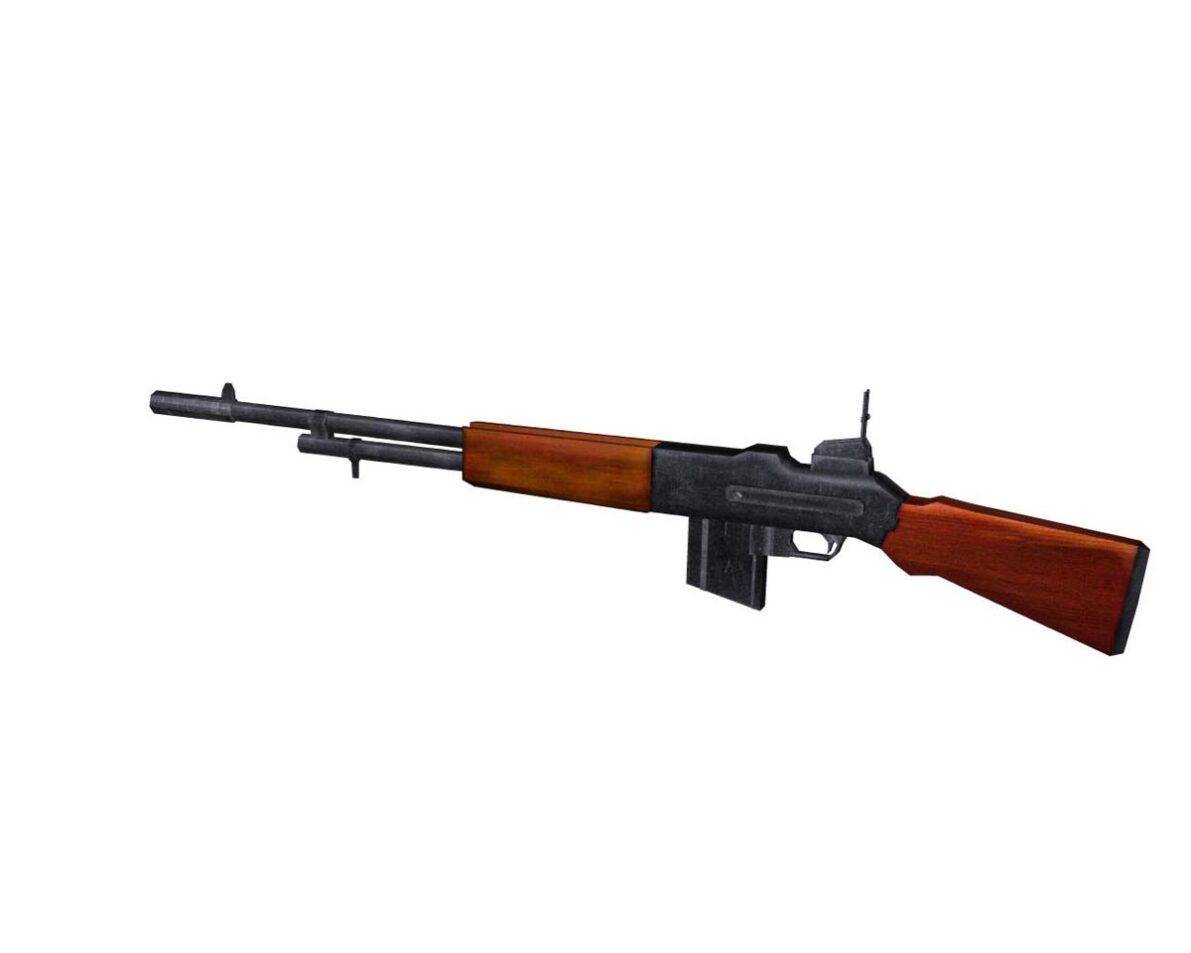 Browning M1918 in Belgium and Poland

The inventor of the Browning machine gun, John M Browning, worked for the Belgian Fabrique Nationale d’Armes de Guerre in Herstal for years after World War One, where he died in 1928. Since 1920 his BAR was produced here under license and small quantities were also delivered to the armed forces of Sweden, some Baltic states and Central and South America, including Honduras. Many of these eventually ended up with the National Chinese Army.
The Belgian armed forces introduced the slightly improved and precisely processed original 7.65 mm caliber weapon as a 1930 model and used it in 1940. During the German occupation, the FN weapon factory continued to build the machine gun for the Wehrmacht.

The Polish army introduced the BAR modified in caliber 7.92 mm as model 1926 and the Belgian company delivered about 10,000 pieces until 1930. Subsequently, the Warsaw factory began to build its own model in 1928, which was based on a Belgian license.
This light machine gun was perfected by 1939 and around 11,000 weapons were available to the Polish armed forces at the outbreak of World War II.
Before the war, 1,880 units were exported by the Poles and specimens captured in Poland were used by both the Red Army and the Germans during the Second World War.