Like any other army, the Wehrmacht used a 27 mm caliber smooth-bore signal pistol to fire a wide range of signal cartridges, much more different types than other forces. There were colored stars, smoke cartridges, and even sound signals.

The Walther signal pistol was taken over by the German army at the end of 1926. This was practically a copy of the 1907 model.
In 1934 the barrel was shortened from 232 mm to 155 mm and the rifle was called Heeresmodell (‘Army model’). From 1937 this model replaced signal pistols of the same size, but lower weight, which had previously been built with anodized aluminum alloy.

The ‘Army model’ was built in large numbers by the companies Walther, Erma and Bernhard Berghaus. Due to a lack of raw materials, it was manufactured from the middle of the war using the ZETAL zinc alloy.

The army model was a well-tried design with tilting barrel, which was operated by a lever in front of the trigger guard, plus a trigger system with individual movement and outside cock.

In the course of the war, the Model 42 signal pistol was added and was originally intended as a replacement for the more elaborate ‘Army Model’ to be produced.
The entire weapon, including the butt, was made of only two steel plates, which were pressed and formed and then welded together in a single seam.
The steel barrel was tilted by a trigger on the left side of the weapon and the trigger system had single movement and an outer cock.
This signal pistol was built by four companies.

Since signal pistols were very primitive weapons with the simplest function, at the same time for all possible purposes extensively needed by the troops, there were soon also different and simpler other products.
Some strong tube with a suitable diameter was used for the barrel. The breech was a plate that could be folded down sideways on a bolt, which had a tube housing with firing pin and spring in the middle. A wooden or metal butt was simply attached under the barrel.
The quality of these weapons was different depending on the manufacturer.

The Luftwaffe used larger quantities of double-barreled L-type signal pistols. These were made of the light alloy Duralumin and both barrels could be tilted simultaneously by a lever in front of the trigger guard. This tensioned the trigger mechanism at the same time.
The projectiles in the two barrels could then be fired either simultaneously or individually. 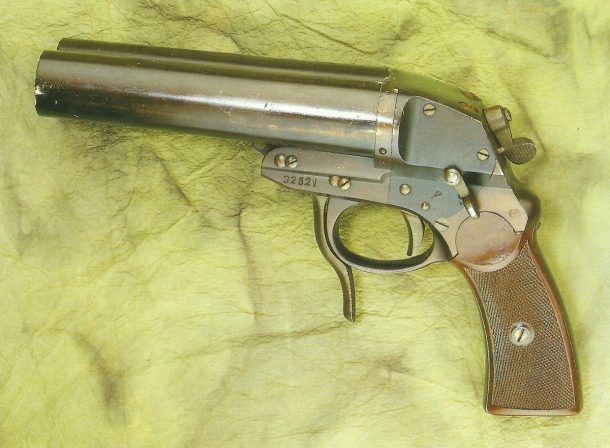 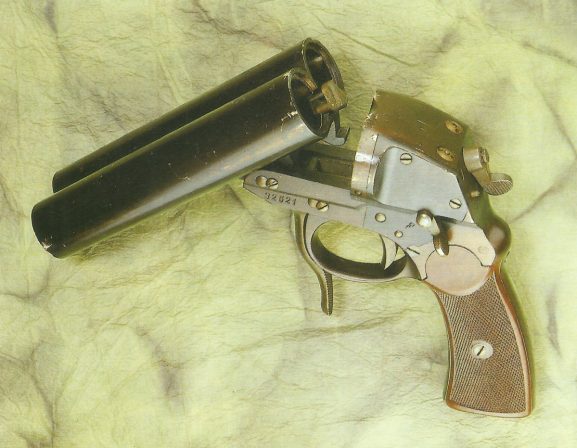 The Germans, however, went one step further with the signal pistols by producing small grenades which could also be fired from the signal pistol ‘Heeresmodell’ (Army model). These proved to be very effective within their field of application and so the ‘Kampfpistole’ (Battle pistol) was introduced in an attempt to increase the range of applications.
This pistol was based on the Signal Pistol, but for greater range and accuracy it used the same barrel as the rifle discharger cup (grenade).

There were two basic models of the Battle Pistol. The first version, which was issued to the troops, was simply the standard Walther signal pistol ‘Heeresmodell’ with barrel bored out and eight lands and grooves.
A small bubble-like clinometer sight was attached to the left back of the pistol, above the butt. Four types of grenades were developed for use with this pistol, but the standard smooth-bore flare pistol ammunition could also be fired, but with the risk of bulging cartridge cases and slight range loss. The improved model was again a modification of the signal pistol, but in this version the barrel was bored out and a rifled steel liner was inserted. This liner was formed with a collar at the bottom end, which prevented the loading of a normal breech-loading flare cartridge or ammunition from this pistol.
A removable sight was attached to the barrel and a foldable butt was provided. By removing the steel liner, which was done quickly with the help of a screwdriver, and then replacing it with a smooth-bore liner, any ammunition for the signal pistol could be fired. But none of the cartridges for the original Battle pistol could be fired with this second model.

The Battle pistols were widely used by the German troops, but especially on the Eastern front. They were mainly used for fighting enemy soldiers.

Wurfkoerper 361 LP
An egg hand grenade 39 screwed on a steam. Before firing, a brass reinforcement tube had to be inserted into the barrel of the pistol from the end of the breech. On the bottom plate of the grenade stem there was a percussion cap and a small propellant charge. This also caused a delay of more than 4 seconds to ignite the grenade. The range was between 75 and 100 meters. Wurfgranate Patrone 326 LP

A small bomb with fins in a cartridge case similar to a signal cartridge case. When shooting, a safety pin slipped away from the rear and activated the impact fuse. Range up to 300 meters with the short-barreled pistol and 500 meters with long barrel.

Sprenggranate Pat. LP
Cylindrical projectile with rounded nose in a cartridge case similar to that of signal projectiles. Only for close combat from armored vehicles or cover, since the range was only about 5 meters and thus smaller than the effective range. Delay fuse with one second.

Nebelpatrone for KP
A smoke grenade of similar size and appearance to the high-explosive grenade.

Deutpatrone for KP
A target-indicating grenade, similar to the predecessor models, but with a rounded nose instead of a fuse. The propellant charge lit a pyrotechnic delay which ignited the composition of the projectile, emitting reddish-brown smoke.

Fallschirm-Leuchtpatrone for KP
A parachute flare grenade. Similar to Deutpatrone cartridge, except that the nose was made of black plastic. Shot into the air, a shining white star appeared, which sank slowly at a parachute.

Fallschirm-Signalpatrone for KP
Similar to the previous light cartridge, but with a green star.

Nachrichtenpatrone for KP
A projectile that could carry messages. The hollow body had a black plastic nose and was provided with a message form and pencil inside. The nose was unscrewed, the message was written and put in, the nose was replaced and the cartridge was fired.

Wurfkoerper 361 KP
Similar to the 361 LP (above), but with a special stem with a pre-rifled band adapted to the insert.