When the production of MG34 models was obviously insufficient for the German Army’s needs, a new design of weapon was begun, one which would be easier to mass-produce. For the first time the design was not left entirely in the hands of gun makers; a Doctor Grunow of the Johannes Grossfuss Metall und Lackierwarenfabrik at Doebeln, experts in pressing and stamping metal, was called in to advise at an early stage in design. As a result the final design was specifically laid out to suit stamping and pressing processes, with welding and riveting used for assembly.

The action of the MG42 was modified to use a non-rotating bolt locking into a barrel extension by two rollers caromed outwards. Unless the rollers were out, locking the breech, the firing pin could not pass through the center of the bolt. On recoil the barrel, bolt and barrel extension recoiled locked together until cam tracks in the gun body moved the rollers inwards to release the bolt.
Movement of the bolt drove a feed arm mounted in the top cover of the gun which in turn operated paws to feed the ammunition belt; the design was most ingenious and fed the belt smoothly and reliably and has been widely copied in other weapons since its original appearance in the MG42.

One of the results of the re-design was to raise the rate of fire to an astonishing 1,200 rpm, much higher than any other contemporary machine gun and a rate which has only rarely since been exceeded. As a result the barrel had to be designed for quick-changing – every 250 rounds was the recommended figure – and this was done by unlatching the breech end and swinging it out through a long slot in the right-hand side of the barrel casing; a fresh barrel could be fitted in five seconds.

As with the MG34, the MG42 was used on a bipod as a light machine gun or on a tripod as a medium gun, though the high rate of fire made it difficult to control on a bipod. It was extremely reliable, highly resistant to dust and cold conditions and was extremely popular with the Wehrmacht – and understandably less popular with their enemies. Its first use in action is said to have been by the Afrika Korps at Gazala in May 1942. Shortly thereafter, it was also deployed in Russia and from then on every German front until the end of the war. 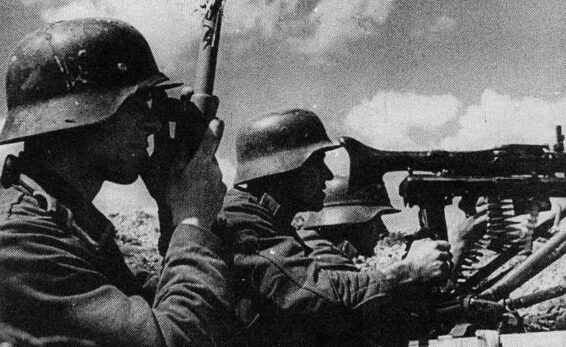 MG42 gunners in trench firing position at the front of Leningrad. 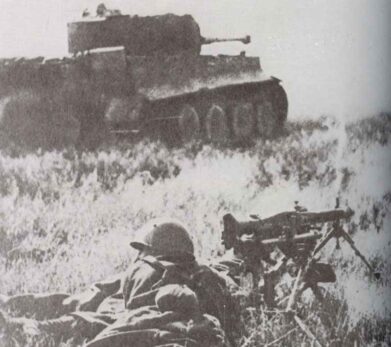 Italian MG42 gunners protecting a German Tiger tank in Tunesia. A large number of German weapons were taken use by the Italian army, often remaining them in the process. 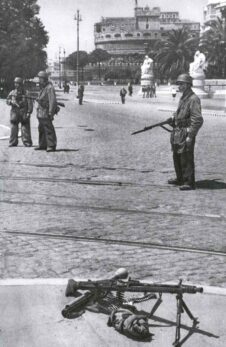 German partatroopers guarding the entrance to the Castel Sant’Angelo in Rome. MG42 and a Panzerfaust are ready for use. 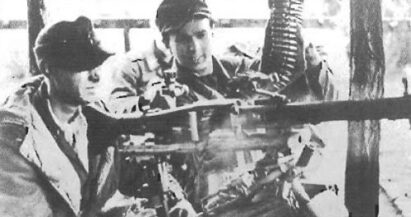 A German fire support team manning an MG42 medium machine gun on a tripod mount for the sustained fire role. 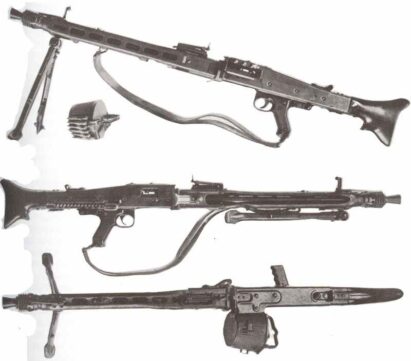 The German MG42 in its light machine gun role. 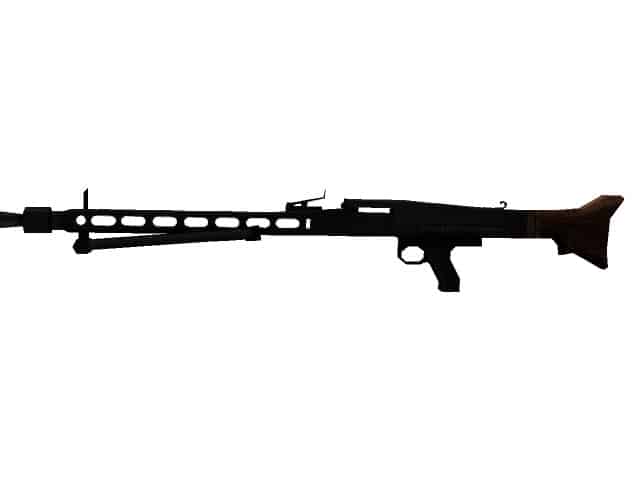 3d model of MG42 with pipod

Through the use of the MG 34 and MG 42, an infantry platoon of the Wehrmacht reached about a firepower surplus of 1.6 against their opponents, which clearly affected the fighting power and was responsible for a considerable portion of the Allied infantry losses. Considering that the majority of all battles over hundreds of front miles are mainly carried by the infantry, a considerable advantage for the German troops.
On the Omaha Beach at the Allied invasion of Normandy on June 6, 1944, a single machine gunman with 5 men in support was responsible for 2,000 losses from the American troops.
The machine guns MG 34 and MG 42 caused more losses to the Allies than all so-called ‘wonder weapons’ from the King Tiger, V-1, V-2, Me 262 jet fighters to the Type XXI U-boat together.

It has been reported that 750,000 (confirmed are 414.964 for the Wehrmacht; without Waffen-SS and other arms) MG42s were made before the war ended.
However, the MG42 never completely replaced the MG34 as planned. Both models were built until the end of the war, so that the MG42 merely added the MG 34, though energetically!

At the war’s end many countries who seized stocks of the guns adopted them into their own armies, among them France and Yugoslavia, and when the German Bundeswehr was reconstituted and required a machine gun they simply put the MG42 back into production in 7.62 mm NATO caliber as the MG1. An interesting point about this is that the original engineering drawings were destroyed at the end of the war, and the draftmen had to obtain an MG42 from a museum in the USA, strip it, and produce fresh drawings to guide manufacture.