This basic Italian army rifle was developed at the Turin Army Arsenal in 1890 and the names given to it tend to be a little misleading. In fact the only Mannlicher feature of the weapon is the magazine, using a 6-round clip; the only feature attributable to Carcano is the safety catch; while General Parravicino’s name appears to have been attached from courtesy, he was the officer in charge of the commission charged with development of a new rifle design. As for the rest of it, it might just as well have been called ‘Mauser-Carcano’, since the general effect is that of a modified Mauser rifle.

The Mannlicher clip system perhaps warrants some explanation. Although almost everyone calls them ‘clips’, most rifles load from what are properly called ‘chargers’; metal clips which grip the bases of the cartridges and from which the rounds are stripped by thumb-pressure into the magazine, after which the charger is discarded. All Lee-Enfield and Mauser rifles use this system. In the clip system, the clip remains attached to the rounds on loading and forms an essential part of the magazine system, a follower arm forcing the rounds out of the clip and presenting them in turn to the bolt for loading. When the last round has been loaded, in the Mannlicher system the clip drops through a hole in the bottom of the magazine. With the M1 Garand, the only other clip-loader in use during World War II, it will be recalled that the clip is ejected after the last shot has been fired.

On the whole the M1891 was a serviceable enough weapon and on a par with its contemporaries, and it served as a basis for a host of variations over the years. Its principal drawback was the somewhat weak 6.5 mm cartridge which it fired; the Italians became aware of this deficiency and in 1938 introduced a 7.35 mm cartridge which they hoped would replace the 6.5 mm. Unfortunately their financial masters thought otherwise, and the planned change of caliber never took place to the extent they had hoped for. A few rifles and carbines in 7.35mm were eventually issued, but the 6.5 mm weapons were by far the most common throughout the whole of the war.

There were numerous variant models, only two of which were of significance to the infantry:

Carbine M1891/24: After World War One the Italians decided to fall in line with the major powers and do away with the separate ‘long’ rifle and carbine models; the 1891 rifles were cut down to a barrel length of 17. 7in, the bolt handle bent down and the sights improved. This then became the standard army rifle.

M1938: The introduction of the 7.35 mm cartridge demanded a slight re-design since it was too powerful to be fired comfortably through a barrel as short as that of the 1891/24. A new rifle with a 21in barrel but otherwise much the same as the 1891/24 was developed. With the failure of the 7.35 mm changeover, numbers of this pattern were made in 6.5 mm caliber; they were probably the best Mannlicher-Carcano rifles ever built. US President Kennedy was shot in 1963 with one of these rifles.

Users: Italy (for all variants). 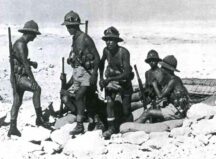 Paratroopers of Folgore Division emerge from a dugout, probably at Alamein. Most are armed with Mannlicher-Carcano M1891 or 91/38 carbines with folding bayonets, one with a Beretta M1938A sub-machine gun. 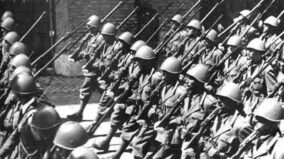