The 9-mm Parabellum Model 1908 is one of the ‘classic’ pistols and is mostly known under the name Luger, after its developer Georg Luger. The design was based on a previous pistol, the Borchardt, but Luger reworked this rather unwieldy design and developed it into the model produced by Deutsche Waffen- und Munitionsfabriken (DWM) from 1898.

The Borchardt used for the first time the toggle joint system for the looking and other mechanical characteristics of a pistol, which worked somehow, but was not very satisfying. Luger refined the mechanism mainly by rearranging the mainspring, which was a kind of coiled watch spring and became a flat leaf spring in the rear corner of the handle. This changed the overall shape of the weapon and made it much better balanced.
Further improvements followed, changing the mainspring to a spool and increasing the original caliber from 7.65 mm to 9 mm to make the cartridge more effective in combat.

The first Luger pistols were sold to Switzerland in 1900 and were intended for the 7.65 mm caliber. Until 1904 the caliber was changed back to 9 mm Parabellum and this version was adopted by the German Navy. From the model 1904 for the German Navy about 64.950 pieces were built until the Second World War.

Then in 1908 a slightly modified model was also accepted by the German Army and afterwards the Pistol 08 was manufactured to hundreds of thousands.
The gun was introduced widely between 1906 and 1914 by various armies – e.g. Bulgaria, the Netherlands, Portugal and Turkey – and tested in various other armed forces and was almost adopted by the US Army as the standard .45 caliber pistol in 1908. For this reason, even today, some are still in use worldwide and the last regular military use of the Luger pistol was with the Portuguese army in its colonial wars in Angola and Mozambique.

The original manufacturer, Deutsche Waffen- und Munitionsfabriken (DWM) in Berlin, was followed by the Königliche Erfurter Waffenfabrik, Simson Suhl and Mauser in Oberndorf. It was built for the Swiss army in the weapons factory in Bern.

These early models were built with a range of different barrel lengths, the shortest being 4.055in (103 mm) long. Other barrels had 152 mm, 203 mm and even 305 mm. These long-barreled versions were usually delivered with wooden shoulder pieces and were known as ‘Artillery models’ (see picture at the top). The ‘Long Pistol 08’ (LP.08) or ‘Artillery Pistol’ was introduced in 1914 and had a 200 mm barrel with adjustable sliding visor and wooden stop stock. They were often used from 1917 with ‘snail’ magazines with 32 cartridges and about 250.000 are said to have been built.

All these versions of the Model 1908 pistol used the same mechanism, an upward opening toggle lock. When the pistol is fired, all hinge elements of the knee lever are in a row to close the breech. The recoil forces must overcome the mechanical forces of the switching mechanism before it opens. Once open, the cartridges are ejected and reloaded. A return spring in the handle returned everything to its starting position to fire the next shot. 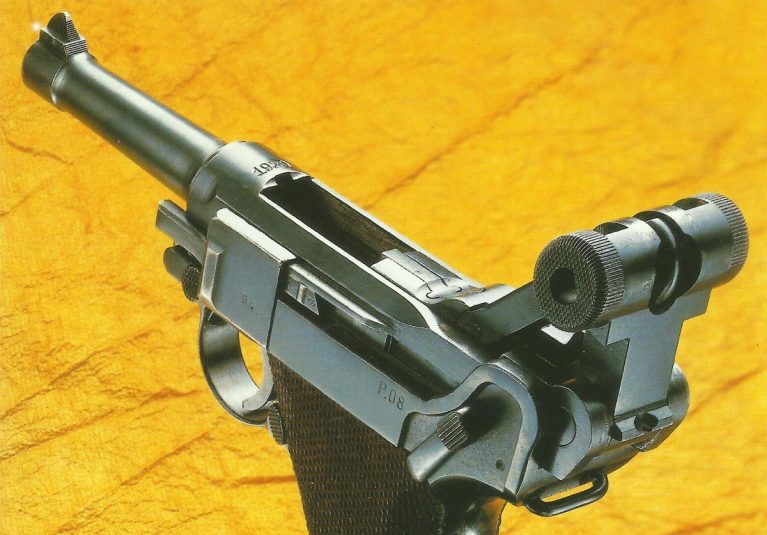 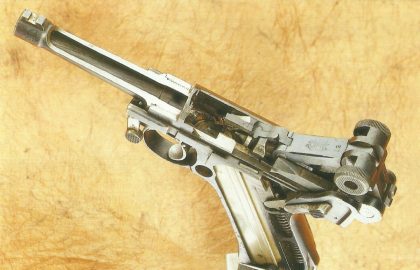 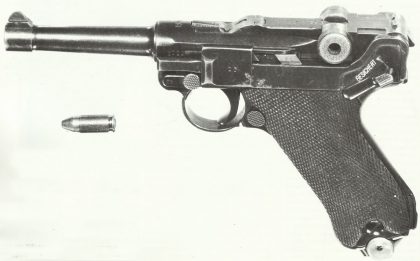 Pistol 08 in loaded condition with cartridge

This switching device gave the 08 pistol a unique appearance and the tilt of the grip gave the pistol good characteristics for aiming and shooting. The Pistol 08 therefore quickly became a sought-after weapon at the front and war trophy proximity. Already during World War One there could never be enough Pistols 08, in order to cover the constantly rising need and demand among the soldiers.
In this connection the disadvantages of the Luger pistol became clear, because it was difficult to produce in larger numbers, since nearly all its components had to be manufactured in complex manual work. Until 1917 a good part of the excellent workmanship of the pre-war models was lost and so also the original grip was lost – and never came back, not even after 1918.

A further disadvantage of the Pistol 08 is the fact that the switching mechanism suffered a lot under the conditions of the trench warfare. Mud and dirt could limit the function only too easily, which happened in addition mostly still in the most unfavorable moments of the emergency. Therefore, the treatment of the pistol required a lot of attention and care. The quality of the ammunition is also important for the effective use of the pistol.

However, this did not seem to prevent the soldiers from using the 08 pistol, since for most of them these problems turned out to be minor in practice. Thus, even after 1918, the use of the pistol continued.
With the expansion of the Wehrmacht, the problem of the simple mass production of the Luger pistol was once again in the foreground, and so the introduction of a replacement weapon, the Walther P38, began in 1938.
The Luger pistol was nevertheless built for the German army until 1942 and for export in the following year, with the last output in 1944 being delivered to Portugal in 7.65 mm caliber.

Presumably more than four million civilian and military Parabellum pistols were built. The German army received about 1.5 million of them by 1918. In the years between the world wars another 400,000 pistols were built and from 1939 to 1942 another half a million for the Wehrmacht.

The Pistol 08 was widely distributed within the German army. With the infantry it was the handgun of the officers and was also carried by gun crews, messengers, signallers and non-commissioned officers. It saw widespread use in combat until the end of the war, although there are few reports of lethal effects. However, it was considered a highly valuable souvenir by Allied soldiers, and many thousands are still privately owned.

Even today, some weapon manufacturers find it worthwhile to give their products the appearance of the Luger pistol or even make direct copies for a still obviously unsaturated market. This is why the Luger pistol is still used in various armed conflicts around the world.