Back to Part I: FG 42 (Fallschirmjaegergewehr 42)

Manufacture and service of the Fallschirmjaegergewehr 42

For the Fallschirmjaegergewehr 42 (parachute gun 42) most of the parts were punched from sheet metal. The first models had a muzzle brake and folding bipods as well as a bayonet, which was rotatory installed in a bracket.
Although the weapon was cheap from material and revolutionary designed, it was however only elaborate and with many work steps to manufacture.

This was the reason, that only a relatively small number were made – 7,000 is generally quoted – since during the development priorities had changed.
Of this, about 2,000-2,100 Fallschirmjaegergewehr 42 rifles of the first model E have been produced. Subsequently, in Version F, the bipods were fixed further forward and additional simplifications were introduced. In the subsequent version G, a simple wooden shaft was used, and the pistol grip was replaced by a more orthodox component. Of the models F and G about 5,000 units were produced up to the end of the war.

The airborne invasion of Crete, while providing the Paratroops with a useful case for having the weapon, had also shown that such operations were too expensive to be repeated, and the airborne forces spent the rest of the war fighting as conventional ground forces; albeit with high military performance due to their long and excellent training.
Moreover, the production facilities were controlled by the Army Weapons Bureau, who were reluctant to allot factory capacity to a weapon which they considered superfluous. Already the development had to be commissioned by the company Rheinmetall-Borsig, since at that time they belonged to the Reichswerke Hermann Goering, the commander-in-chief of the Luftwaffe.

It is said that the first use of the FG42 was in the raid to release Mussolini in September 1943.
Subsequently, it was used by the parachute units – the ‘Green Devils’ feared by the Allies – in the fights around Monte Cassino in Italy.

The Fallschirmjaegergewehr 42 proved so successful that the ground forces of the Luftwaffe constantly demanded more weapons, which was hardly possible due to difficulties in the manufacture.
The majority of weapons were issued to units on the Western Front, large numbers being captured by Allied troops in 1944 at Normandy, which gave rise to the belief that the weapon was being produced in greater numbers than was the case.

The Fallschirmjaegergewehr 42 was far ahead of its time, and after WW2, many of its features and ideas were used in later designs, and are still contained in many assault rifles.

The FG42 as made by Krieghoff. 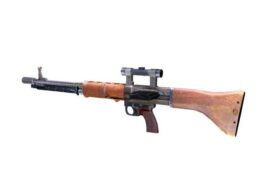 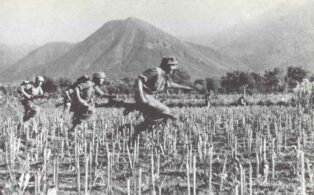 Paratroopers are capturing the Gran Sasso base station during the operation ‘Eiche’ (oak), the rescue of Mussolini. 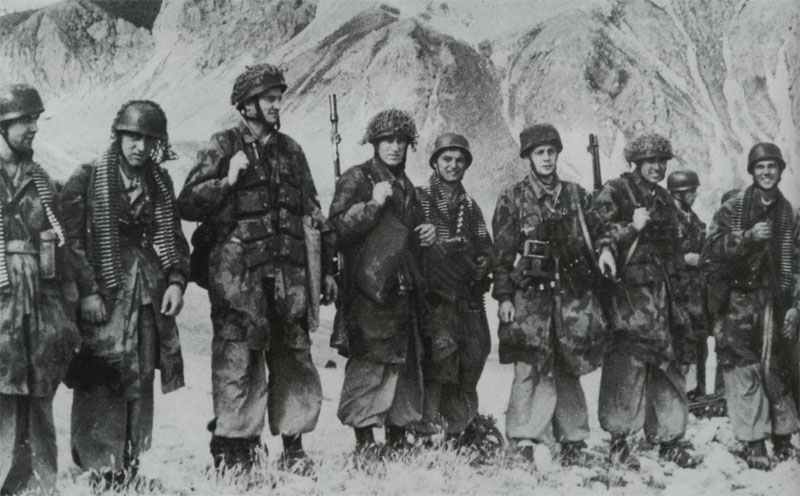 The paratroopers which participated in the rescue of Mussolini. Several of them carry belt of MG42 ammunition and at least two are armed with the new FG42.

Video about shooting with the Fallschirmjaegergewehr 42

back to Part I: FG 42 (Fallschirmjaegergewehr 42)