The Mauser 98K was the last of the long line of Mauser rifles used by the German Army and based on the original Mauser Gewehr 98. This 1898 model was an improved version of that designed in 1895 for the Chilean Government and featured a third locking lug at the rear of the bolt, and a rather unusual tangent back sight in front of the chamber.
With Britain’s adoption of the Short Lee-Enfield in 1903, and the American introduction of their ‘short’ Springfield, the German Army, seeing the sense of the idea, developed a short version of the Gewehr 98, calling it the Karabiner 98; this was slightly confusing, because they had already produced a ‘proper’ carbine version and called it the Karabiner 98, but since the new short rifle rapidly replaced the carbine, the anomaly did not last for long.

The principal change was, of course, the logs of six inches from the barrel, but the bolt handle was also turned down and the wood of the stock beneath cut away to allow the bolt to be grasped more easily. The real sight was also simplified. This became the standard infantry weapon during World War One and afterwards completely replaced the Gewehr 98 rifle; in its postwar version it was re-Christened the Karabiner 98a.

During the early 1930s one or two small changes were made in the design, largely, as usual, to facilitate mass-production, and the resulting weapon was adopted as the standard rifle for the new Wehrmacht in 1935 as the Karabiner 98k. It was produced by the million in a number of factories, and production continued until the end of the war in 1945, since the development of automatic rifles, like the Sturmgewehr 44, never reached the point at where the production of the Mauser 98k rifles could be terminated. 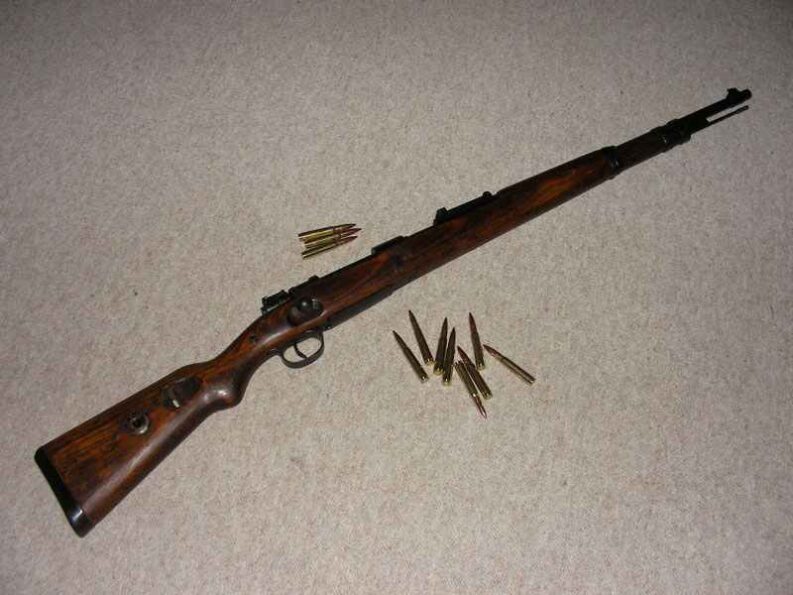 Original Mauser 98K from 1944 (manufactured by Steyr-Daimler-Puch) with cartridges. The weapon is still in good condition and ready to fire rounds. 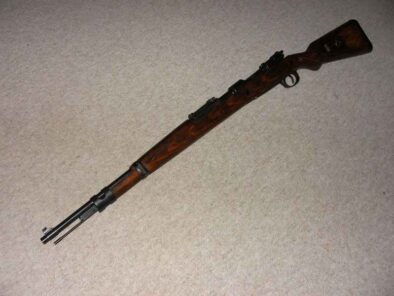 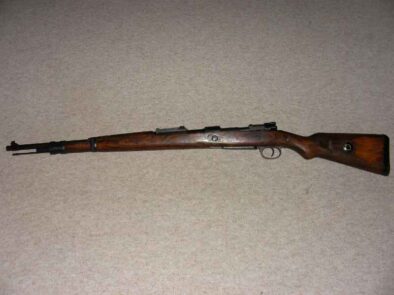 View of Kar98k left side. 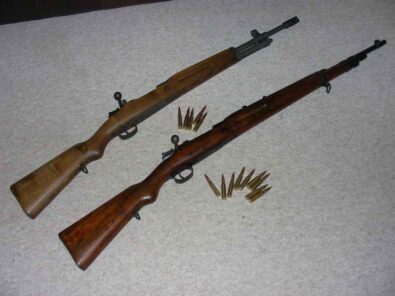 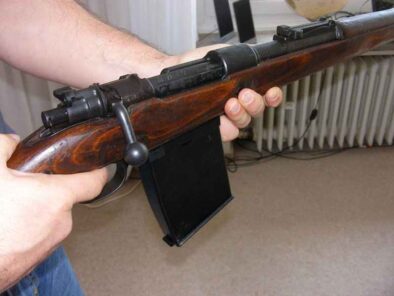 Mauser 98k with 20-round trench magazin. 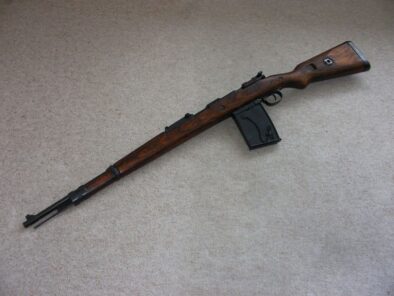 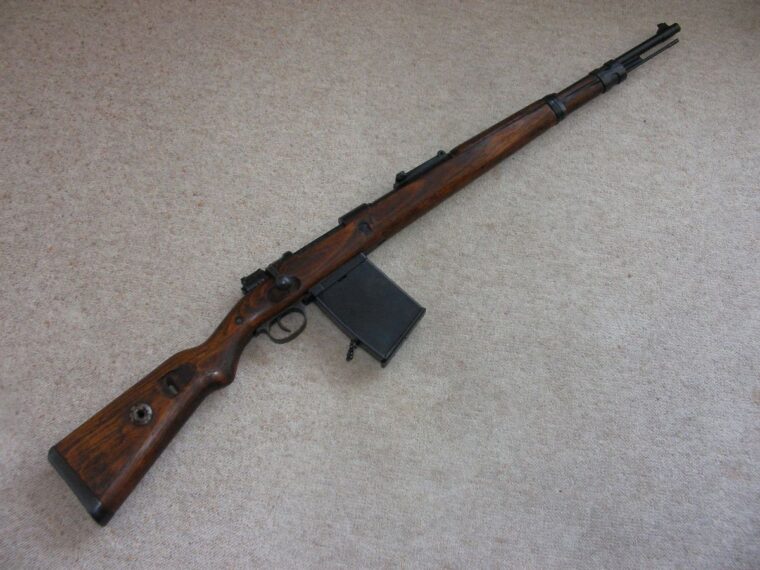 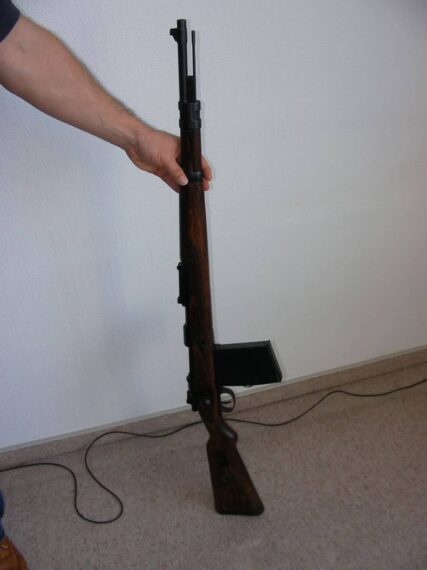 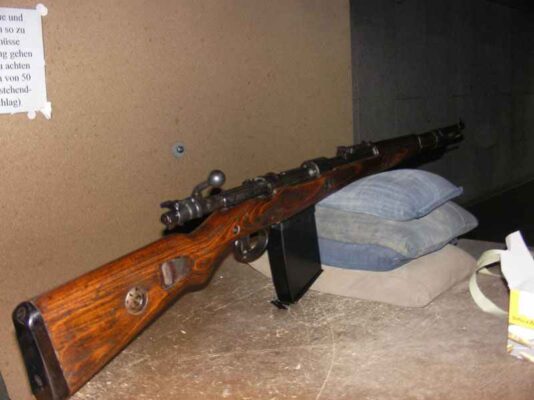 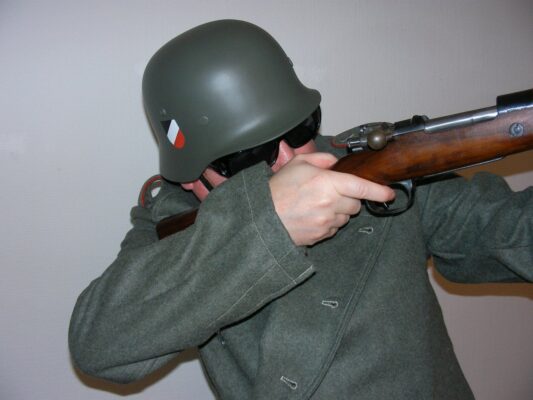 Aiming with the Kar 98k 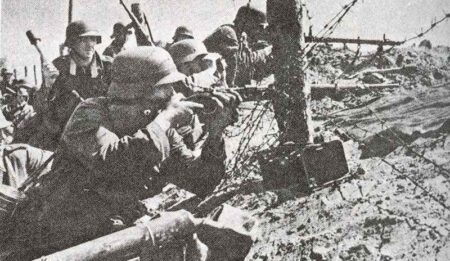 German infantry, armed with 98K rifles as well as grenade throwers, take a position near Brest-Litovsk in the first stage of Operation Barbarossa. 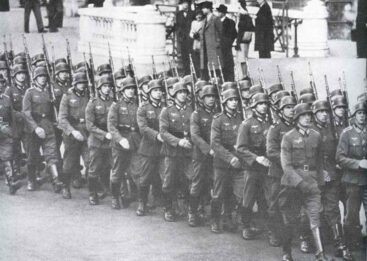 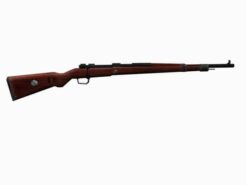 Variants:
Kar 98K/42: This appears to be a production variation (Mauser Model 33/40) of the 98K and is rarely encountered. The principal differences are that the foresight is enclosed in a tunnel, and the butt-plate is of a cupped form which encloses the end of the butt for a depth of half an inch or so. Production of 150,000 rifles from weapon factory Brno for German mountain troops and paratroopers.
Kar 98B: This bears no resemblance to the 98K. It is, in fact, no more than a Gewehr 98 rifle with its bolt handle turned down and with some improvements to the sights.

An (unfortunately too dark) video of loading and firing the Karabiner 98k.