Although the M1 Garand was the standard rifle of the US Army during WW2, many thousands of the older bolt-action Springfield M1903 remained in use. In the earlier part they were still carried by first-line troops before production of the M1 reached sufficient quantities to supply them, and later it was relegated to reserve and guard use as well as for initial training of recruits.

The M1903 was used by several Allied armies during WW2, including the Chinese Nationalist Army, the British Home Guard and Free-French Army and Resistance fighters. Many of the US troops who landed in Normandy on D-Day in June 1944 were still equipped with Springfield’s.

When the US entered the war in December 1941, the M1 Garand was neither available in sufficient quantities nor were manufacturing capacities great enough. Thus, the Springfield as M1903A3 was taken back into mass production.
This version had been simplified for faster production but was still a well-made infantry weapon. Some parts were now stamped, but the main difference was the sights, which was moved backwards.
A series of sniper rifles from the 1903A4 model were used even in the Korean War in the 1950s.

The M1903 is commonly known as the ‘Springfield’ since it was designed and developed, and largely manufactured, at Springfield Arsenal. The first magazine rifle of the US Army was the Krag-Jorgensen, but after a very few years of this weapon, work began on developing a replacement. After considering all the designs then available, it was decided to adopt the Mauser system of bolt-action and magazine, and for $200,000 the United States Government purchased a license from the Mauser company.

The original design was a long rifle with a 30-inch barrel, but while work was in progress, the British Army introduced its ‘Short’ Lee-Enfield and the US Army decided that they too would adopt this idea of one rifle for all troops. The design was modified to use a 24-inch barrel and the first models were issued in 1905.

The original bullet for which the rifle was designed was a 220 grain round-nosed pattern, but in 1905 the German Army introduced their ‘Spitzer’ or pointed bullet, which promised improved performance, and the rest of the world hurried to follow suit. The US Army adopted a 150 grain pointed bullet, and the rifle sights were modified to match its ballistics.

Although basically of Mauser pattern, there were one or two features which made the Springfield unique. The firing pin is in two pieces, the ejector is not spring-loaded, and an ingenious bolt stop allows bolt removal and acts as a cut-off, so that the rounds in the magazine can be held there while the rifle is used as a single-loader.

US Soldiers in dungarees fire M1903 Springfields on an unimproved range in 1940-41. A coach kneels on the firer’s right, observing the strike of the round as well as the firer’s body position. Note not only the sparseness of the range, but also its seize, large enough for a battalion to fire in one order. 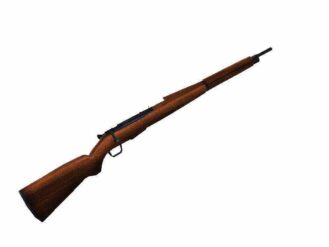 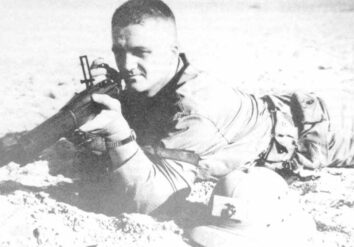 A US Marine recruit zeroes his .30-cal. M1903 Springfield rifle. Adopted by the Marine Corps in 1908, the Springfield was retained into 1943 when it was replaced by the .30-cal M1 Garand semi-automatic rifle. The Corps prides itself in its markmannship and the fact that every Marine is a rifleman first.

US Springfield M1903 rifle with bayonet. 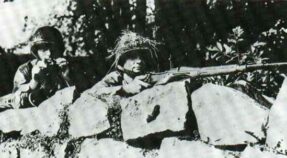 The accuracy of the M1903 made it popular weapon with sharpshooters, and in positions where a single well-aimed shot can be decisive the small box magazine of five rounds was no handicap.

The M1903 Springfield proved a fine weapon, serving into the Korean war. This sniper version had a Weaver telescopic sight, and the conventional ‘iron’ sights have been removed entirely.

M1903A1: As for the M1903 but with a new stock of pistol-grip pattern, the forward finger grooves omitted, and the surface of the trigger milled to give surer grip.

M1903A2: A proposed barrel and action fitted into a special mounting for use as a sub-caliber training weapon for tank guns. The requirement was subsequently cancelled.

M1903A3: The rear sight was moved back to the rear of the receiver. Various small changes were made in construction to simplify and speed up manufacture. This model may have a straight or pistol-grip stock, and may have a barrel with only two rifling grooves. The design was standardized on 21 May 1942 as not enough M1 Garand rifles were available and production of the rifle had to restart.

M1903A4: As for A3 but with a Weaver 330C sighting telescope and the iron sights removed. The bolt handle was also modified by cutting and bending so that it did not foul the telescope when operated. Like many bolt-action rifles with telescopes mounted centrally, this could only be used as a single-loader, since the location of the telescope prevented the magazine from being charged by the usual charger system.

Users: US Army (front-line use until 1944) and Marine Corps (until 1943), British Home Guard, Chinese Nationalist Army, Free-French Army and Resistance.