As early as 1918, the American scientist and experimenter Goddard developed a small rocket launcher from which a small projectile could be fired. The idea was offered to the American and British governments, but as the end of World War One came at the same time, interest was low. In addition, a mortar could fire a larger explosive charge with less propellant and was available as a cheap weapon, which could also shoot indirectly, so that the user did not need direct visual contact to the target to hit it.

This assessment remained valid until 1941, when the idea was reconsidered. In the years between the two World Wars two new circumstances had arisen: the appearance of numerous tanks and the hollow charge warhead. In contrast to the European armies, the US Army had never introduced an anti-tank rifle or other light anti-tank weapons for infantry and the perfection of the hollow charge grenade promised a much better method of eliminating tanks with high-speed rockets.

The basic American rocket development took place since 1933 at the Aberdeen test site in Maryland. The service use of the new weapon began seriously in early 1942 and the first specimens were deployed with the American troops during the landings in Northwest Africa as part of the Operation Torch in November of this year. However, the first combat action against tanks of the Axis Forces took place only in the following year.

The official designation of the new weapon was 2.36-inch Rocket Launcher M1. At that time Bob Burns was one of the most famous American comedians and one of his props was a complex and horrible looking instruments of his own construction, which he called his ‘Bazooka’. The resemblance between this and the long tube of the 2.36in M1 rocket launcher excited the imagination of some GIs and since then all rocket launchers fired over the shoulder have been called ‘bazookas’ in America.

The Bazooka was a very simple weapon, nothing more than a steel tube open at both ends through which the rocket was fired. A shoulder rest or wooden stock was attached together with two handles for aiming. The rear handle also contained the trigger.
The rocket was ignited electrically and at low temperatures not all propellants were used before the rocket left the launcher. The unburned powder was therefore driven into the shooter’s face and to prevent this, a small circular wire grid could be mounted directly behind the muzzle.
In practical use, the bazooka could be fired at targets up to 300 yards (275 meters), but in most cases the firing range was around 100 yards (c.90 meters).

Shortly after the Bazooka M1 was taken over by the troops, it was replaced by the largely identical model bazooka M1A1. It was a popular weapon that could take out any enemy tank and was normally used by two men. Of these, one was the shooter and the second the loader, who inserted the rocket and connected them to the electric detonators.

The bazooka was quickly used also for other roles on the battlefield. It was great for taking out bunkers of all kinds, and could even clear holes through barbed wire obstacles. It was used against unarmored vehicles up to distances of 650 yards (600 meters) and sometimes to blow up passages through minefields. There are also reports that the bazooka was used to fight artillery guns at close range.

But mainly the Bazooka set its exclamation marks against tanks, and so in early 1943 captured specimens of the weapon in Tunisia became the starting point for the German design of their anti-tank rocket launcher, called Panzerschreck. The German counterpart had a much larger caliber, while the Americans continued to maintain their 2.36 inch (60 mm) caliber until after 1945.

At that time, however, they had introduced a new model. In contrast to the M1, the new Bazooka M9 could be dismantled into two parts to make the weapon easier to transport or stow.

At the end of the war the model M18 appeared, which was made of aluminum to be lighter.
Smoke and shard rockets were developed and introduced before 1945, but mainly used in the Pacific theater of war.

Towards the end of the war a larger version of the Bazooka in caliber 3.45 inch (88 mm) appeared, but since the 2.36 inch (60 mm) version was able to do everything necessary, the ‘Super-Bazooka’ was put on ice and was not put into production until 1951 for the Korean War. The Russian T-34-85 tanks there turned the 2.36 inch model into a thing of the past overnight.

Rocket launcher M9: The improved model with a starter tube made of two parts with a bayonet catch, so that the weapon could be disassembled and transported more easily. The trigger was changed to a pulse magneto in a pistol grip. The shoulder support and other equipment were improved and the weight increased to 16 lb (7.25 kg).

Rockets M6, M6A1,2,3 etc: A number of different types of rockets were issued, with detail changes being made to the electrical contacts and wing arrangements, among other things. Used in service and in test trials for improvement. First versions had a pointed nose, from the M6A3 a hemispherical tip.
Picture right: Hollow charge rocket M6A1.

Rocket M10: This rocket had a warhead with white phosphorus to form a wall of fog or for use against infantry. 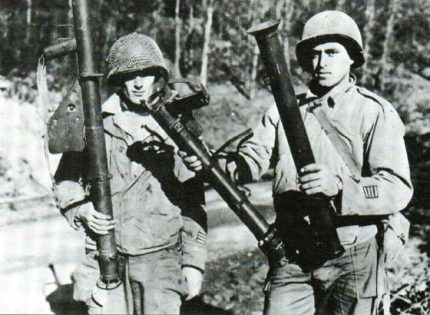 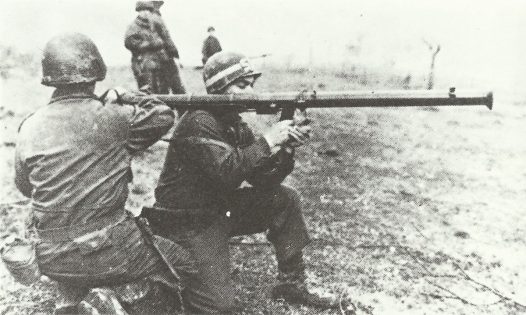 Demonstration of the M9A1 Bazooka 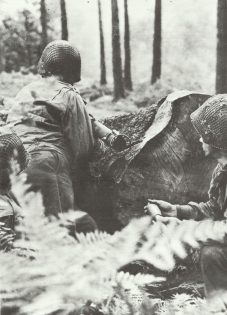 US soldiers wait with a bazooka for German tanks in Normandy, 1944 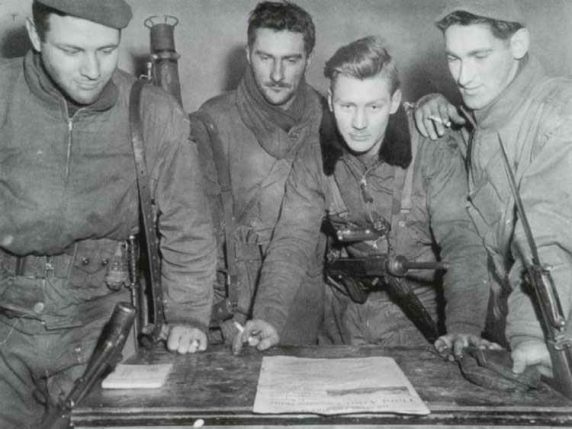 Officers of the 5th US Ranger Bn at Germany in 1945 with a Bazooka, a .30cal machine gun, two M1 Garand rifles, an M3 Grease Gun and a Thompson sub-machine gun, taped grenades and a captured German P08 Luger. 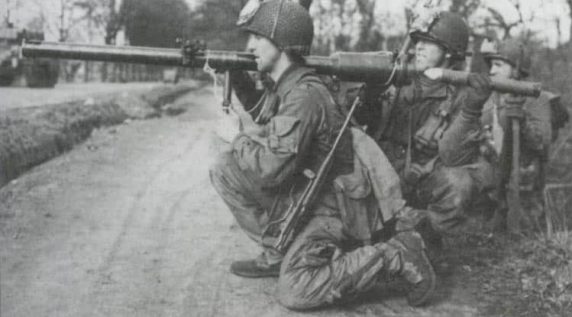 US paratroopers preparing a Bazooka after their dropping east of the Rhine. 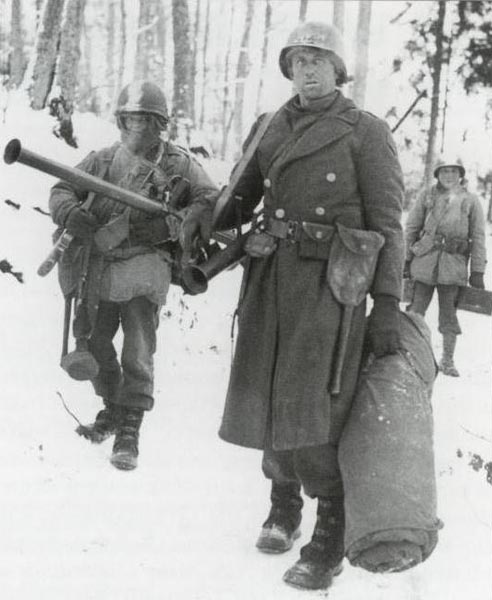 These three GIs, of whom tow are carrying a bazooka , are coming in from manning a night roadblock in the Ardennes. 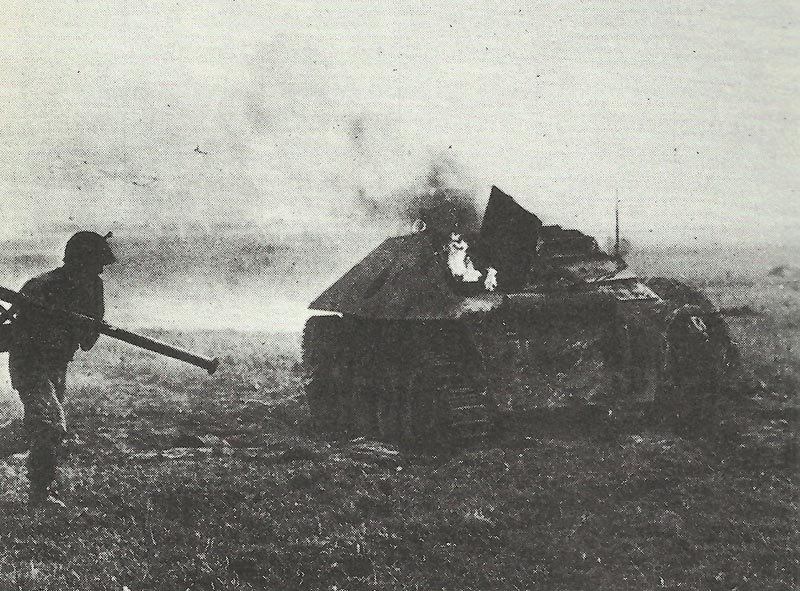 Near Aachen a US soldier has destroyed a Hetzer tank destroyer with a Bazooka .