The first of his machine guns Colt-Browning Model 1895 went in action with the US Navy Corps during the campaign on Cuba in 1898. Some were also sold to Belgium and Russia, but at the outbreak of the First World War, the 1895 model was already outdated. Nevertheless, about 100,000 pieces were built by Colt during the war. Of these, only a few were used by the US forces, but they were used by Belgium and Russia. Some Russian specimens were even used by the Red Army in 1941.

As soon as the Colt-Browning Model 1895 machine gun was in production, Browning began work on a new recoil-based weapon.
To the detriment of Browning, the American military authorities at that time had no interest in further machine guns, assuming that they already had enough and that the available funds were scarce.
Browning submitted the patent for the new machine gun in 1901, but only in 1910 had enough funds to build a prototype. He still could not arouse the interest of the US military at this time.

So, virtually nothing happened until 1917, when the US Army finally woke up in February 1917, that possibly a war was approaching and there were virtually no machine guns. Eventually Browning was finally able to show off his new weapons, including the BAR.
But the US War Department was unable to reach a decision, and in April 1917, the US was suddenly at war with just a few modern weapons and even less usable machine guns.
The following month, Browning re-introduced the M1917 and fired a spectacular 20,000 rounds without interruption. So the ‘rediscovered’ Browning machine gun was mass-produced within a very short time as Machine-gun Caliber .30 M1917 and a contract for 45,000 pieces was agreed.

Externally, the M1917 resembled other machine guns of that time, especially the Vickers Gun. However, the M1917 was completely different as it used a mechanism called a ‘short recoil system’. There, the recoil force generated when the cartridge is fired pushes the barrel and breech block back to the end of the weapon. After both the barrel and the bolt have been pushed back a short distance, their movement is stopped and a pivot lever as an accelerator pushes the bolt backwards.

During this movement, a series of cams also lead to a further movement of the belt mechanism, which brings another cartridge into the chamber. A return spring now pushes the bolt forward on the barrel and fires the cartridge off and the whole process begins again from the beginning.
This basic mechanism was retained for all further designs of Browning machine guns, from the air-cooled 7.62-mm (0.3in) to the large 12.7-mm (0.5in) M2 weapons.
Apart from the internal mechanics, another point that distinguished the M1917 from the British Vickers MG was the firing grip, for the Browning had a pistol grip and a conventional trigger. A closer look at the two types of machine guns leads to many more differences, but gun grit in Browning is the most obvious distinguishing feature.

The M1917 was immediately put into production in several factories, and it was manufactured in such quantities that no fewer than 68,000 could be completed by the end of the First World War.
Not all of them reached the troops in France before the armistice, but after 1918 the M1917 became the American standard machine gun and remained in service until well after World War II.

After 1918, minor changes were made in the light of the fighting experience in France, but these were not significant. These included a new baseplate, various parts made of steel rather than bronze, and an improved water cooling system. The whole thing was now called M1917A1.
A more dramatic change occurred only a short time later, when the water jacket was completely removed and the M1919 was created. 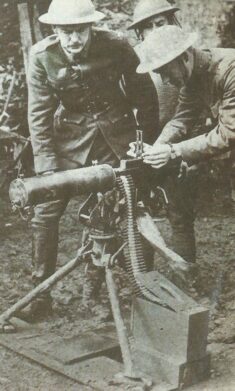 Instruction of American soldiers during the First World War for the Browning M1917. 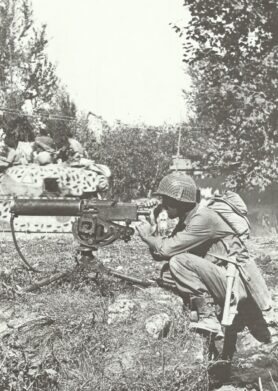 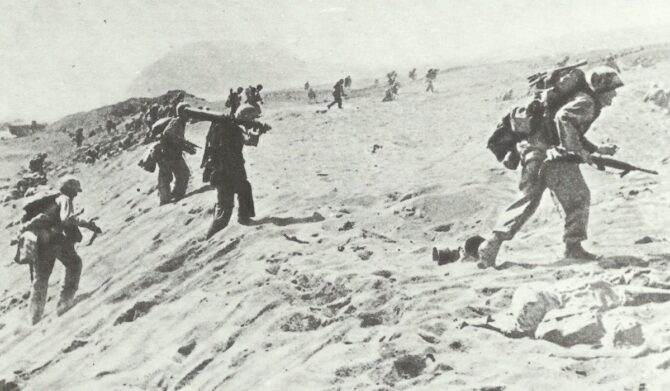 After landing on Iwo Jima in 1945, a US Marine carries a Browning M1917 machine gun across the beach.

During the battles in 1918, the M1917’s use on the battlefield proved relatively easy, and despite the haste with which it had been put into production and delivered to the troops, few problems seemed to have become known. Relatively few M1917 reached the US front troops in France before the armistice, although many were on the way there.
Those who arrived were intensively used, as the M1917 was one of the few, pure American weapons of the US troops. The US soldiers otherwise only had their Springfield rifles, a few BAR‘s and other equipment they had received from their homeland. It was good for their morale in this situation that the M1917 turned out to be an excellent weapon design.

The Polish armed forces chose the proven Browning M1917A1 as their heavy machine gun. They bought two of them and built them virtually unchanged and without a license in the Warsaw Arms Factory as their Model 1930.
The weapon was water-cooled, mounted on a tripod and the ammunition was inserted through a cartridge belt.

A total of 7,861 machine guns were manufactured, most of which were used by Polish armies in 1939 at the outbreak of World War II. Some had previously been sold to Romania and Spain.

The Browning M1919 series differed from the earlier M1917 series in that the original water-cooled barrel was replaced with an air-cooled barrel.
This air-cooled model was originally intended for use in the many tanks the Americans wanted to build. The end of the First World War meant that the orders for this tank and the original M1919 machine gun were canceled.

But this air-cooled Browning was further developed to the M1919A1, and then to the M1919A2 for the cavalry and then to the M1919A3. The produced quantities of these models were never very big, but with the perfection to the variant M1919A4 in the thirties of the last century this changed. By 1945, the production then amounted to 438,971 pieces and after the end of the Second World War, it was still being built.

The M1919A4 was primarily made as an infantry weapon and proved to be a first-class heavy machine gun capable of discharging enormous numbers of shots, putting away any kind of bad or hard handling.
As a partner for the infantry version, a special version was produced as M1919A5 for installation in tanks. There was a special version for the US Air Force as M2 for rigid installation in the wings or as a mobile machine gun for gunners. Also, the US Navy had its own version, which was based on the M1919A4 and called AN-M2.

Among all these types and with such a long production time, there have been many minor and major modifications and production changes, but the basic design of the M1919 has always been retained.
The basic M1919 used a cartridge belt feeder made of cloth or bonded with metal flakes. Usually it was mounted on a tripod and there were many modifications, from the ordinary infantry tripod to large and complex anti-aircraft fire platforms. There were ring and boom type mounts for all types of motor vehicles, from jeeps to tankers, and there were numerous special mounts on all types of small boats.

Perhaps the strangest of all M1919 variants was the M1919A6. It was produced as a form of light machine gun to increase the firepower of the infantry, which until its introduction relied entirely on the BAR and the rifle. The M1919A6 was an innovation from 1943 and was basically an M1919A4 with an unfortunate looking shoulder piece, a bipod, a carrying handle and a lighter barrel.
The result was a rather heavy ‘light machine gun’ which only had the advantage of being able to be produced promptly in existing production facilities. The disadvantages were the general unwieldiness of the weapon and the need to wear a mitten when the hot barrel had to be replaced.

The unfortunate draft was adopted in February 1943 as a ‘restricted standard’. However, the M1919A6 was made in large quantities and 43,479 pieces were produced. The troop had to come with right and for most soldiers it was after all better suited than the BAR in the role of the light machine gun.

However, if there was a commonality for all versions of the M1919 machine guns, then it was their reliability. These weapons still worked in conditions where most other designs – with the possible exception to the Vickers MG – no longer did.
They all had the same basic recoil method, in which the orifice gases forced back the entire barrel and recoil mechanism until a bolt accelerator at the rearward point activated the springs, which reset the entire mechanism and triggered the next shot.

The M1919 machine gun series, including the ugly M1919A6, is still used worldwide, but mainly as standard weapons only in a few Armies of South American countries in the meantime.