In the summer of 1940 the British Government began to look seriously at the sub­ machine gun question, and in August a decision was taken to put into production a copy of the German MP28 from World War One, an order for 50,000 weapons being contemplated. At the same time an order for 110 million rounds of 9 mm ammunition was placed in the USA, since the manufacturing capacity for this caliber in Britain was then negligible. An acceptance trial of the new weapon, known as the Lanchester, was carried out on 28 November 1940 and arrangements for production were put in hand. Then, in the first few days of January 1941, the situation changed. A simplified weapon, designated the ‘N.O.T. 40/1’ was produced by Major R. V. Shepherd and Mr. H. J. Turpin of the Chief superintendent of Design’s department. It was demonstrated at the Royal Small Arms Factory at Enfield Lock on 10 January 1941 and again on 21 January, whereupon instructions were given for an immediate trial and a rapid decision whether the manufacture of the Lanchester should proceed as planned or whether its production should be curtailed in favor of the new design.

As the Ordnance Board pointed out the following day, ‘the most important consideration at the moment seems to be to get some form of machine carbine acceptable to all three services into production as quickly as possible.’

The N.O.T.40/1 was tested and a report submitted on 31 January. The various tests were passed satisfactorily, 5400 rounds being fired without breakages or malfunction. The report concluded by saying, ‘This carbine appears to be fundamentally sound and functions satisfactorily and accurately.’ Arrangements were then made to organize production and the first weapons began to come from the factories in June 1941.

The result of all this effort was the Sten Mark 1. While it was a simple weapon, it still had a certain amount of refinement; there was a wooden fore-end and a folding grip for the forward hand, a barrel jacket and protectors for the foresight, and a flash hider-cum-muzzle compensator. A safety slot at the rear of the cocking handle slot allowed the lever to be turned down and locked as a rudimentary safety measure.

Once production began it was appreciated that some of this refinement could be shorn off, thus both speeding production and lightening the gun. The flash hider and fore-grip went, and the wooden fore-end replaced by a sheet metal cover over the trigger mechanism. This became the Mark 1. But further simplification was possible, and a Sten gun Mark 2 version, probably the most common of all the Marks, soon entered service. This dispensed with the barrel jacket, retaining the barrel by a large perforated sleeve which doubled as a forward hand grip; the magazine housing was modified so that it could be swung down through 90 degrees to close the feed and ejection openings against dirt; and the safety slot was repositioned at the top rear of the cocking handle slot, since turning the handle up to lock was an easier movement than turning it down. Over two million of this pattern were made, and at one stage they were being turned out at a rate of over 20,000 a week from one factory alone, and the price of manufacture was down to £2.87 per gun. The Mark 2 was first used in action during the Dieppe raid of August 1942, and though the raid was a fiasco there were no complaints about the part the Sten gun played in it.

Next came the Mark 3; even easier to manufacture, this dispensed with the removable barrel and movable magazine housing, containing everything within a welded steel tube with a stiffening rib along the top which also aided quick sighting.

A Mark 4, intended for Airborne troops was next designed but never put into production, and in 1944 the Mark 5 was issued. This was rather more carefully made than the previous marks and had a wooden butt and pistol grip. The muzzle and front sight were of the same pattern as those of the Number 4 rifle, allowing a bayonet to be fitted. This model was first issued to Airborne troops and had its baptism of fire at the Battle of Arnhem, after which it became the standard issue model and gradually replaced the earlier versions. A silenced version of the Mark 2, known as the Mark 2S was developed for Commando use, and there was also a silenced version of the Mark 5, the Mark 6.

The Sten was a highly successful weapon; its introduction was greeted with some reserve by soldiers who were accustomed to more elegant products, but its performance in battle showed that looks count for little, and the initial misgivings soon died away. It was not without its defects; perhaps the worst was the design of the magazine, which was never entirely satisfactory and unless carefully looked after was prone to deformation of the lips and consequent misfeed. But in spite of this it was one of the most effective submachine guns of the entire war, and countless thousands are still in existence around the world. It was copied extensively; resistance and partisan groups in Europe manufactured their own versions, using a parachute-supplied Sten as their pattern; the German Army copied it, with some slight modification, calling it the MP3008; and perhaps the most remarkable of the wartime copies was a German forgery, complete even to the Enfield inspector’s stamps, intended for issue to German guerrilla forces intended to harass the Allied troops in Germany. Since WW2 laudable copies have been seen from China, Kenya, the Northwest Frontier of India, Cyprus and Indonesia, all made in primitive conditions by irregular forces. Imitation, after all, is the sincerest form of flattery. 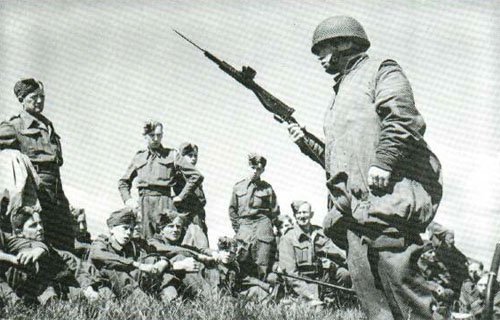 A Sten with spout bayonet is demonstrated to the new established British airborne troops.

The British Mark 2 Sten gun (above) compared with the German copy (bewlow), produced for use by Werewolves guerillias. 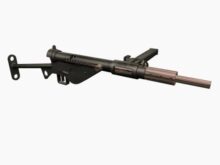