Named in honor of the fearless US Army Air Corps officer who was court-martialled in 1924 for his tiresome (to officialdom) belief in air power, the B-25 – designed by a company with no previous experience of twins, of bombers or of high performance warplanes – was made in larger quantities than any other American twin-engined combat aircraft and has often been described as the best aircraft in its class in WW2 .

The B-25B had twin 0 5in MG in an electrically driven dorsal turret and a retractable ventral turret, the tail gun being removed. On 18 April 1942 16 B-25Bs led by Lt-Col Jimmy Doolittle made the daring and morale-raising raid on Tokyo, having made free take-offs at gross weight from the carrier Hornet 800 miles (ca. 1,287 km) distant.

Extra fuel, external bomb racks and other additions led to the B-25C, supplied to the RAF, China and Russia, and as PBJ-1C to the US Navy. The B-25D was similar, but at the new plant at Kansas City.

First model with the slow-firing but punchy 75mm gun was the B-25G. 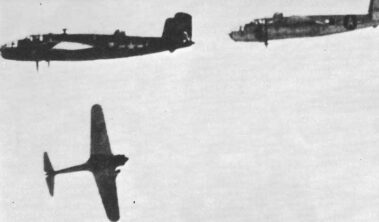 Japanese fighter shot down by B-25 Mitchell bombers over Guadalcanal. 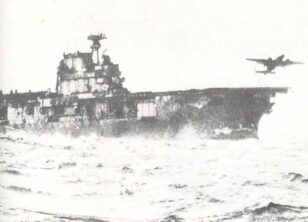 B-25 Mitchell launching from USS Hornet for Tokyo during the Doolittle Raid. 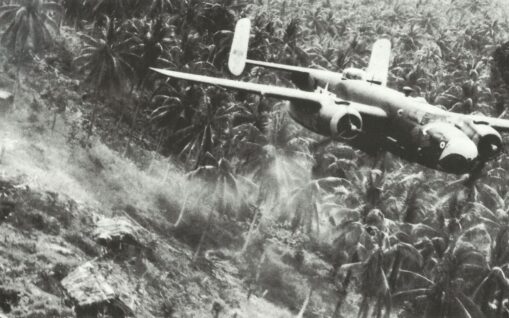 An American B-25 bomber in close above the jungle.

American B-25 Mitchells bomb a Japanese escort off Vietnam. Two were sunk there on this day. 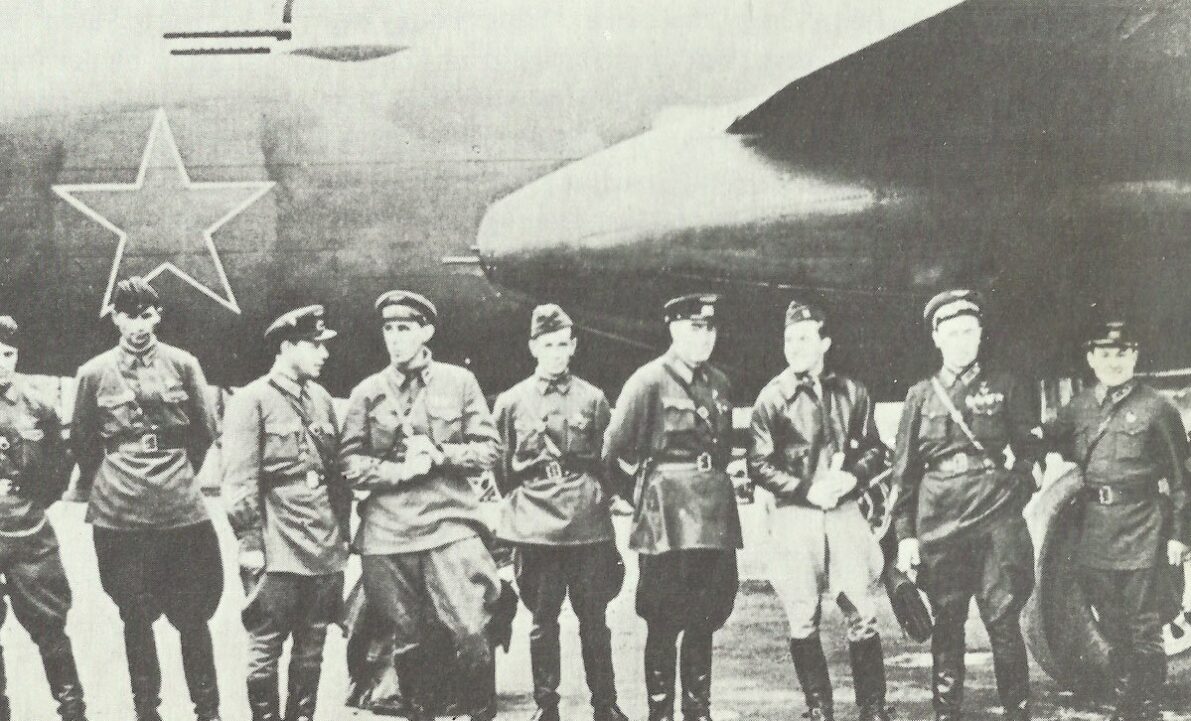 Russian air crews take over in Anchorage in Alaska Lend-Lease B-25 Mitchell bombers, which are flown over the northern route to Siberia.

In 1942 came the B-25G, with solid nose fitted with a 75 mm M-4 gun, loaded manually with 21 rounds. At first two 0.5in MGs were also fixed in the nose, for flak suppression and sighting, but in July 1943 tests against Japanese ships showed that more was needed and the answer was four 0.5in ‘package guns’ on the sides of the nose.

The F-10 was an unarmed multi-camera reconnaissance version, and the CB-25 was a post-war transport model. The wartime AT-24 trainers were re-designated TB-25 and, after 1947, supplemented by more than 900 bombers rebuilt as the TB-25J, K, Land M. Many ended their days as research hacks or target tugs and one carried the cameras for the early Cinerama films.