In quite similar way that the Beaufighter had been distributed into RAF Coastal Command as an anti-shipping strike fighter, hence the common de Havilland Mosquito FB performed valuable results in this function, made use of essentially with rocket projectiles as well as bombs. A torpedo-carrying model was under construction towards the end of WW2.

It had been after the Mosquito was already with success designed as a fighter-bomber perfectly bringing together the night-fighter cannon armament with the potential to transport bombs internally that the Mosquito FB VI was chosen for use with Coastal Command, tests being carried out at Boscombe Down with a plane equipped with 8 x 3-inch rocket projectiles under the wings. Alongside a nose armament of 4 x 20-mm cannon and also 4 x 0.303-in machine guns, the Mosquito FB Mk VI could also transport 2 short-finned 500-lb bombs in the back of the bomb bay. Nevertheless, after that plane were improved to transport additional a pair of 500-lb ordnance under the wings instead of the rockets.

Following the good results of the Beaufighter anti-shipping strike wings in 1943, a Mosquito Strike Wing was created at Banff in Scotland before the end of this year, No. 333 (Norwegian) Squadron becoming the first to were delivered Mosquito FB Mk VIs in November 1943, No. 248 Squadron accompanied within the next month, and No. 235 in June 1944. Used virtually primarily against enemy shipping off the Norwegian coast, the Norwegian pilots of No.333 Squadron in general flew as pathfinders for the wing, leading Mosquito formations along the winding fjords in the hunt for German ships.

Of increased attention than real operational benefit was the Mosquito FB Mk XVIII anti-shipping strike aircraft, armed with a primary 57-mm Molins gun in the nose. A modified Mosquito FB Mk VI in this way equipped had its first flight on 25 August 1943, after which 27 manufacturing planes were produced and joined service with No, 248 Squadron at Banff in January 1944.
Detachments were despatched south for patrols over the English Channel and on 25 March a Mosquito FB Mk XVIII pilot attacked and reported to have sunk a German U-boat off the French coast.
With a weight over 2,000 lb (ca. 907 kg), the Molins gun was not regarded effective as its recoil quite frequently resulted local structural damage in the Mosquito’s nose.
No. 248 Squadron retained its planes until February 1945, after which the survivors were passed over to No. 254 Squadron at North Coates for the remainder of the second world war. 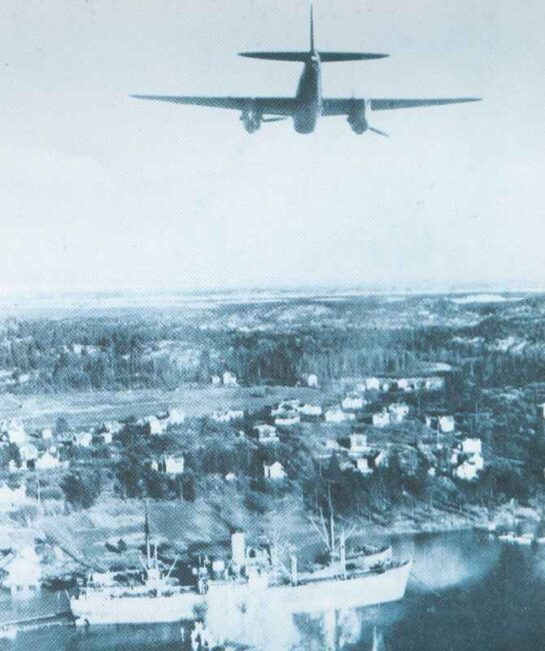 A de Havilland Mosquito FB VI attacking a ship in 1944. Cannon were used to help sight the eight rockets, which appear to have ideally below the waterline. 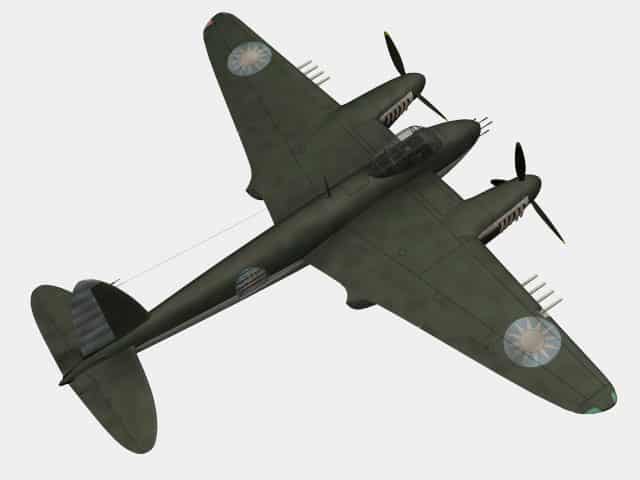 F II Night fighter : With pilot and observer side by side, flat bullet-proof windscreen, lengthened nacelles as much as all the following planes with flaps split into inner and outer segments and armament of 4 x 20 mm Hispano cannon with 300 rounds each under the floor and additionally 4 x 0.303in Brownings with 2,000 rounds each in the nose.
First flew 15 May 1941, operational service since August 1942. Afterward equipped with AI Mk IV or V radar or Turbinlight searchlight. 466 F II were build.

NF XIII : Same as Mk XII but manufactured as new, with thimble or bull nose and identical wing as Mk VI for drop tanks or other stores. Flew August 1943.