Back to Part I: Avro Lancaster Bomber (and all specifications)

An order of only 300 Lancaster bomber had been made as Mk IIs using the stronger Bristol Hercules radial power plants along with bulged bomb bays as well as a ventral turret.
The Avro Lancaster Mk II and Mk I Special had been outfitted to transport the 12,000 lb (ca. 5,443 kg) light-case bomb as well as the 12,000 lb (ca. 5,443 kg) or the 22,000 lb (ca. 9,979 kg) Earthquake bombs, the H2S radar blister beneath the rear fuselage being eliminated.
The planes of 617 (Dambusters) Squadron had been outfitted to spin and launch the Wallis skipping drum bomb.

These aircraft transported a heavier load of larger bombs compared to every other plane in the European theater. The 12,000 lb (ca. 5,443 kg) AP bomb was required to destroy the battleship Tirpitz, and the 22,000 lb (ca. 9,979 kg) bomb ultimately shook down the persistent viaduct at Bielefeld in March 1945.

The Lancaster Mk I (FE) had been outfitted for Far East missions with Tiger Force.
The Mk VI had high-altitude Merlin power plants and four-blade propellers along with turrets eliminated operated with 635 Squadron and 100 Group being a radar spoof carrier for countermeasures.
Additional models operated as maritime reconnaissance, air/sea rescue or photo-reconnaissance aircraft. 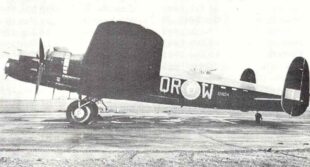 Lancaster bomber Mk II of No 61 Squadron, used from October 1942.

The 12,000-lb HC bomb could be carried by any Lancaster fitted with the bulged bomb-bay doors.

The first of the big bombs used by Lancaster bomber Specials was the 12,000 lb HC device. The main sections were filled with Torpex. The bomb required a team of four to prepare and bolt together – a procedure which took two hours and fifteen minutes, and loading took a further 35 minutes.

An Upkeen (Dambuster) mine drops away from a Lancaster bomber Special during trials at Reculver. 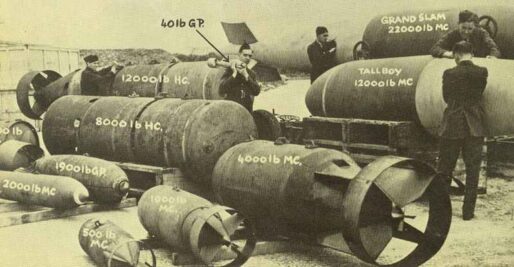 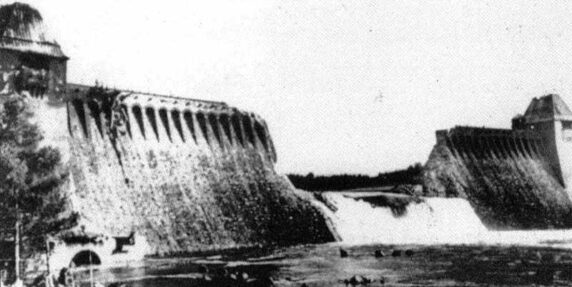 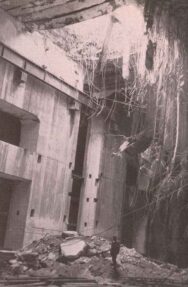 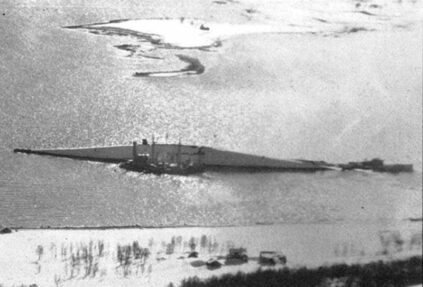 The stricken battleship Tirpitz after the 12 November 1944 attack by 31 Lancaster bombers. The ship was hit by at least six 12,000 lb Tallboys, one of which caused an explosion in one of the vessel’s magazines. 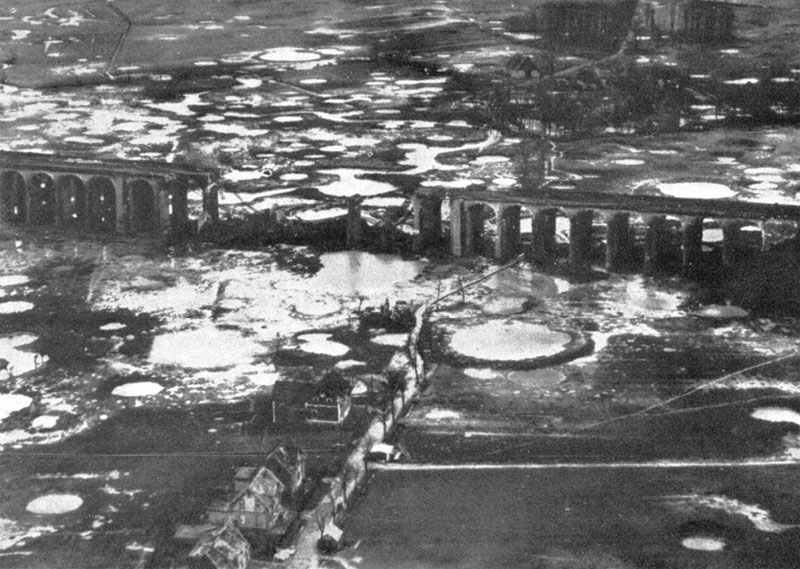 The Bielefeld Viaduct after being attacked by Lancaster Specials of 617 Sqn, which dropped one Grand Slam and several Tallboys on the structure on 14 March 1945. The large craters visible in this pictures are those left by the Tallboys, while the Grand Slam made a rather smaller hole, penetrating deep and exploding underground.


Performance of the Lancaster

The commander of the British Bomber Command, nick-named Bomber-Harris, summarized the following about the Avro Lancaster: ‘One can prefer a single Lancaster over four Halifax bombers. The Halifax suffers four times as many losses for the same weight of dropped bombs. Low ceiling and shorter range make them an embarrassment when planning attacks along with the Lancaster.’

In fact, the Lancaster suffered a higher loss rate than the Halifax during daylight attacks, which prevailed towards the end of WW2.
In addition, more of their crew members were killed when their aircraft was shot down. It is also often suspected that the crews of Lancaster bombers, because of the larger flight altitude and their uncomfortable equipment, ultimately dropped their bombs inaccurate.
Finally, although it could carry the larger bomb load, the Lancaster was less useful as a multi-purpose aircraft than the spacious Halifax, and was also less suitable for operations in the tropics.

But in Arthur Harris strategic bomber war, living bomber crews as German PoWs were no longer useful like the dead. And a much more inaccurate, but really dense bomb carpet around the ‘target’, which was the size of a whole city, was much more important.

The fact that an average Lancaster dropped 154 tons of bombs into its 27.2 mission life span and also could reach targets behind Berlin was more useful than a shorter range of the Halifax with its average 100 tons. With these advantages from an airplane, which was also cheaper to manufacture, it was inevitable that the Lancaster would be built in larger numbers than any other bomber, and that it would carry the main load of the air war.

The optimization of the Lancaster to the only role as a strategic bomber was largely a consequence of the war. The Halifax and Stirling bombers had been developed in peace time for an anticipated war effort, while the Lancaster emerged in the light of the actual events. A multi-purpose combat aircraft was not required; it was rather easy and economical to manufacture, less comfort for the crews, as well not the best security for their survival in the event of being shot-down.

Lancasters were involved in virtually every significant night strike on German cities. They quickly confirmed their efficiency by dropping average 132 long tons of bombs for each plane lost in comparison with 56 (later 86) for the Handley Page Halifax and 41 for the Short Stirling.
Near Caen in Normandy, Lancasters were operated en masse in the battlefield close-support role, and they ended WW2 dropping supplies to starving people and transporting back ex-PoWs.
The final Lancaster MR7 abandoning RAF front-line operation in February 1954.

Video about the Lancaster Bomber

back to Part I: Avro Lancaster Bomber (and all specifications)