In a long operational career the Petlya­kov Pe-2 was extremely successful in a variety of roles: heavy fighter, light bomber, ground attack, reconnais­sance and night fighter. It may well have been the most versatile Russian combat type to enter service during World War II. Over 11,000 Pe-2s were built, and the type was improved steadily throughout the war. Along with the equally effective Ilyushin Il-2 Stormowvik, the Pe-2 provided the spearhead of the Red Air Force’s tactical bomber units.

The Pe-2 project got under way in 1938, when a team headed by Vladimir Petlyakov began designing what was to be an extremely advanced aircraft for its time: a heavy twin-engined fighter with a pressurized cabin for high-­altitude combat. This was however never completed, because its specifica­tion was superseded by a call for a high-­altitude bomber instead of a fighter.

But despite the change in specification, much of the original design was kept. When the prototype appeared in 1939, its elegant lines created something of a stir, and its handling proved unusually lively for a bomber. Tests then revealed that the high-altitude sighting equip­ment was not satisfactory, and it was decided to convert the aircraft into a dive-bomber. The main alterations were a reinforced and reshaped tail­plane, and the installation of dive brakes on the wing under surfaces. It was this version of the Pe-2 that was first put into production and, beginning in 1941, first delivered to units.

An all-metal, low-wing mono­plane with twin vertical tail units and a retractable undercarriage, it was powered by 1,1OOhp Klimov M-I05Rs driving three-bladed variable-pitch metal propellers. This Petlyakov was the first Russian type in which great attention was devoted to the arrangement of the controls. In fact, it was almost overdone: there were 18 electrical servo-mechanisms and a hy­draulic system for the main controls.

The dive-bomber version was followed by a heavy fighter that could also be used for long-range reconnaissance and ground attack. Beginning in 1942, the armament and armor were changed to allow the plane to withstand the newest German fighters.

An improved version appeared in 1943. It was powered by 1,210hp M-1O5PFs and incorporated several aerodynamic and structural altera­tions. The final versions, developed late in WW2 , were a long-range reconnaissance model, a trainer and a high-altitude fighter.

Ironically it was an accident with one of these aircraft that Petlyakov lost his life in 1942. 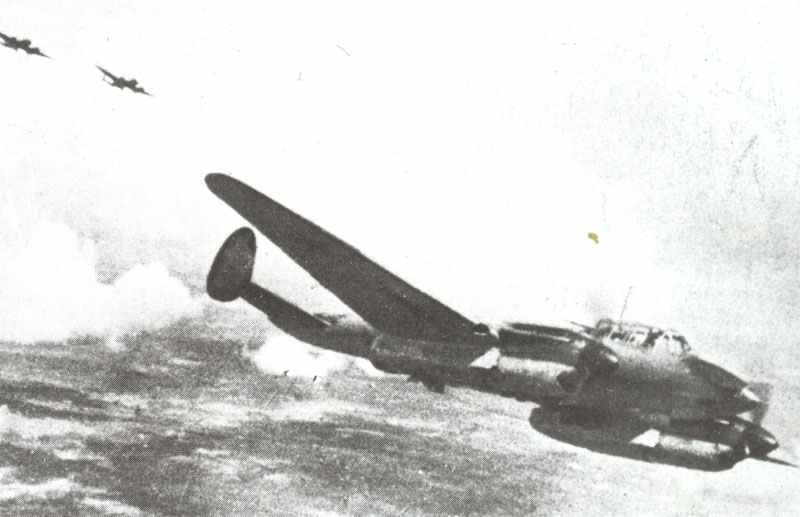 These Pe-2 examples have the lower ventral gun but no loop aerial under the nose. 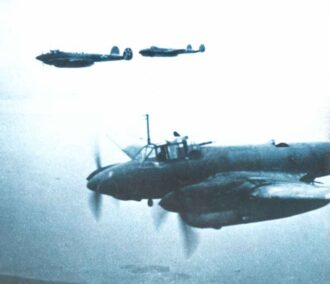 Comparable with the somewhat later Mosquito in performance, these are Pe-2FT models with PF engines. 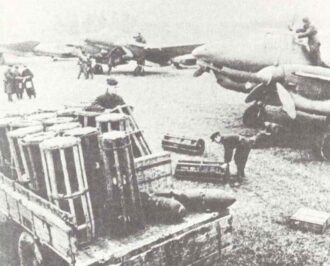 Unloading bombs for Petlaykov Pe-2 dive bombers on a airfield east of Nowosil during the Battle of Kursk in July 1943.

The open bomb doors give a clue to the remarkable internal load of 6,615 lb that could be carried by later models with the M-107 engine. There were many different types of nose and countless equipment and armament variations.