The Superfortress’ name will al­ways be associated with these two missions. But the large, modern four-engined aircraft also left other marks on aviation history, going down as the best strategic bomber of the war.
A total of 3,970 Boeing B-29s were built, of which 2,000 were delivered between 1943 and 1945. B-29s were also opera­tional in the Korean War and the type was not retired from service until the late 1950s. And, oddly enough, it was the B-29 that re-established a balance of strategic air power between the USSR and America during the Cold War. Three Superfortress bombers went down in Soviet territory in 1944, and after the war the Russians developed a whole series of long-range bombers from these three aircraft. The first Russian models, designated Tu-4, were identi­cal to the B-29.

Development and mass production of the Boeing Model 345, later named B-29 Superfortress, was one of the biggest tasks in the history of aviation. This history began in 1937, when the XB-15 (Boeing Model 294) appeared. Four years earlier the USAAC had asked for a strategic bomber that could carry 2,000 pounds (907 kg) of bombs a distance of 5,000 miles (8,000 km). This aircraft never got beyond the prototype stage, but Boeing’s engineers derived several ex­perimental projects from it. These were developed early in 1940, when the Army Air Corps again issued specifi­cations for a long-range bomber.

This new aircraft, the Model 345, was submitted alongside Consolidated, Douglas and Lockheed designs, and the Boeing bid was accepted. On August 24, 1940, two prototypes were ordered, followed by a third and a static-test airframe in December.
As the war grew in intensity, this program was given maximum priority. In January 1942 the military authorities ordered 14 YB-29 pre-production air­craft, followed immediately after by orders for 500 production machines. In September 1942 1,000 more were ordered.

The first prototype took to the air on September 21, 1942, with Eddie Allen at the controls. The second prototype first flew on December 28, but on February 18, 1943, this aircraft crashed on landing after fire broke out in an engine. All eleven Boeing flight-test staff aboard were killed.

The B-29 was a large mid-wing monoplane with a circular-section fuselage. Fully pressurized except for the bomb bay, it was powered by four 2,200 hp Wright Cyclone radial en­gines with turbo-superchargers. Defen­sive armament consisted of ten heavy machine guns and one 20 mm cannon installed in four remotely controlled turrets and on a manual mounting in the tail. Later models of the B-29 had a forward dorsal turret with four 12.7 mm machine guns.

In February 1942, while the pre-production models were being built and Boeing engineers worked night and day on the huge technical problems, the company prepared a vast production plan under which the bomber would also be built by Bell, North American and Fisher (General Motors) and Martin under license.
Martin came in later and by VJ-day more than 3,000 Superfortress had been delivered. This was a fantastic achievement because each represented five or six times the technical effort of any earlier bomber. In engine power, gross weight, wing loading, pressurization, armament airborne systems and even basic structure the B-29 set a wholly new standard.

Meanwhile, the 58th Very Heavy Bombardment Wing became the first unit to use the new strategic bomber.
Late in 1943 it was decided not to employ the Superfortresses in Europe but to concentrate them in the Pacific, where the 20th Bomber Command was ready to attack Japanese objectives from bases in India and China. The first aircraft reached these bases in the spring of 1944, and the first strategic mission set out for Bangkok on June 5.

Ten days later a B-29 force carried out the first strategic bombing mission against Japanese territory. That summer five other bases were readied in the Marianas: two in Guam, two in Tinian and one in Saipan. It was from these bases that the Superfortresses took off on their most devastating missions. The first raid on Tokyo took place on Novem­ber 24, 1944. By 1945 20 groups from the Marianas were sending 500 B-29s at a time to flatten and burn Japan’s cities.
Until August 6, 1945, the B-29s specialized in incendiary raids, first by day and then at night and at low altitude. There was little that Japanese fighters could do against them, and among the cities bombed by the B-29s were Tokyo, Nagoya, Osaka and Kobe.

The B-29C had all guns except those in the tail removed, increasing speed and altitude. After the war there were 19 variants of B-29, not including the Washington B.I supplied to help the RAF in 1950 to 1958.

Pictures about B-29 Superfortress 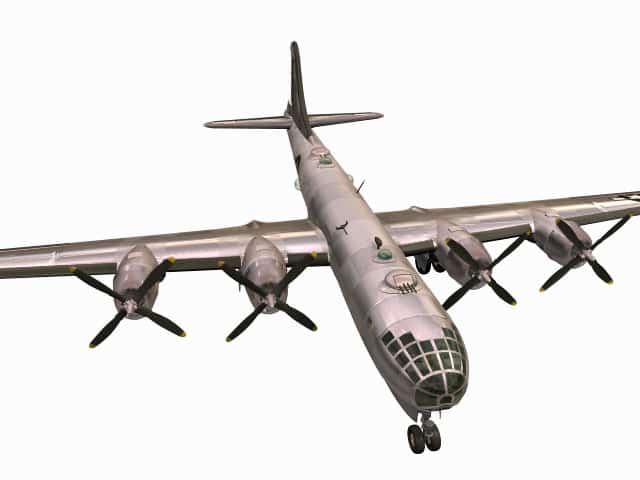 3D model of B-29 Superfortress 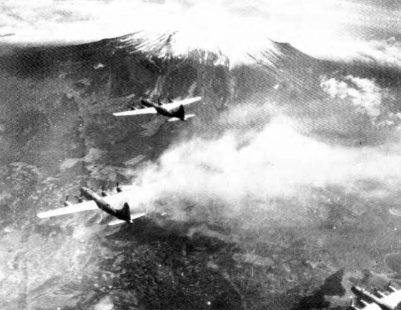 This later pic shows B-29 in front of Mount Fuji. 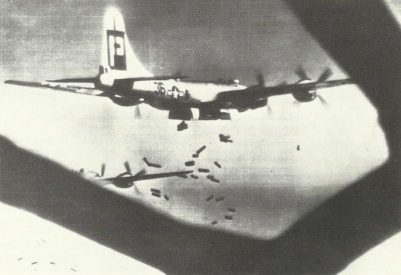 A B-29 Superfortress showers incendiaries on a Japanese city. 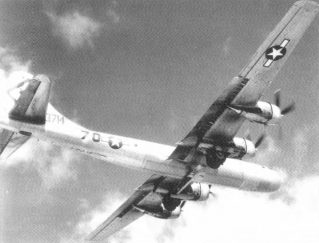 B-29 with ground scanning radar is climbing out from one of Guam’s airfields.

This B-29 was forced down at sea en route to Saipan after bombing the Mitsubishi aircraft factory at Nagoya. 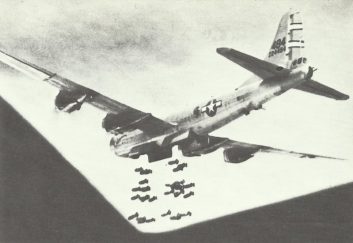 A B-29 throws bombs over Japan. 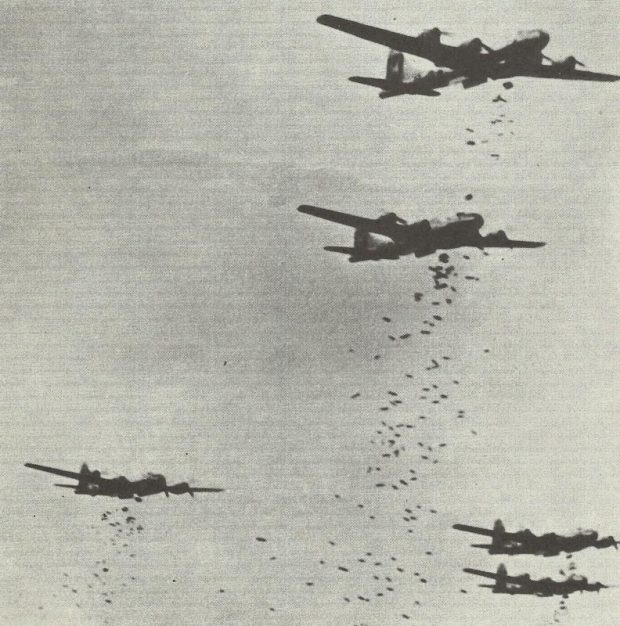 Dropping of incendiary bombs by B-29 Superfortress on a Japanese city. 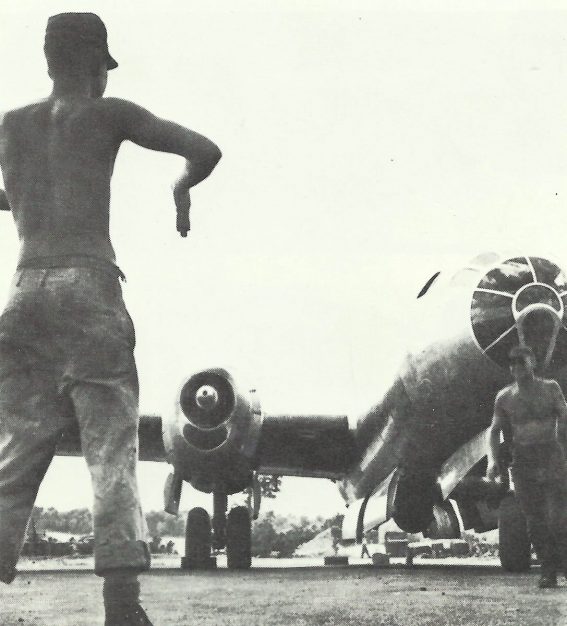 Before takeoff for a practice flight of a simulated atomic bombing attack on Tinian in early August 1945. 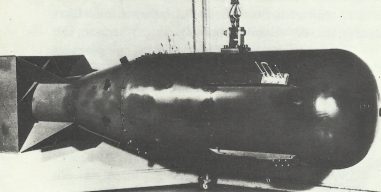 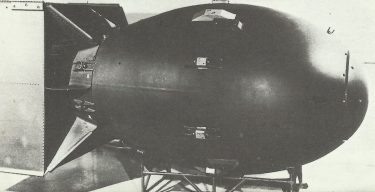 The Japanese city of Hiroshima after the dropping of the first atomic bomb.

Specifications for Boeing B-29 Superfortress

Animated 3D model of B-29 Superfortress