It is not without a certain irony that some first bombers of the German Luftwaffe were planned, developed and built under the guise of civil machines, while the Dornier company designed a pure civil aircraft with the Do 17. However, this was then rejected by Lufthansa as unsuitable.

The Do 17V1 was originally developed as a high-speed mail aircraft with limited space for up to six passengers. The first of three prototypes flew in autumn 1934 with two 600 hp BMW V1 engines and a single fin and rudder.
Unfortunately, the fuselage of the aircraft was so narrow that passengers had to have exceptional mobility to reach their seats.

After the Do 17 had been rejected by Lufthansa mainly for the latter reason, the future of the aircraft looked bleak.
But the rescue came with Robert Untucht, who assumed that the plane could be a good bomber. Captain Untucht was a former employee of the Dornier company and meanwhile employed at the Reichsluftfarhtministerium RLM (air ministry) and at the same time chief test pilot at Lufthansa.

The Do 17 was modified in such a way that it had a glazed fuselage, defensive armament, an internal bomb bay as well as double fin and rudder arrangements.
The bomber prototypes flew for the first time in 1935 with BMW and Hispano Suiza engines. Two versions were then ordered in series: the Bomber Do 17E-1 and the long-range reconnaissance aircraft Do 17F-1, both with 750 hp BMW VI 7.3 engines.

The Do 17E-1 was capable of carrying a bomb load of 1,650 lb (750 kg) and was only lightly armed with two machine guns. In contrast, the Do 17F-1 was equipped with cameras and had an increased fuel capacity. Both machines were taken over by the German Luftwaffe in 1937.
The Do 17E and F were used in the Spanish Civil War, where they were able to operate successfully in daylight thanks to their speed.

Further development led to the Do 17M bomber with two 900 hp Bramo Fafnir 323A-1 engines. The Do 17M had a crew increased from three to four men, a bomb payload increased to 2,205 lb (1,000 kg) and a defense armament of four machine guns.
In parallel, the Do 17P-1 reconnaissance bomber was also produced with the improved 865 hp BMW 132N radial engines.
Until September 1938 a total of 580 Do 17E, F, M and P were built for the German Luftwaffe.

In spring 1937 a prototype of the Do 17M with the powerful DB600 engines was presented at the International Military Aviation Show in Zurich. There, the aircraft was an outstanding sensation, as it flew away from every fighter shown there.
Therefore, the export version from the M-series, the Do 17K with 980 HP strong Gnome-Rhone 14 engines was developed. Dornier delivered 20 of them to Yugoslavia and another 50 were built there under license. After the Balkans Campaign in April 1941, many of them were taken over by the new Croatian Air Force and deployed at the Eastern Front.

Until now, all Do 17 aircraft had used the narrow and small stepped cockpit of the original civil version. Combined with the narrow fuselage, this meant that all early Do 17 designs suffered from the problem of weak defensive armament because there was no room for additional defensive machine guns.

This led to a completely new design and redesign of the nose and cockpit area, which was enlarged over the sides of the narrow hull and largely glazed. This new design became characteristic for all subsequent Dornier bombers.
This enabled more crew members with better ergonomics, a strengthened defensive armament, which could now also be accommodated in fire positions to cover the sensitive ventral and dorsal sides of the aircraft.

The Do 17S was the first version with these characteristics and flew for the first time in 1938 with Daimler-Benz DB600 engines. Fifteen Do 17U scout bombers followed shortly before the ultimate Do 17Z was released, which became the main production version.

The pre-series version Do 17Z-0 and the first production machines Do 17Z-1 appeared at the end of 1938, but proved to be underpowered. The following Do 17Z-2 was powered by 1,000 hp Bramo-Fafnir 323P engines, had a crew of five, a bomb payload of 2,205 lb (1,000 kg) and a defensive armament of six 7.92 mm machine guns.
The Do 17Z-2 now had at least a respectable performance and was faster than the contemporary He 111 types, but still significantly slower than the newer Ju 88 bomber, while normally carrying only half the bomb load of the other two types.

These medium-sized bombers took part extensively in the operations of the Luftwaffe in the Polish campaign 1939, at the Operation Weser Crossing in Norway, at the Western campaign, in the Battle of Britain and in the Balkans Campaign. In Britain as well as in Germany the bomber was popularly baptized as ‘The flying pencil’ or in German as ‘Der Fliegende Bleistift’. 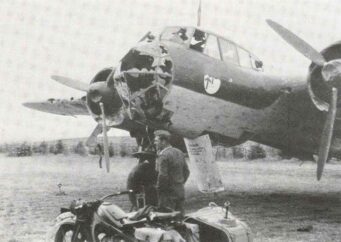 Sergant Stephani of II/KG76 was attacking an ammunition carrier in low altitude on this day when the vehicle blew up. Badly shaken, the crew managed to get the Dornier Do 17 back to the airfield of Vogelsang. 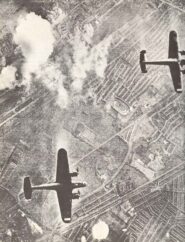 German Dornier Do 17 bombers were flying over the fires in London, caused from the first wave. 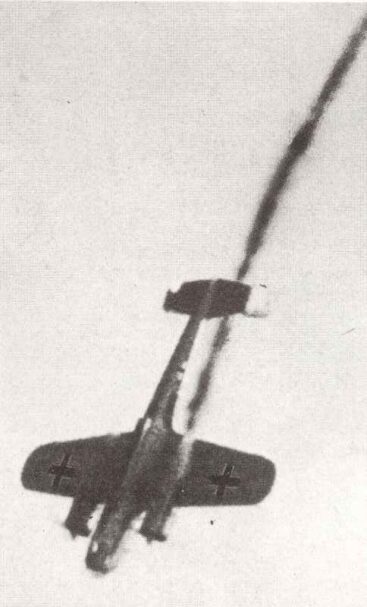 This Dornier Do 17 bomber was a victim of that day. 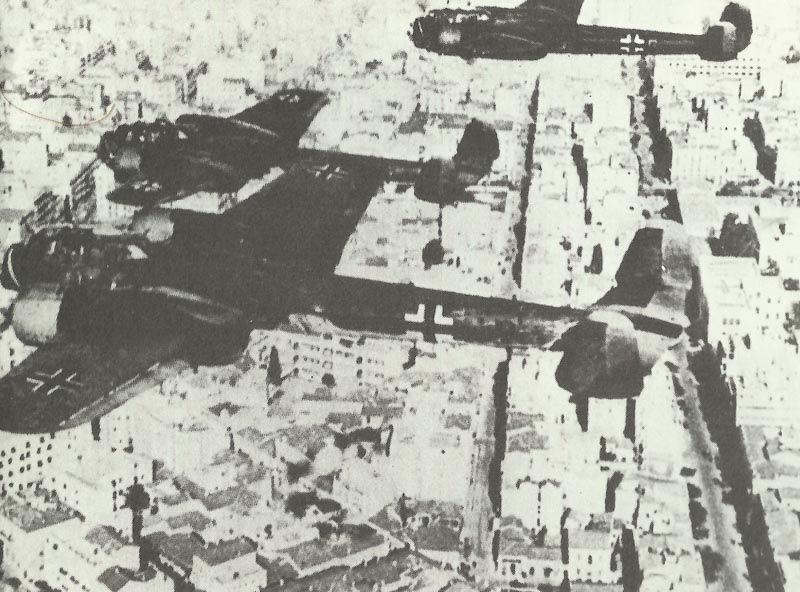 Medium Dornier Do 17 bombers during the victory parade flying over Athens.

In the first year of the Second World War the Do 17Z was the most popular and most reliable bomber of the Luftwaffe and had a large part in the success of the German twin-engine bombers in this time. In the Battle of England the Do 17 squadrons suffered high losses.
Already in July 1940 the production of the Do 17Z was stopped in favor of the Do 215. Until the turn of the year 1940-41 the ‘Flying Pencil’, as the Do 17 and Do 215 was called, proved to be much too sensitive to enemy fighters and production was shut down and completely stopped in January 1941. Instead, the much stronger and heavier new Do 217 was put into production at the end of 1940.

After the successful Airborne invasion of Crete, all remaining Do 17Z were transferred to the Russian border and on 21 June 1941 there were 133 Do 17Z in three combat groups ready to support Operation Barbarossa.
These were located in I/KG 2, III/KG 2 and III/KG 3, which were assigned to Stab/KG 2 in VIII Air Corps of Air Fleet 2.

They provided 14 percent of all twin-engine bombers in the units of the German Luftwaffe in the East. Until the end of 1941, the surviving Do 17Z were mostly withdrawn from the front units. Apart from the Croatian squadron, the only other bomber units with Do 17 on the front from 1942 on were those of the Finnish Air Force.

Another important aspect in the history of the Do 17 are the reconnaissance bombers of the German Air Force.
During the development of the Do 17Z, the Do 215 was designed in parallel on the basis of export orders from Sweden and Yugoslavia. The Do 215B used stronger engines than the Do 17Z with the 1,100 HP Daimler-Benz DB601A engines. Thus the aircraft was with 292 mph (470 km/hr) on 16,404 ft (5.000 meters) clearly faster than the Do 17Z-2 with 263 mph (423 km/hr) at the same altitude, otherwise however identical.

After the outbreak of the Second World War, the Do 215 was placed under an export embargo and the aircraft was taken over by the German Air Force as a long-range reconnaissance bomber. Of the 112 Do 215 aircraft built, only six were delivered to foreign air forces: two to the Soviet Union and four to Hungary.

On 21 June 1941, the majority of the remaining Do 215s were in the long-range reconnaissance groups provided for Operation Barbarossa.

There were two reasons for this: One, fast bombers can be converted quickly and easily with just a few changes for long-range reconnaissance missions. They were already fast and well-equipped with a defensive armament and instead of the bombs, additional fuel could simply be stored to increase the range.

Second, the Wehrmacht and Luftwaffe were strongly committed to the tactics of ‘offensive reconnaissance’, both on the ground and in the air. The reconnaissance units should therefore always be fully combat-capable.
In aerial warfare this meant that if the reconnaissance aircraft had an opportunity target, the pilot should also be able to decide whether to attack it. Of course, the aircraft had to be sufficiently armed for it.

As a result of this tactic, many German long-range reconnaissance groups were equipped with unmodified bombers or fighter bombers. These included the Ju 88A-4 standard bomber, but also versions converted to reconnaissance aircraft, which still carried offensive weapon loads. Among the latter were the Dornier Do 215B-1, Do 17P-1 and Me 110 C-5.
For example, the Do 215B-1 could carry a 1,104 lb (500 kg) bomb as a reconnaissance bomber with a range of 932 miles (1,500 kilometres) – or alternatively fly 1,519 miles (2,446 kilometres) as a pure reconnaissance plane.

12 Do 215 were later converted to Do 215B-5 long-distance night fighters with a disguised nose with two machine cannons and four machine guns and used over Great Britain and from October 1941 from Sicily.